Oregon Eliminates The Tigers From 2017 WCWS 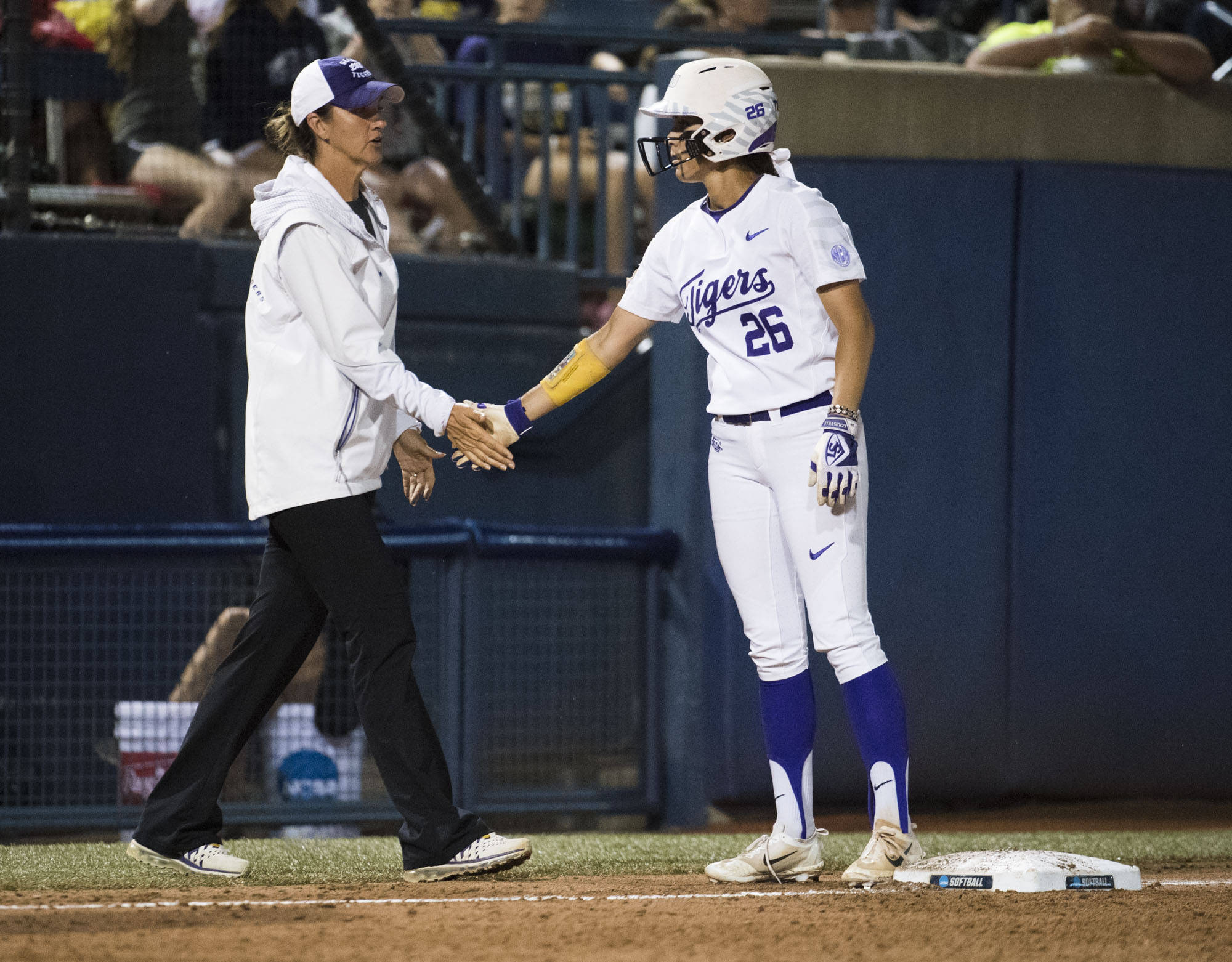 OKLAHOMA CITY – Oregon’s Gwen Svekis hit a two-run home run in the bottom of the first inning and the Ducks went on to a 4-1 win over LSU in a Saturday night elimination game at the Women’s College World Series at USA Hall of Fame Stadium-OGE Entergy Field.

Oregon, 54-7, advanced to the bracket championship game against Oklahoma Sunday at 2:30 p.m. Oklahoma needs just one win to go to the best-of-3 championship series that starts Monday. Florida and Washington meet in the other bracket final at noon. Florida needs one win to advance to Monday.

The Tigers go 1-2 in this year’s WCWS, their third straight appearance, and finished the year at 48-22. Allie Walljasper pitched 2.2 innings before leaving the game after a batted ball hit her pitching hand. She gave up six hits and three earned runs before leaving. She finished the season with an 18-6 record.

Carley Hoover came in to pitch the remainder of the game and gave up just one run and three hits in 3.1 innings.

Megan Kleist took the win for Oregon to go to 21-4. Kleist went the distance and gave up a run and five hits while walking none and striking out nine.

After LSU stranded a runner at first in the top of the inning, Oregon tallied quickly in the bottom of the first with one out as Alexis Mack singled and then Sevekis hit the first home of the postseason for the Ducks to left field to get Oregon a 2-0 lead they would never relinquish.

But the Tigers were ready to answer right back in the top of the second as Shemiah Sanchez blasted one on a curve down the left field line that flew past the foul pole and landed past the ESPN camera stand next to the line to cut the game to 2-1. But the Tigers could get no more in the inning.

It was Sanchez’ second homer of the season and the first since Feb. 23 against Bethune-Cookman.

Oregon added to the lead in the bottom of the third as Alexis Mack, who scored on Svekis’ home run, grounded to Sanchez at third who threw wide of first and when the ball was finally picked up, Mack ended up on third with a great slide to avoid the tag. It was ruled a hit and an error. Walljasper got Svekis this time with a swinging strikeout, but Nikki Udria hit the first pitch through the right side driving in the run from third to make it 3-1.

Shannon Rhodes is then hit with a 1-0 pitch and Mia Camuso drives one back to the circle that goes off Walljasper’s bare hand and bounces away for a single to load the bases. Beth Torina came out to the circle and Walljasper was in obvious pain after trying to throw a couple of warmup pitches. Torina brought Walljasper out of the game and Hoover came in off the bench.

Hoover kept the game at 1-0 as she was able to get Sammie Puentes to hit a ball back to the circle that Hoover took on the short hop and threw to first for the third out to keep it at 3-1.

An LSU record was solidified in the fourth inning as Bailey Landry with an infield single to third recorded her 92nd hit of the year, breaking the tie with her and Ashlee Ducote (2000) at 91. Landry had 91 Friday in the loss to Florida.

After an Amanda Doyle strike out, Sanchez sent one bouncing toward right field that the second baseman couldn’t come up with. It was scored a hit putting runners on the corners and giving LSU a threat with one out. Constance Quinn and Sydney Springfield both struck out to end the half inning.

Oregon threatened in the bottom of the fourth but didn’t tally anymore, but in the fifth, Udria was hit on ball four and advanced to second on a two-out wild pitch. Camuso singled to left and Aliyah Andrews throw was off the mark as Udria scored from second to make it 4-1.

Kleist dominated from there as after Amber Serrett‘s single to open the fifth, she retired the final nine batters to end the game.

WCWS NOTES — Oregon is now 6-9 in its five appearances and will playing in the WCWS semifinals for the second time in program history. LSU, in its third straight appearance in Oklahoma City, fell to 11-12 all-time at the WCWS … Sanchez was 2-for-3 to lead the Tigers at the plate, while Sahvanna Jaquish and Amber Serrett also provided LSU hits in the loss.