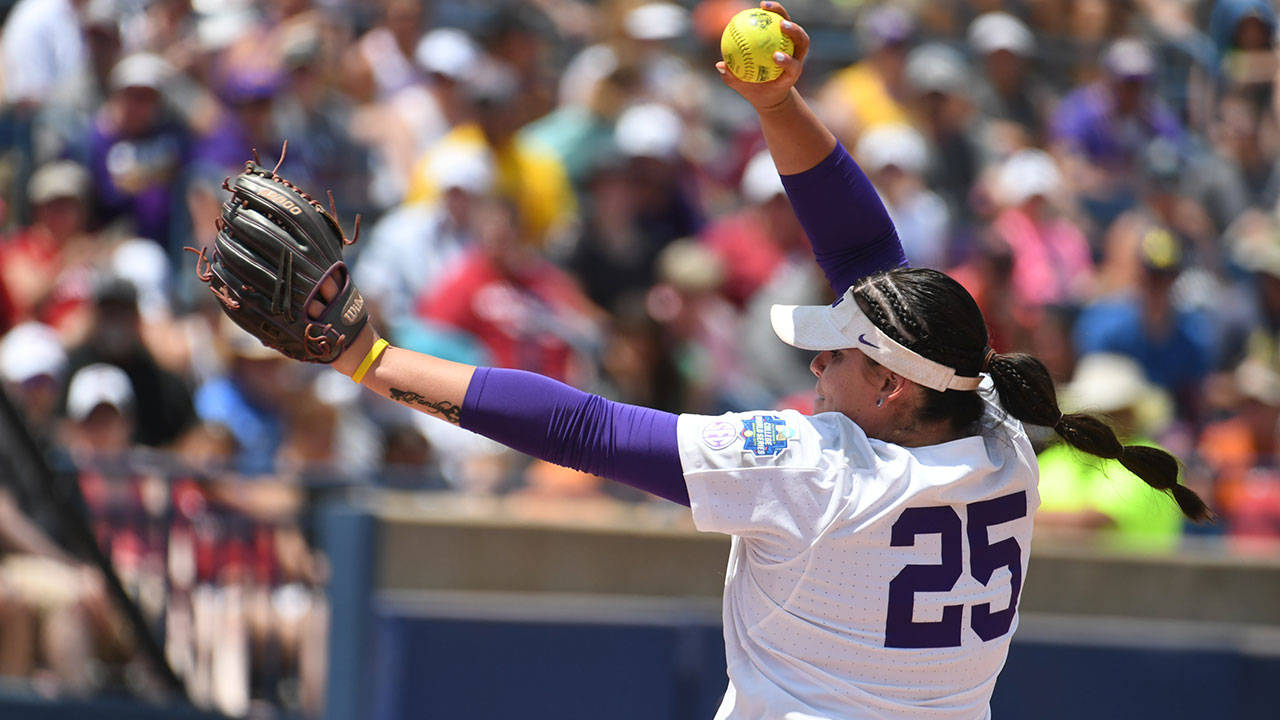 OKLAHOMA CITY — Sahvanna Jaquish got LSU a run with her bat, saved a run with a tag at the plate and then Constance Quinn posted what would be the decisive run as the Tigers made a successful 2017 Women’s College World Series Thursday at ASA Hall of Fame Stadium-OGE Energy Field.

Allie Walljasper had no strikeouts, but didn’t need them as the pitcher went the distance and worked out of a couple of jams as LSU scored a 2-1 victory over UCLA.

The Tigers (48-20) advanced to face Florida in the first of the winner-winner games on Friday at 6 p.m. Florida was an 8-0 winner over Texas A&M in a game halted after five innings because of the eight-run rule. Texas A&M and UCLA will meet in the first game on Saturday’s four-game schedule.

Friday’s game will be broadcast on ESPN and on the LSU Sports Radio Network (107.3 FM in Baton Rouge) with Patrick Wright on the call.

Walljasper improved to 18-5 on the season going seven inning, giving up eight hits with one earned run one walk in 93 pitches. First baseman Amanda Doyle had 11 put outs in the game and third baseman Shemiah Sanchez had six assists.

“I loved my team’s fight. I love how they continued to punch. I thought unbelievable tone we set there with Emily Griggs and Sahvanna (Jaquish) right there with back-to-back doubles. I think that was a huge part of the game right there,” said LSU Coach Beth Torina afterwards. “And then Allie Walljasper did what Allie Walljasper does, and that’s give us a chance to win every ballgame she’s ever a part of.”

Quinn was a part of two decisive plays in the game, the first coming in the second inning with LSU leading 1-0 after the Tigers opened the game with back to back doubles by Griggs and Jaquish off UCLA starter and eventual losing pitcher Rachel Garcia (22-8).

In the bottom of the second inning, Garcia opened with her 12th double of the year. Gabrielle Maurice and Bubba Nickles both popped up for out. Eight-hole hitting Paige Halstead dribbled one that Quinn struggled to control right away and Garcia rounded third and headed to the plate. Quinn gobbled up the ball behind second base and threw a strike to Jaquish who tagged Garcia out on a close bang-bang play at the plate to keep LSU up, 1-0.

UCLA would tie the game in the third inning as nine-hole hitter Zoe Shaw singled in the infield to open the inning. Delaney Spaulding (the only player in the UCLA lineup with two hits) singled to right field to put runners at first and second with no outs. Kylee Perez then sacrificed to advance the runners to second and third with one out.

Shaw would score on a ball off the bat of Brianna Tautalafua. The third baseman for UCLA tried to drive one past Walljasper but the LSU pitcher was able to control it enough to get the out at first. The runners were on the move and Spaulding advanced to third with the go-ahead run. Jelenicki flied to center field to end the third with the game tied at 1.

Both pitchers got much needed 1-2-3 innings in the fourth, but in the fifth decisive plays and calls would give LSU their much needed second run. Quinn opened with a 3-2 count single through the left side and moved to second on a Sydney Springfield sacrifice bunt.

Amber Serrett would take the very next pitch to the outfield for a single and Beth Torina waved Quinn home. Catcher Halstead appeared to put her knee on the ground as the throw was coming in, potentially blocking the plate from Quinn. Quinn and Halstead crashed together in the plate area, but the only call that home plate umpire Leah Bowan made was the left arm extended with the fist close signaling obstruction or interference then giving the safe sign posting Quinn’s run on the board, giving LSU a 2-1 lead.

UCLA Coach Kelly Inouye-Perez argued the call as did a UCLA assistant with the third base umpire, but the call stood.

The Bruins tried to answer back in the fifth inning as Shaw walked and Spaulding singled to right field. LSU was able to get the lead runner out on a fielder’s choice on a ball hit to third for the second out and then Tautalafua popped out to first to end the inning.

UCLA also left two runners on base in the sixth inning as after two outs Maurice and Nickles singled. Halstead then drilled one at Walljasper who calmly found the ball in her glove to end the threat and the inning.

That was the Bruins last good threat as they went quietly 1-2-3 to give the Tigers the victory.

WCWS GAME NOTES – LSU improved to 11-10 overall at the WCWS, moving to 3-3 all-time in WCWS opening games, winning their first since defeating Auburn, 6-1, in 2015 … It is the fifth straight WCWS loss for UCLA dating back to 2015 … Jaquish’s first inning RBI now gives her 268 RBI ranking 10th all-time in NCAA history. The senior catcher is two RBI shy of setting the SEC record … Quinn led LSU with a 2-for-3 performance at the plate … Attendance for the opening session of the WCWS on a warm late spring afternoon was 8,428.