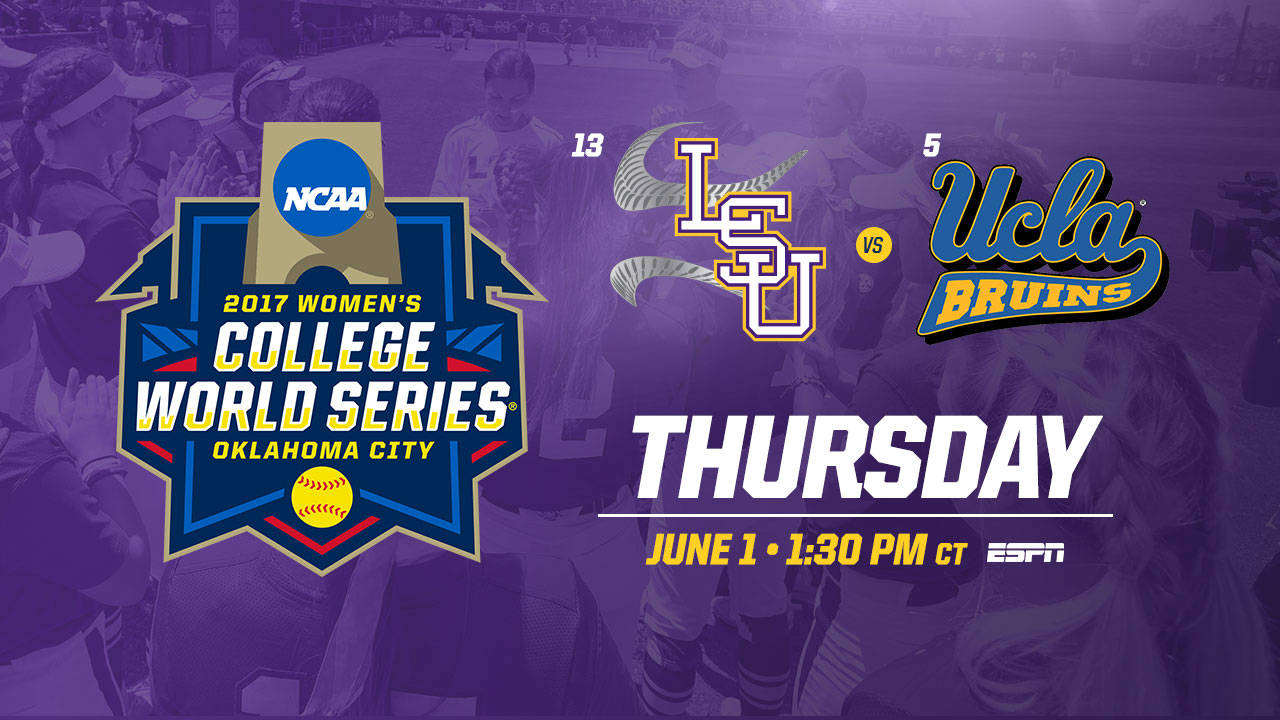 OKLAHOMA CITY – No. 13 seed LSU (47-20) will make its sixth appearance in the Women’s College World Series when it takes on five-seed UCLA in the opening game at 1:30 p.m. CT Thursday at ASA Hall of Fame Stadium – OGE Energy Field.

The game will be broadcast live on ESPN with Adam Amin, Amanda Scarborough and Laura Rutledge on the call. Fans can also watch the game live on WatchESPN.com and the Watch ESPN app.

Patrick Wright will have the call of LSU’s games at the Women’s College World Series on 107.3 FM in Baton Rouge and live at LSUSports.net/live.

“I think every time we’ve been to Oklahoma City we try to learn more and get better,” head coach Beth Torina said. “I think it really takes a learning curve since it’s different than we do everything all season long.”

“This team has had some ups and downs so it’s great to see them fight through it and never give up. It’s impressive what they’ve done the past few weeks with their grit and mental toughness. UCLA is talented though with a good offense and great pitcher so we will have to bring our best game if we are going to take them out in the first round.”

The trip to Oklahoma City marks the third in a row and fourth in six years for Torina. With victories at Florida State to secure her team’s spot at the Women’s College World Series, Torina reached the 400-win milestone for her career as a head coach.

The Tigers survived Tallahassee after dropping the opening game to the Seminoles, 3-1. With its back against the wall, LSU snapped FSU’s 36-game win streak at home to move the series to a winner-take all game. On Sunday, the squad made it out of Tallahassee with a 6-4 victory to take two of three from the Seminoles.

Carley Hoover and Allie Walljasper combined for a 2.45 ERA in three games against one of the top offense in the country. Walljasper threw a one-hit shutout on Saturday to keep the Tigers’ dream of OKC alive. Over the weekend, four Tigers hit over .300 with Aliyah Andrews leading the way with a .429 average.

Senior Sahvanna Jaquish had two of the most clutch hits of the weekend with a two-RBI single and two-RBI double on Sunday. Jaquish moved into the top-10 in NCAA Career RBI with 267. The four-time NFCA All-American, the first in school history, is just three RBI away from setting the Southeastern Conference record for career RBI.

Fellow senior Bailey Landry also made history on the weekend. Landry laced a RBI triple in the top of the seventh inning to push her career hits total to 291. The mark is a new LSU record and the Louisiana native is just two hits away from setting the single season hits record.