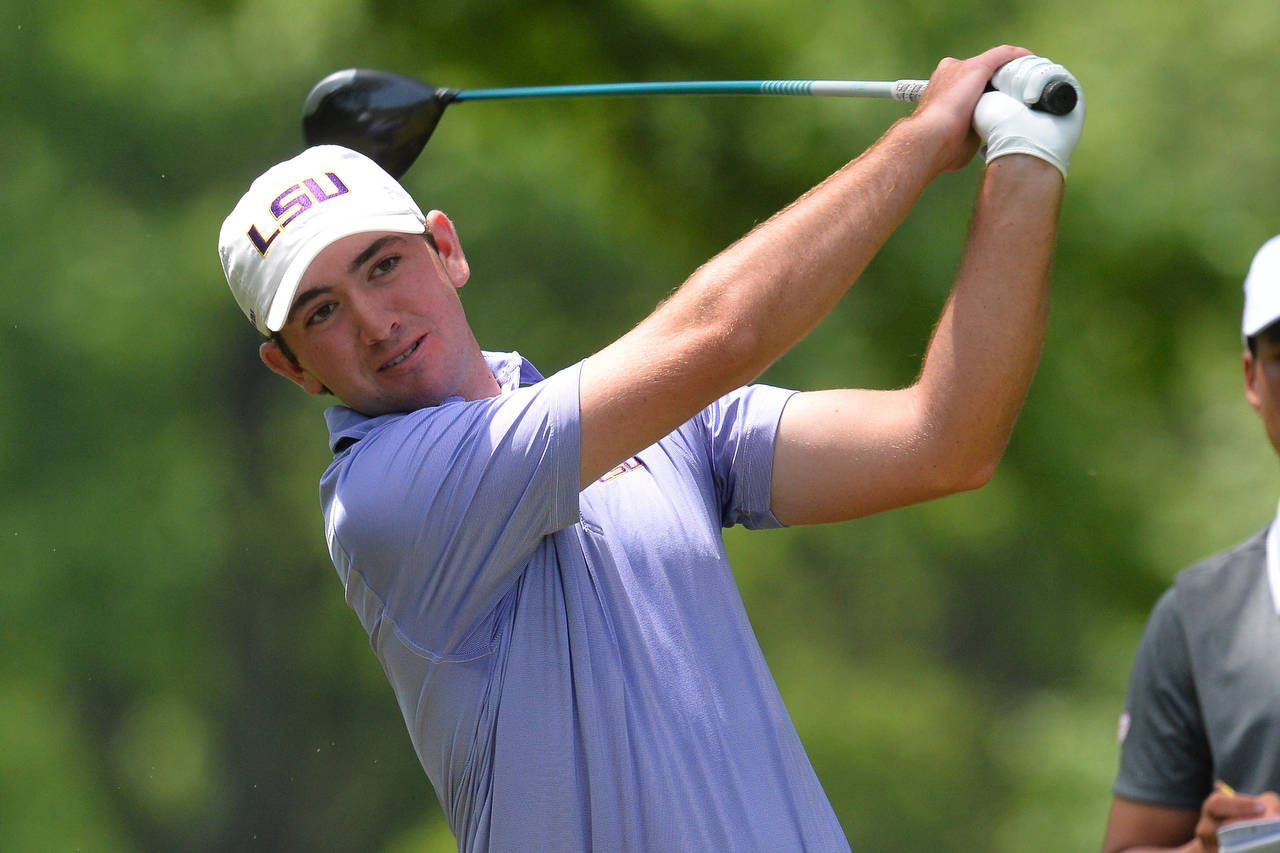 SUGAR GROVE, Ill. – With senior Brandon Pierce and freshman Philip Barbaree firing matching 4-under 68s and sophomore Sam Burns adding a 3-under 69, No. 6 seed LSU climbed 10 spots in the team standings into a tie for seventh place following Saturday’s second round at the 2017 NCAA Division I Men’s Golf Championships.

The Tigers positioned themselves just six shots off the lead in the race for match play with the lowest team round of the day with an 11-under par 277 for a 36-hole score of 8-under par 568.

After arriving at Rich Harvest Farms Golf Club sitting at 3-under par from a suspended first round on Friday, the Tigers dropped six shots over their final three holes to close out an opening score of 3-over par 291 to end the round in 16th place in the standings. They immediately teed off in the first wave off the back nine in the second round and turned in an 11-under par 277 to claw back into the hunt for match play.

Half the field will be cut following Sunday’s third round as 15 teams advance to a fourth and final round of stroke-play qualifying on Monday. The field will again be cut to the top-eight teams after 72 holes in stroke play with single-elimination match play deciding the national champion. The quarterfinal and semifinals rounds of match play are set for Tuesday with the NCAA Championship Match following on Wednesday.

UNLV finds itself in the driver’s seat for the No. 1 seed at the midway point of qualifying as it tied Oklahoma for the second-lowest score of the day at 9-under 279 for a one-shot lead at 14-under par. The Sooners sat a shot back in second place with a two-day total of 13-under par.

Nipping on their heels in current top eight of the team standings were Illinois in third place at 11-under par, Auburn and Vanderbilt in a tie for fourth place at 10-under par, Southern California in sixth place at 9-under par, Baylor in a tie with LSU for seventh place at 8-under par. Rounding out the Top 10 are Oklahoma State in ninth place at 7-under par and Virginia in 10th place at 5-under par.

The Tigers will play alongside Baylor for the third-straight day as they are also set to be joined by Oklahoma State in Sunday’s third round in the first wave off the back nine beginning at 6:45 a.m. CT.

“These guys are mentally tough, and they proved it again today,” said LSU head coach Chuck Winstead of his team’s bounce back in Saturday’s round. “True to their form, they rallied. They got back in the second round and really played some outstanding golf. Hopefully we can carry that momentum into the third round.”

What a time for Barbaree to fire his lowest round of the 2017 spring season as he was the first Tiger in the clubhouse in the second round with a bogey-free round of 4-under par 68. He eclipsed his previous best round in relation to par when he opened the Louisiana Classics in February with a 2-under 70. Barbaree also carded back-to-back rounds of even-par 70 in the first two rounds at the SEC Championships.

Teeing off from the back nine to open his second round, Barbaree birdied the par-three 13th to get to 1-under par and never looked back while adding birdies at the par-five 18th, par-five second and par-four eighth for a career-best 4-under 68. He catapulted himself 53 places up the leaderboard into a tie for 28th place at 2-under par through 36 holes.

Burns In The Hunt

Burns was off to a shaky start Saturday as he gave away three shots with a double bogey at the par-four 17th and a bogey at the 18th to finish off a 1-under 71 in the first round as he sat 4-under par while returning early to the course with the rest of his teammates. He certainly turned it around in the second round while carding six birdies and three bogeys en route to a 3-under 69.

The Jack Nicklaus NCAA Division I National Player of the Year Award finalist wrapped up Saturday’s play well in contention for the NCAA individual title two shots off the pace in a tie for 17th place at 4-under 140.

Burns finished play Saturday four shots off the pace set by Texas’ Scottie Scheffler, who fired back-to-back rounds of 4-under 68 to grab the 36-hole lead at 8-under 136. Ole Miss’ Braden Thornberry, USC’s Justin Suh, Vanderbilt’s Matthias Schwab and Kent State’s Bjarki Petursson finished one shot back in a four-way tie for second place at 7-under par 137.

Pierce recorded his best score in 10 career rounds at the NCAA Championships on Saturday as he matched Barbaree with a team-leading 4-under 68 for the weekend. Pierce had previously shot consecutive 1-under 71 scores in the first and second rounds in 2015 and back-to-back 1-under 69s in the third and fourth rounds last spring.

His scorecard was littered with a team-best seven birdies against three bogeys for a final score of 68, moving 40 spots up the leaderboard into a tie for 19th at 3-under par through 36 holes. Pierce struggled to wrap up a 1-over 73 in the morning’s conclusion to the first round as he made a triple bogey at the par-four 17th after returning to the course at 2-under par for the round.

Pierce fired out of the gate in the second round with consecutive birdies at Nos. 10 and 11 before giving both shots back with bogeys at Nos. 13 and 17. He then made the turn at 1-under par with a birdie at the par-five 18th before moving to 5-under par for the round with four more birdies at Nos. 2, 3, 4 and 7. He closed out a round of 4-under par 68 with a bogey at the par-four ninth to tie for 19th place overall.

Pierce has certainly been a strong finisher at the NCAA Championships in recent seasons as he led LSU in a tie for 11th place as a sophomore before tying for 26th place in his second appearance a year ago.

Rounding Out The Lineup

Senior Eric Ricard counted a round of even-par 72 toward LSU’s team score of 11-under 277 in the second round after finishing off a 3-over 75 in the morning. Ricard ended Saturday’s play in a tie for 80th place overall at 3-over 147. Sophomore Luis Gagne followed his 1-over 73 in the first round with a 3-over 75 in the second to finish 36 holes tied for 93rd place on the board at 4-over par 148.