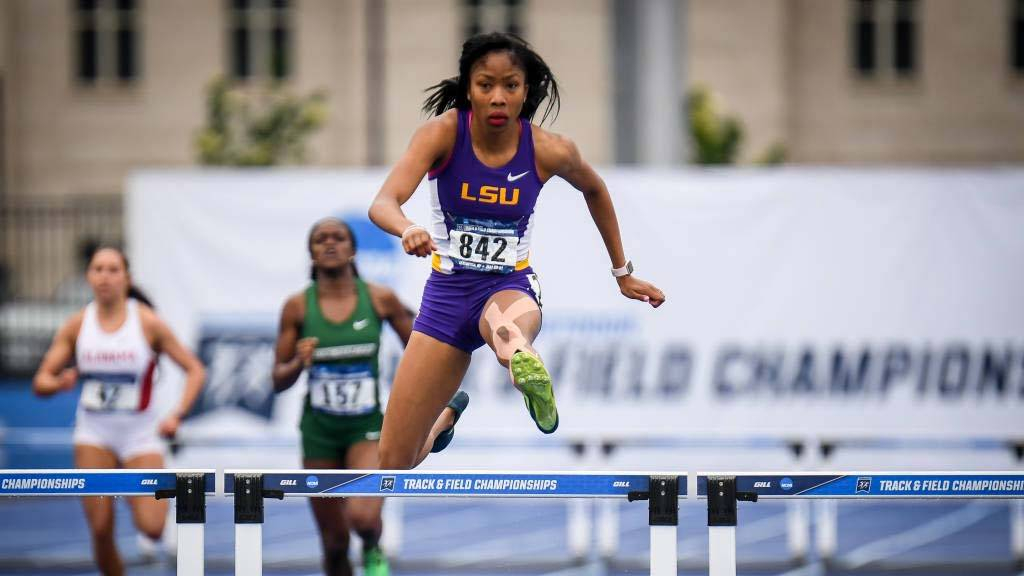 LEXINGTON, Ky. – Led by three heat-winning performances in Friday’s quarterfinals on the track, the LSU Track & Field teams added 12 semifinalists to their squad making the trip to Eugene, Oregon, in two weeks to highlight another successful day of qualifying at the 2017 NCAA East Preliminary Rounds in Lexington.

In addition, a combined nine qualifiers in the 100-meter hurdles and 200-meter dash earned a lane in Saturday’s finale at the NCAA East Prelims to close out another successful day of qualifying.

The Lady Tigers sent 15 to the starting line in preliminary and quarterfinal races on Friday and advanced all 15 to the next round of NCAA competition, including nine semifinalists to Eugene and six more to quarterfinals on Saturday. The Tigers advanced three each to NCAA semifinals in two weeks and quarterfinals to run Saturday at the University of Kentucky.

The top-12 finishers in each open and relay event at the NCAA East Preliminary Rounds in Lexington this weekend move on to the national semifinals in their respective events at the 2017 NCAA Division I Track & Field Championships returning to Oregon’s Hayward Field in Eugene yet again from June 7-10 to close out the collegiate season.

“In all honesty, it was a great day,” exclaimed LSU head coach Dennis Shaver. “Everybody we thought would advance did, and some that we didn’t think would advance got through. I thought they did what they had to do and didn’t do more than they needed to, which was to advance. If we can follow up with another strong day on Saturday, we’ll be in business.”

Jones and Misher set the tone for LSU’s teams in Friday’s quarterfinals as they were the first to advance to the NCAA semifinals on the day thanks to personal-best performances in the women’s 400 meters.

Jones took her mark in Lane 6 in the second quarterfinal heat with a personal best of 52.25 seconds to her credit already this season, while Misher lined up on her inside in Lane 3 with a best time of 52.75 run in the SEC final two weeks ago. They earned their lanes in the quarterfinals with times of 53.13 and 53.21, respectively, in the first round on Thursday.

In what proved to be the fastest 400-meter race of their careers, Jones slashed more than sixth tenths of a second off her PR with a heat-winning 51.63 to edge Alabama’s Domonique Williams (51.90) at the tape while Misher followed in fourth in the race with a time of 52.07 to cut nearly seven tenths of a second off her previous best. Tennessee Tech’s NaAsha Robinson was third in the heat with a time of 52.00.

Jones turned in the second-fastest time of the day to become the No. 8-ranked 400-meter runner in school history, while Misher punched her ticket to Eugene with the seventh-fastest in the quarterfinal round.

The Tigers made it a perfect 4-for-4 in 400-meter qualifying for LSU on the day as Cherry and Bruton both earned their trip to Eugene as automatic qualifiers with top-three finishes in their respective quarterfinal heats. Cherry crossed the finish line in 44.92 for second place in the second heat as he followed Auburn’s Akeem Bloomfield (44.74) with the second-fastest time of the day. Bruton then ran his seasonal best of 45.86 to move on in third place in the third heat and 11th place overall.

Of LSU’s six qualifiers running in Friday’s quarterfinals in the 100-meter dash, five reserved their seat on the plane to Eugene with the Lady Tigers advancing all four of Brisco, Hobbs, Hall and Johnson and Mitchell-Blake joining his Tiger teammates already qualifying for the national semifinals.

Brisco advanced as the fastest qualifier on the women’s side as she won the second quarterfinal heat with a time of 11.28 run into a strong headwind of -1.4 meters per second. Hobbs qualified automatically with a run of 11.32 (-1.0) for second place in the third heat, while Johnson also placed second in her heat with a time of 11.45 (-3.7) in the first section.

Hall clocked her first of two personal bests on the day as she followed Hobbs across the finish line in third place in the third heat with a wind-legal 11.34 (-1.0). She later qualified automatically for Saturday’s quarterfinal in the women’s 200-meter dash with her fastest wind-legal race as a Lady Tiger as she posted a 22.92 (+1.4) for second place in the first qualifying heat.

Johnson later advanced eighth overall from the first round of the 200 meters with a seasonal best wind-legal time of 22.90 (+1.3). Senior Jada Martin led the Lady Tigers in 200-meter qualifying with a time of 22.85 (-0.1) to win the sixth heat with the fifth-best time of the opening round.

Mitchell-Blake was the fifth-fastest qualifier in both sprint events on the men’s side as he clocked 10.26 (-0.2) for second place in the first heat of the 100 meters to advance to the semifinals in Eugene before posting a heat-winning 20.30 (+0.3) in the third heat of the 200 meters to qualify for Saturday’s quarterfinals in the event.

Joining Mitchell-Blake in the quarterfinal round of the 200 meters on Saturday will be senior Tinashe Mutanga and sophomore Jaron Flournoy as Mutanga ran a seasonal best of 20.64 (+1.4) for fourth in the first section and Flournoy qualified second in the fourth section with a time of 20.70 (+1.0) in the first round.

Payne arrived in Lexington for the NCAA East Preliminary Rounds with a personal-best time of 56.12 in the 400-meter hurdles that she set in winning the Texas Relays title nearly two months ago on March 31.

On Friday, she broke through the 56-second barrier for the first time in her collegiate career with a time of 55.50 to return to Eugene as the top quarterfinalist at the UK Outdoor Track & Field Complex. After Jade Miller of Harvard took over the top spot in the standings with a run of 56.17 to win the second heat, Payne pushed the pace in the third heat and won by seven tenths of a second over Auburn’s Sashel Brown (56.20).

Payne moved three spots up the national rankings with her breakthrough performance as she became the No. 3-ranked collegian in the event this season ahead of the semifinals to come at Oregon’s Hayward Field.

Payne wasn’t the only Lady Tiger to turn in a big personal best in the event while moving on to Eugene in the women’s 400-meter hurdles as Richardson qualified third in the second heat and eighth overall with her top time as a Lady Tiger of 57.24. Like Jones and Misher before her, Richardson took down her PR by more than six tenths of a second as she lined up with a best of 57.85 set as a junior in 2016.

Ruby Stauber has already enjoyed an outstanding freshman season at LSU as an All-American with a fifth-place finish nationally in the 800-meter final in her debut appearance at the NCAA Indoor Championship back in March. She also swept SEC Indoor and SEC Outdoor silver medals this spring as a two-time All-SEC performer in the event.

Stauber will continue her season in Eugene after she advanced to the NCAA semifinals for the first time with a run of 2 minutes, 4.24 seconds for the top timed qualifier in Friday’s quarterfinal round. Stauber posted an advancing finish of fourth place in the first heat and 10th place overall to lead a trio of timed qualifiers moving on to Eugene.

All three Lady Tigers lining up in the first round of qualifying in the women’s 100-meter hurdles moved on to Saturday’s quarterfinal round as junior Danielle Phillips and freshmen Tonea Marshall and Brittley Humphrey were among the 24 hurdlers advancing. Marshall opened by running the eighth-fastest time of the day at 13.22 for second place in the first heat, while Humphrey (13.40) and Phillips (13.46) advanced on time with a 4-5 finish in the fifth heat. Phillips’ 13.46 (+1.7) set a new wind-legal PR in the event.

The 2017 NCAA East Preliminary Rounds will come to an end Saturday as the Tigers and Lady Tigers look to round out LSU’s roster of semifinalists heading to Eugene with another strong day of qualifying at the UK Track & Field Complex. LSU’s teams will compete beginning at 1 p.m. CT beginning with the field events followed by the first quarterfinals on the track at 6 p.m.

ESPN3.com will stream Saturday’s finale live from 5-9 p.m. CT as fans can also watch the Tigers and Lady Tigers in action through the Watch ESPN app available on all smartphone and table devices. Live results of the last day of the meet will be provided by Flash Results as fans can follow online at http://www.flashresults.com.