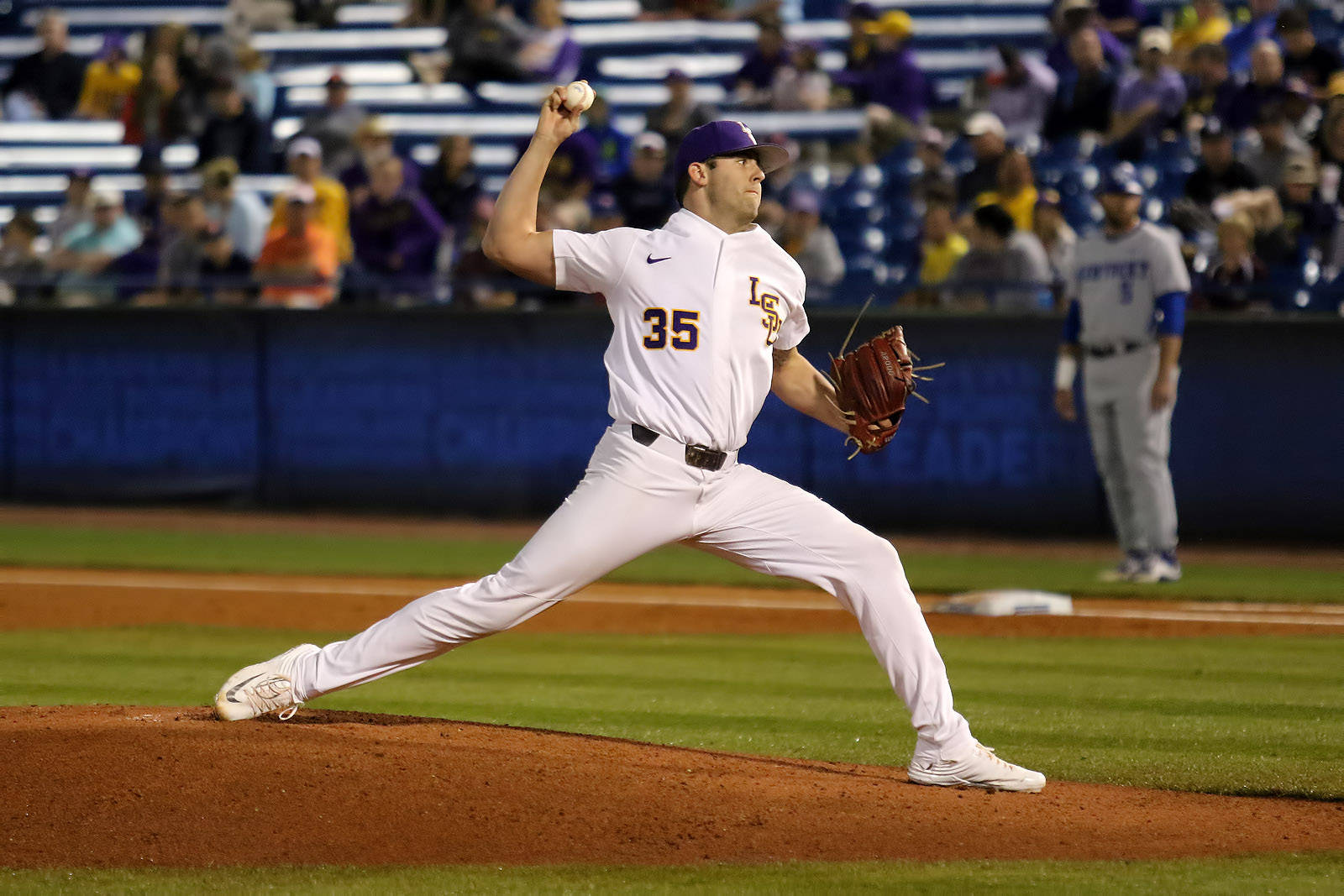 The game was stopped after Lange held Kentucky scoreless in the top of the seventh due to the SEC Tournament rule that states a game shall end after seven innings if a team has a lead of 10 or more runs.

LSU, which improved to 41-17 advanced to the SEC Tournament semifinal round for the fifth consecutive year. The Tigers will play on Saturday at Noon CT against the winner of Friday’s matchup between Kentucky and South Carolina.

Kentucky, which dropped to 39-19 with Thursday’s loss, will face South Carolina in an elimination game at 3 p.m. CT Friday.

LSU’s semifinal game on Saturday will be televised by the SEC Network, and it will be carried on affiliates of the LSU Sports Radio Network. The broadcast may also  be heard at www.LSUsports.net/live.

Lange, who improved to 8-5 on the year, blanked Kentucky through seven innings by allowing just six hits and recording no walks and seven strikeouts. Lange increased his career strikeouts total to 374 to move past Ben McDonald (373 Ks, 1987-89) into second place on the all-time LSU strikeouts list.

“It’s a true honor just to be mentioned in the same conversation with someone like Ben McDonald,” Lange said. “He’s had a remarkable career, and he’s been a big inspiration to me. Tonight was just a great team win, we came out prepared and we had a lot energy, and we played a great game.”

“Alex was extremely sharp tonight, and we played great defense behind him, particularly Zach Watson in center field,” LSU coach Paul Mainieri said. “Once we got a lead, Alex really turned it on, and he was able to finish what he started.”

Kentucky starter Sean Hjelle (9-3), the 2017 SEC Pitcher of the Year, was charged with the loss, as he surrendered 10 runs on 11 hits in five innings with no walks and 10 strikeouts.

Robertson led LSU’s 12-hit attack with two runs scored and four RBI, including a three-run  homer. LSU has scored 20 runs on 23 hits in its two SEC Tournament wins over Missouri and Kentucky.

“Today we played a great ball game in every phase,” Mainieri said. “But, it’s a humbling game, and we might see Kentucky again on Saturday when the score will be 0-0 again. We’ll get in a good practice tomorrow and get ready for the weekend.”