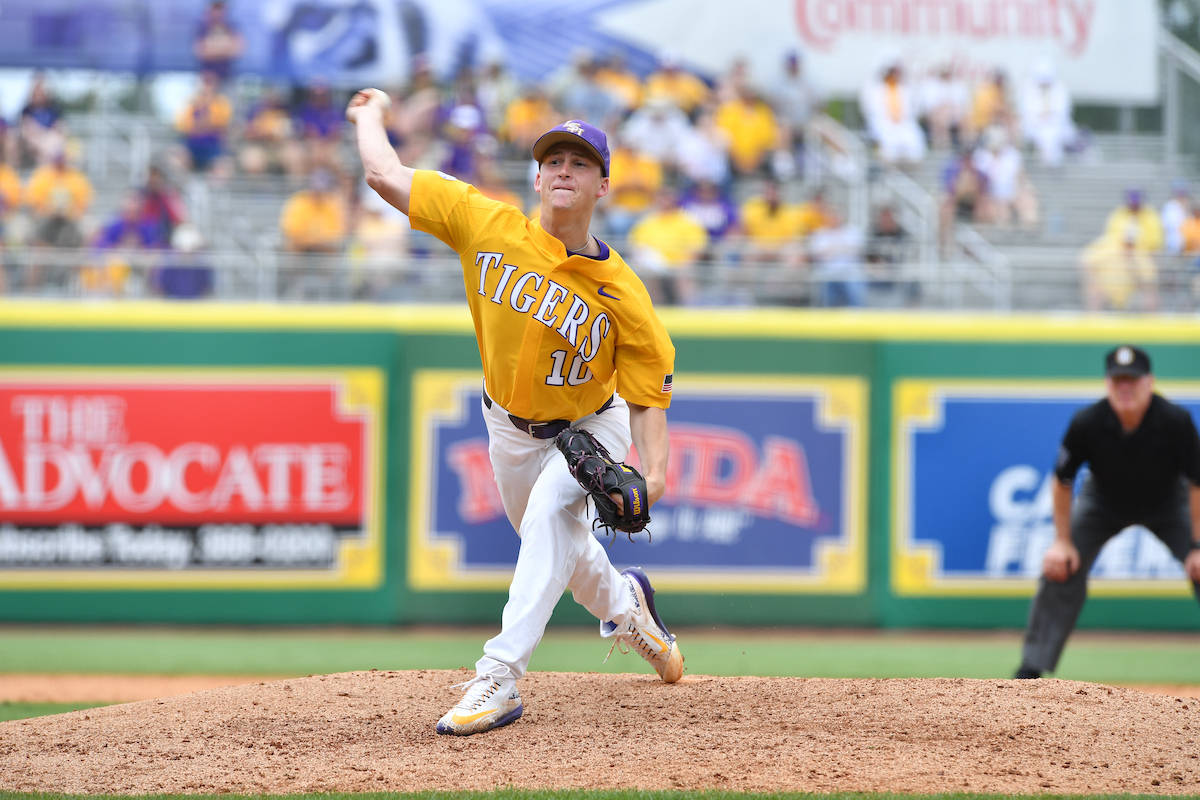 BATON ROUGE – Freshman Eric Walker took a no-hit bid into the eighth inning, allowing only one run on one hit in eight innings of work, as the No. 10 LSU baseball team completed the series sweep against No. 13 Auburn, 9-1, Saturday afternoon at Alex Box Stadium, Skip Bertman Field.

Walker earned the win to improve to 6-1 on the season. The right-hander walked three and struck out three in the outing.

LSU’s Nick Bush and Caleb Gilbert combined to pitch the ninth inning and allowed only one hit.

Auburn starter Casey Mize suffered the loss after throwing four innings. The right-hander fell to 6-2 on the seasonafter allowing five runs on six hits and striking out two.

The final home game of the season is against Northwestern State, Tuesday at 6:30 p.m. CT at The Box. The game will be televised on the SEC Network. It will also be broadcast live 98.1 FM in Baton Rouge only. Fans can also go to LSUsports.net for live stats and audio.

LSU jumped out to the 3-0 lead in the bottom of the second. First baseman Nick Coomes started the rally and led off the inning with a double to right field. Third baseman Josh Smith followed with a single to put runners on the corners, and designated hitter places a single through the right side to score Coomes. In the next at-bat, catcher Michael Papierksi dropped a sacrifice bunt, which drove in Smith and put Jordan on second with one out. After centerfielder Zach Watson singled through the left side, there were runners on the corners for Kramer Robertson who sent a sacrifice fly to right field to give the Fighting Tigers the 3-0 edge.

In the bottom of the fourth with Smith on second after a one-out double, Papierski hit his second home run of the series to give LSU the 5-0 lead.

The Fighting Tigers added three runs in the bottom of the sixth inning to extend the lead to 8-0. After Smith took a leadoff walk, the third baseman advanced to second and scored on a sacrifice fly to left field by Jordan. With runners in scoring position, second baseman Cole Freeman sent what looked like a routine ball to right field, but it dropped down for a two run single.

In the top of the eighth inning with two outs, Auburn left fielder Sam Gillikin broke up Walker’s no-hit bid and the shutout as he laced a ball over the left field wall.

LSU tacked on a run in the bottom of the eighth inning. Jordan scored from third on Robertson’s groundout to third base after reaching earlier in the inning to make it 9-1 LSU.