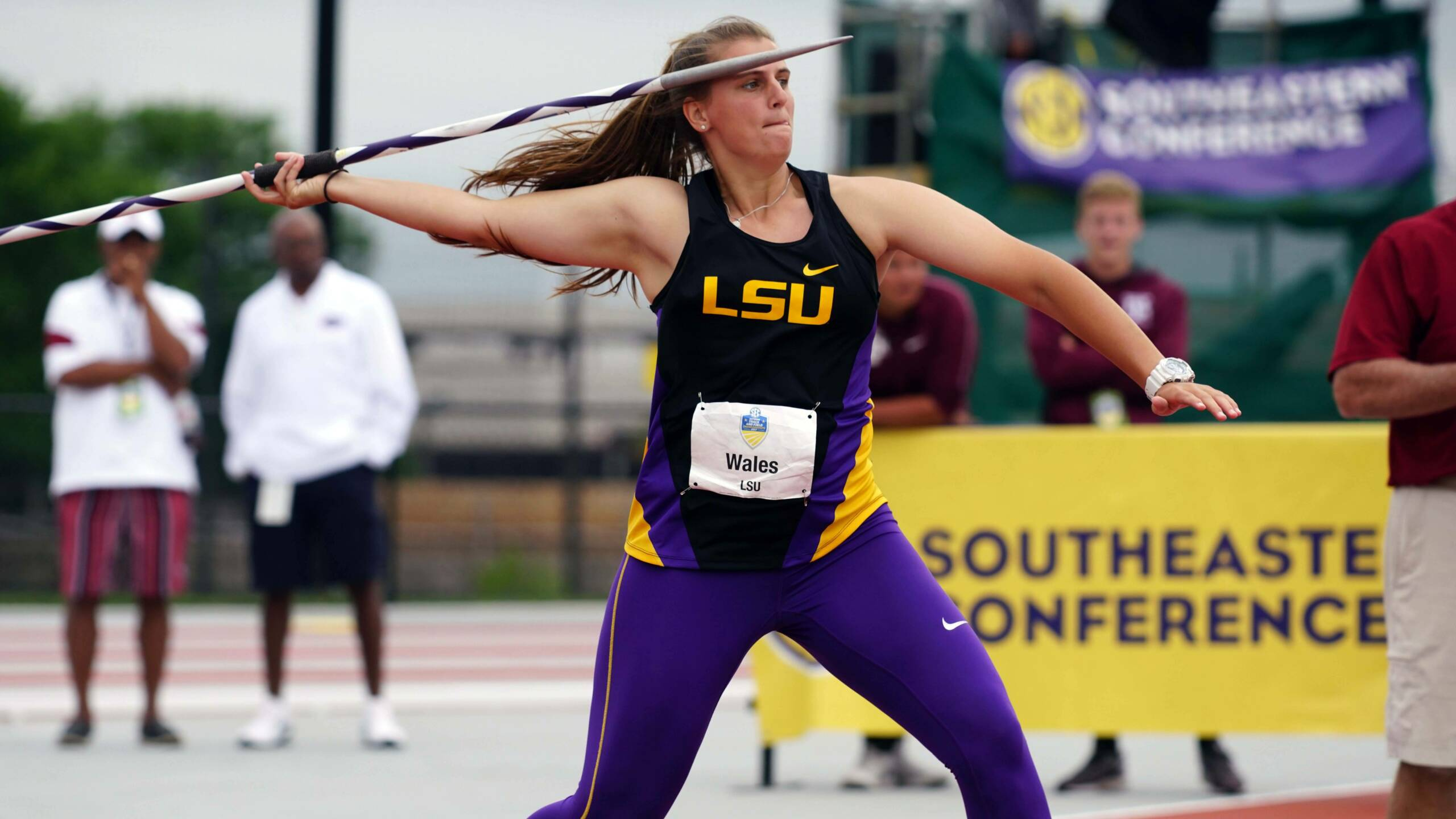 With four SEC event championships this weekend, LSU’s teams have won at least one title in 35 of the last 36 years at the SEC Outdoor Track & Field Championships dating back to the 1982 season.

Three wins propelled the No. 4-ranked Lady Tigers to a strong second-place team finish in the final women’s team standings with 100 points in three days of competition in Columbia. They improved upon their finish of fifth place with 75 points a year ago while earning their best finish at the SEC Outdoor Championships since finishing runner-up in 2013.

The Tigers wrapped up a seventh-place team finish on the men’s side with 57 points thanks to their title-winning 4×100-meter relay team and two other All-SEC performances by senior Nethaneel Mitchell-Blake.

Arkansas captured the women’s team championship for the third-straight season as the Razorbacks scored 128 points to outlast LSU for the win. Kentucky followed well back in third place with 81 points, while Georgia placed fourth place with 77 points, Florida finished fifth place with 76 points and Texas A&M rounded out the top half of the table in sixth place with 72 points.

Texas A&M dethroned Arkansas on the men’s side with a winning total of 119 points as the Razorbacks gave up their crown with 106 points for second place. Rounding out the Top 5 in the final men’s standings was the Alabama Crimson Tide in third with 103 points, Florida in fourth with 81.5 points and Georgia in fifth with 75 points.

Wales made history in Saturday’s finale at Cregger Track by becoming LSU’s first ever two-time SEC javelin champion after also claiming the title for the first time during her sophomore season in 2015.

After taking the early lead with an opening throw of 181 feet, 4 inches in the first round, Wales dropped to second place in the second round when Florida’s Marija Vucenovic threw her best on the day at 183-6 and fell to third place in the third round when Texas A&M’s Madalaine Stulce posted her best mark of the competition at 181-5.

Wales slipped another spot into fourth place in the fourth round as Texas A&M’s Audrey Malone moved into second place with a best of 181-6. But LSU’s former NCAA leader asserted her dominance in the fifth round when she let fly a three-foot personal best of 191-0 to overtake Vucenovic and clinch the title. The Gator senior was unable to strike back in the final round of throws as she logged a foul on her last attempt.

The West Monroe native threw exactly 14 feet farther than her winning mark of 177-0 at the 2015 SEC Outdoor meet to clinch her third-straight All-SEC finish in the event. Wales opened her collegiate career by earning fourth place in her SEC Championship debut in 2014 and highlighted her junior season in 2016 as the SEC Outdoor Bronze Medalist in the javelin.

Wales arrived in Columbia as the NCAA leader in the event with a previous PR of 188-0, but was overtaken Friday by Virginia Tech’s Irena Sediva who threw 192-6 on the opening day of the ACC Championships.

“Oh yeah, it was worth it. I’ll do my master’s (degree), so maybe I can make that graduation,” Wales said of missing her college graduation on Friday to compete at the SEC Championship. “I felt like I was going to throw big today. I knew that one was coming, I just didn’t know which throw it would be. I’ve always dreamed of throwing that far, but you never know in reality when it might happen.”

The Tigers and Lady Tigers followed Wales’ victory in the women’s javelin with a sweep of SEC titles in the 4×100-meter relay as both teams defended their conference crown from a season ago.

Despite temperatures dipping into the low 60s and rain falling on the field at Cregger Track, the Tigers were the only team in the men’s final to break 39 seconds with their second-fastest time of the spring as freshman Donte Jackson, Mitchell-Blake, senior Tinashe Mutanga and sophomore Jaron Flournoy teamed to run a title-defending time of 38.71.

That second leg was just a warm up for Mitchell-Blake, who later became just the second LSU Tiger in history to run sub-10 seconds in the 100-meter dash with a personal best of 9.99 (+0.6) for second place in the final. The British international nearly caught Tennessee’s NCAA leader Christian Coleman (9.97) from behind to defend the SEC title he won in 2016. LSU freshman Donte Jackson was eighth in the race in 10.49.

Mitchell-Blake joined three-time Olympic medalist Richard Thompson of Trinidad & Tobago as LSU’s only sub-10-second 100-meter sprinters as Thompson tied the collegiate record of 9.89 as a senior in 2008.

“When you go sub-10 (seconds) and you come second, it’s like, ‘Are you happy, or are you sad?’” Mitchell-Blake said of going under 10 seconds in the 100 meters for the first time. “It’s a quality field. Credit to Christian Coleman whose been pushing me all year. The SEC is the best conference in America with world-class athletes who really put on a show for the people. It’s fun, I have a lot of fun out here.

“The most important thing really is coming out of it healthy. I hate losing more than I enjoy winning, you know, but overall I love competing. Competing against the best is what I look forward to doing.”

Mitchell-Blake also arrived in South Carolina as the defending SEC Outdoor Champion in the 200 meters after running his personal best of 19.95 in the conference final last spring. He was again pipped for the title at the finish line by Coleman as the Volunteer standout clocked 19.98 (+0.6) to take the 2017 title. Mitchell-Blake turned in a seasonal best of 20.09 for the No. 2-ranked time in the NCAA this spring.

Alabama’s Jereem Richards rounded out the medalists in the men’s 200 meters with a time of 20.22 for the bronze. Georgia’s Kendal Williams was three tenths of a second off the pace in fourth place at 20.30.

While the men set the SEC meet record in their win at the University of Alabama a year ago, the Lady Tigers established the women’s mark in Saturday’s relay as the collegiate-record-tying team of junior Mikiah Brisco, sophomore Kortnei Johnson, senior Jada Martin and Hobbs braved the conditions to beat the field by nearly eighth tenths of a second with a winning time of their own at 42.56.

The Lady Tigers edged Texas A&M’s championship record of 42.61 from two seasons ago while beating the Aggies (43.31) to the finish line Friday in what proved to be a replay of the SEC Relays two weeks ago. The LSU women have now been crowned the SEC Champions in the 4×100-meter relay 20 times in the last 33 seasons since scoring their first title in 1985.

Each member of the Lady Tigers’ winning sprint relay came back to earn All-SEC honors in their individual events led by Hobbs’ SEC-title-winning run of 11.12 (+0.9) in the women’s 100-meter dash.

Hobbs out-leaned Auburn’s Jonielle Smith (11.13) across the finish line for the win to complete her sweep of SEC titles in the 60 meters indoors and 100 meters outdoors this season. LSU totaled 21 points in the final of the women’s 100-meter dash as Johnson climbed the medal podium as the third-place finisher with a time of 11.23 and Brisco followed in fourth place with a time of 11.24.

A Lady Tiger has now been crowned the SEC’s 100-meter champion 18 times in history as Hobbs became the first since Bowerman Award winner Kimberlyn Duncan won back-to-back titles in 2012 and 2013.

“I didn’t feel too good, I was still trying to get my body back right (after the relay). I know I need to do that come time for Oregon,” Hobbs explained. “Just from the weather and the cold, it just wasn’t right. In Oregon, you never know what you’re going to get, so that’s something I’ll need to work through again. It’s good to have that experience today.

“In the race, I’ll say my first 50 (meters) wasn’t good. But I stayed relaxed and was able to finish and come up with the win. The whole time running, I knew it was time to move. Staying relaxed helped get me there.”

Brisco was the first to return to the track following the sprint relay final as she matched her prelim time from Friday with a wind-legal 13.12 (+1.0) on Saturday for third place in the 100-meter hurdles. Jasmine Camacho-Quinn of Kentucky defended her title in 12.81, while Kendall Williams of Georgia was second in 12.92. LSU freshman Tonea Marshall also scored a sixth-place finish with a time of 13.30.

After being crowned the SEC Indoor Champion in the women’s 200 meters earlier this season, Martin earned all-conference accolades again with a third-place finish in Saturday’s event final as she stopped the clock on 23.01 (+0.6) to win the bronze medal. Florida’s Kyra Jefferson (22.74) and Kentucky’s Destiny Carter (22.92) won gold and silver, respectively, while Johnson followed Martin in fourth place at 23.03.

Freshman Ruby Stauber has quickly emerged as one of the NCAA’s leading 800-meter runners just one year after signing as part of LSU’s heralded Class of 2016 out of Wayzata High School in Plymouth, Minnesota.

A three-time SEC Women’s Freshman of the Week with her performance in 2017, Stauber completed her sweep of SEC silver medals in the 800 meters when she ran 2 minutes, 3.95 seconds on Saturday for runner-up in the event to Texas A&M’s Jazmine Fray (2:02.00). Coincidentally, Stauber held off Vanderbilt’s Courtney Clayton (2:04.12) down the stretch to add the title of SEC Outdoor Silver Medalist to the indoor silver she took home from the Vanderbilt Multipurpose Facility back in March.

LSU lined up two 800-meter finalists on the day as senior Blair Henderson earned a fifth-place finish on the men’s side with a time of 1:48.04 in his race. Henderson added to what has already been an impressive senior season in which he earned his first career All-SEC and All-American honors in the 800 meters during the indoor campaign.

Both of LSU’s 4×400-meter relays went out with fourth-place finishes as the Tigers nearly set a seasonal best with a run of 3:02.84 and the Lady Tigers followed with a time of 3:31.08 in the final race of the day.