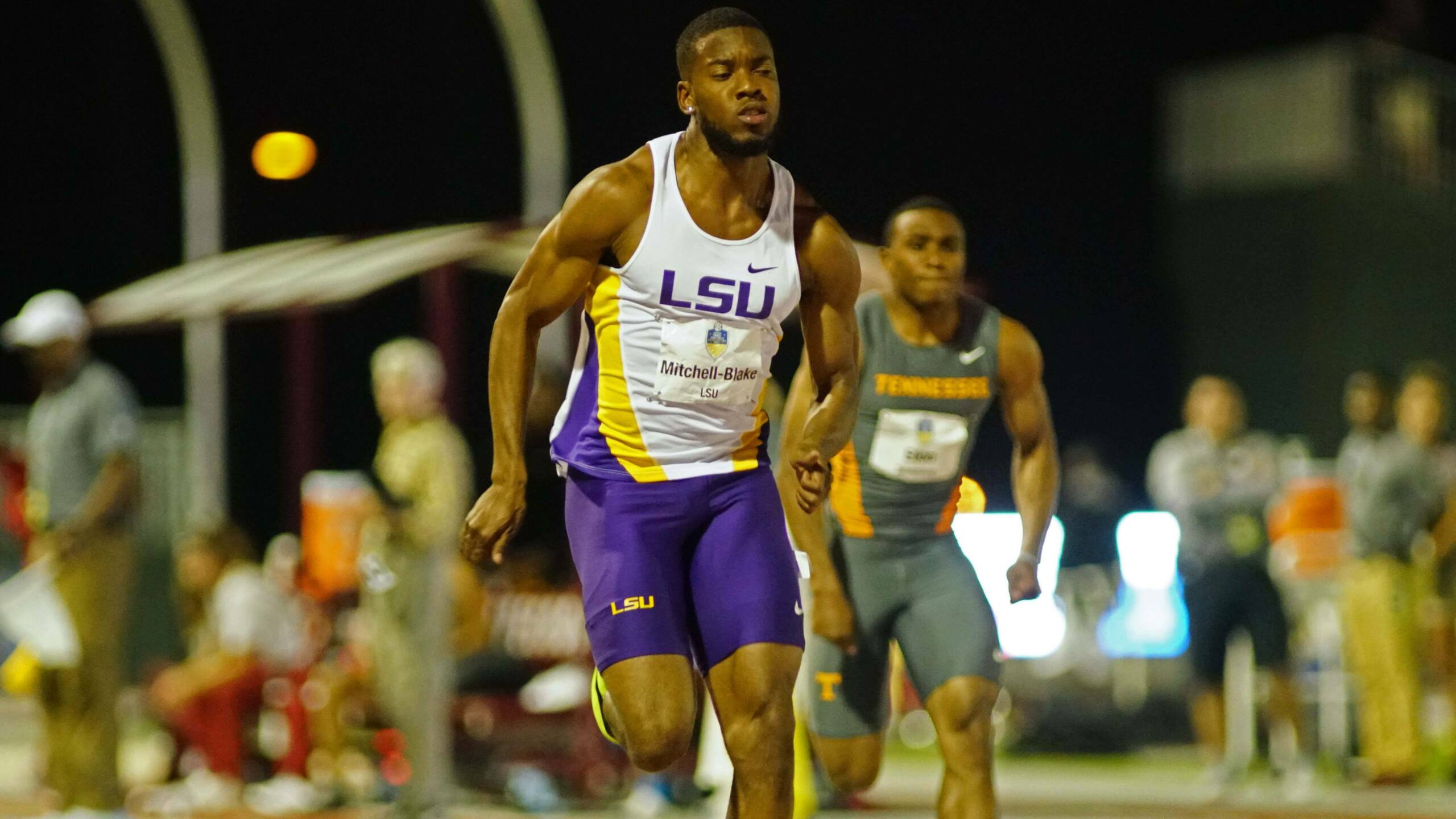 COLUMBIA, S.C. – Senior Nethaneel Mitchell-Blake will have the chance to defend each of his three Southeastern Conference titles during Saturday’s finale at the 2017 SEC Outdoor Track & Field Championships after cruising into the men’s 100-meter final with a personal best of 10.07 seconds at Cregger Track on Friday.

It was the final piece in the puzzle for the 2016 SEC Commissioners Trophy winner after qualifying in the 200-meter dash on Thursday and LSU owning the NCAA’s leading time in the 4×100-meter relay.

Mitchell-Blake took his mark in the last of four preliminary heats and emerged as the second-fastest qualifier of the day as he jogged a wind-legal PR of 10.07 (+0.9) to finish two tenths of a second in front of Georgia’s Cejhae Greene (10.27) in the race. Tennessee’s NCAA leader Christian Coleman topped the charts with a time of 10.03 (+0.7) in the first heat.

Mitchell-Blake edged his previous best of 10.09 in the event from the 2016 season to move into the No. 3 spot on LSU’s all-time outdoor performance list in the men’s 100 meters. He trails only former NCAA Champion sprinters Richard Thompson (9.89) and Trindon Holliday (10.00) in the school-record books at the distance.

Redshirt freshman Donte Jackson also advanced to the men’s 100-meter final in his debut appearance at the SEC Outdoor Championships after finishing runner-up to Coleman in the first heat with a time of 10.23.

“We’re going for a triple,” Mitchell-Blake said when asked about going for another double. “I feel good. I just have to take it one race at a time.”

Five LSU sprinters advanced in 100-meter qualifying on Friday as 2017 World leader Aleia Hobbs led the way on the women’s side with the quickest time of the night at 11.02 (+1.7) to win the first heat. Hobbs last ran a World-leading and NCAA-leading personal best of 10.85 in her last 100-meter race before the championship season at the SEC Relays on April 29.

Junior Mikiah Brisco later beat sophomore teammate Kortnei Johnson to the finish line in the fourth heat with a wind-legal 11.17 (+1.6) for the third-fastest time in qualifying. Johnson advanced on time with her run of 11.24 to qualify fifth overall for her second-straight SEC final in the event.

Brisco and freshman Tonea Marshall opened Friday’s qualifying events on the track by advancing in the women’s 100-meter hurdles as Brisco won the second heat with a wind-legal 13.12 (+1.9) and Marshall took third in the third heat with a seasonal-best time of 13.20 (+0.3). Brisco, the fourth-place finisher in the event a year ago, qualified third overall followed by Marshall in the fifth spot.

Seniors Michael Cherry and Travia Jones both qualified automatically as heat winners in the 400 meters as Cherry led a 1-2 finish for the Tigers in the second heat of the men’s prelims and Jones crossed first in the third heat of the women’s prelims. Cherry’s 45.93 was the fifth-fastest among heat winners as he was followed by senior LaMar Bruton in second place in the race with a time of 46.38 for 11th place overall. Jones ran 52.95 to advance to her first career SEC Outdoor final as the fifth-best heat winner on the night.

Sophomore Rachel Misher, who qualified for the women’s 400-meter final in her SEC Outdoor debut as a freshman in 2016, qualified again on time with a run of 53.25 for the third place in the first heat.

After putting nine points on the board in Thursday’s opener, the Tigers added five more points in Friday’s field events between senior Johnnie Jackson in the discus and freshman Rayvon Grey in the long jump.

Grey was the first Tiger to compete Friday as he took an early lead in the long jump with a seasonal-best mark of 25 feet, 4 ½ inches (+1.3) on his very first attempt in the qualifying round. He sat fifth overall heading to the final after posting a mark of 25-3 ½ (+1.8) on his second jump and passing his third jump. Grey’s sixth-place finish in the end earned the Tigers three more points in their first final of the day.

Missouri freshman Ja’Mari Ward saved his best for last with a winning jump of 26-8 ¼ in the sixth round to overtake Florida teammates KeAndre Bates (26-4 ¼) and Grant Holloway (26-1 ¾) for the title. Arkansas rookie Harrison Schrage followed in fourth with a windy 25-11 ½, while Texas A&M’s Will Williams edged Grey for fifth with a mark of 25-9 ¼.

Grey (25-4 ½) eclipsed his previous all-conditions seasonal best of 25-0w with a top-30 mark nationally while improving upon his eighth-place conference finish from the SEC Indoor Championships.

Like Grey, Jackson wasted no time in getting off the mark as he opened the men’s discus with a nearly three-foot personal best of 183-10 to take the early lead in the competition. Jackson, who scored the SEC silver in the hammer throw on Thursday, moved into a tie for the No. 8 spot on LSU’s all-time outdoor performance list in the discus with his personal best of 183-10 from the first round.

Jackson took fourth place into the finals and settled into seventh place in the final standings for two points in the event and 10 points for the weekend. Ole Miss’ NCAA leader Brian Williams was the class of the field as he raised his national-leading mark to 213-8 to finish more than 18 feet clear in first place.

Friday’s finale saw senior Christian Johnson finish among the scorers at the SEC Championships for the first time in his collegiate career as he completed the 3,000-meter steeplechase with a personal best of 9 minutes, 7.66 seconds to finish eighth in the race and score one point for the team. Ole Miss’ MJ Erb was crowned the men’s steeplechase champion with a winning time of 8:48.07.

Johnson scored at the SEC Outdoor Championships for the first time on the same day he was confirmed as a college graduate with his degree in biology as commencement exercises also took place back home in Baton Rouge.

Lady Tigers On The Board

Sophomore Brittany Kelly put the fourth-ranked Lady Tigers on the scoreboard at this year’s SEC Championships when she totaled 5,438 points for seventh place in the women’s heptathlon competition.

By scoring 5,438 points through the seven events, Kelly became the No. 8-ranked heptathlete in school history while earning her best career finish of seventh place at the SEC Outdoor Championships. She eclipsed her eighth-place finish in 2015 when she scored her personal best of 5,531 points as a freshman at Ole Miss.

LSU’s women scored their first six points of the meet during Friday’s action as freshman Nickolette Dunbar later tallied four points with a fifth-place finish in the women’s shot put as she threw a series-best of 52-8 ¼ in the third round of qualifying. Dunbar scored for the Lady Tigers at the SEC Championships for the second time this season after also finishing seventh indoors.

A throw of 55-6 ¼ in the final round won Florida’s Lloydricia Cameron the women’s shot put title as Alabama’s Haley Teel (54-6 ½) and Ole Miss’ Janeah Stewart (54-2 ½) rounded out the medalists in the event.

The 2017 SEC Outdoor Track & Field Championships will come to a close Saturday as events at Cregger Track begin at 10 a.m. CT in the field events and 2:15 p.m. on the track. Prime Time Timing will post live results from the meet as fans can follow the Tigers and Lady Tigers in action on the final day of the competition at http://www.pttiming.com.

The SEC Network+ is scheduled to broadcast Saturday’s events from 2:10-6 p.m. CT as fans can follow along at ESPN3.com. A two-hour tape-delayed broadcast of the championship is also scheduled to air on ESPNU on Wednesday night from 7-9 p.m.