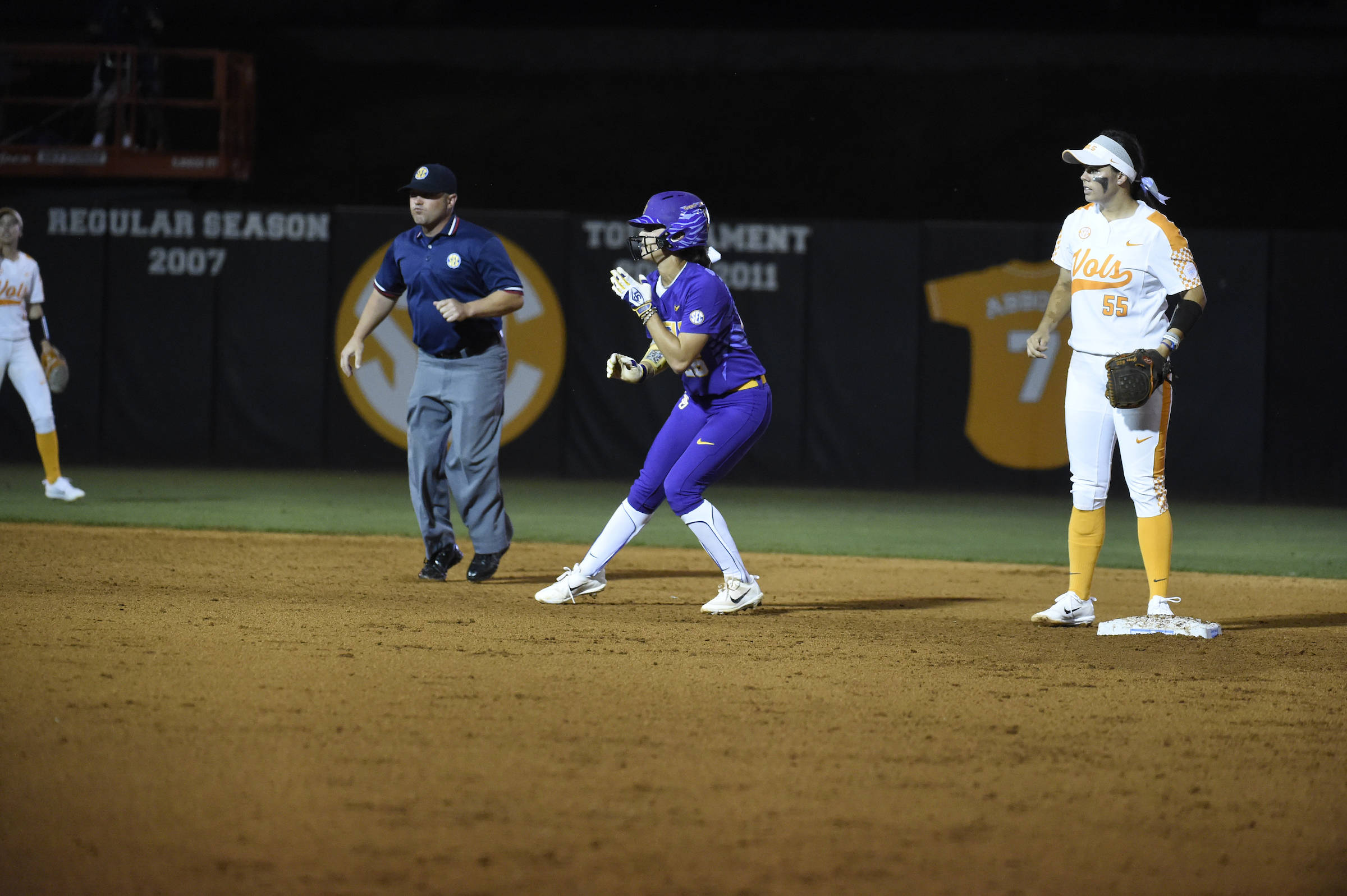 KNOXVILLE, Tenn. – After the No. 7 Tennessee Volunteers scored two runs in the first three innings, the No. 21 LSU softball team roared back to score six unanswered runs over the course of two innings to storm back and upset the 2017 SEC Softball Tournament host Vols 6-2 Thursday night in Knoxville.

As the host of the 2015 version of the conference tournament, the Tigers (40-17) were knocked out of the event in the first round by the very team they returned the favor to in the Volunteers (44-10) on Thursday, producing six runs on nine hits and taking advantage of two UT errors to advance to the semifinals for the second consecutive year.

The Tigers were led offensively by Bailey Landry who finished the game 3-for-4 with two doubles, tying the school record for doubles in an SEC tournament game, while Aliyah Andrews was 2-for-3 with a run scored. In all, six different LSU players produced hits, as Sahvanna Jaquish, Landry, Shemiah Sanchez and Sydney Springfield each drove in runs on the day.

Coming off of earning the save on Wednesday against Missouri, starter Allie Walljasper (15-4) earned the complete-game victory as she weathered the small-ball Tennessee attack early to hold the Vols to those two runs, one earned, on five hits with three strikeouts. Walljasper buckled down, holding Tennessee to just one hit in the final four innings, retiring the side in order in three of the four.

Tennessee pitching stifled the LSU offense during the in-season series at Tiger Park in April, but on Wednesday it took two just to try and stop the Tigers from scoring as starter Matty Moss (19-8) suffered the loss, with Caylan Arnold coming in on relief but lasting just one inning. Moss finished the game allowing two runs on six hits with a walk and four strikeouts in six innings, while Arnold allowed four, three earned, on four hits with a strikeout in one inning.

After LSU scored two runs in the top of the fourth inning to tie the game, the team turned on the jets and scored four runs on four hits and an error to jut out to a 6-2 lead. Singles from Andrews, Jaquish, Landry and Sanchez were scattered throughout the inning, as the wheels fell off for the Tennessee defense to the tune of the error, a passed ball and a wild pitch that kept the inning going.

LSU advances to the semifinal of the 2017 SEC Softball Tournament on Friday, where the Tigers will have its third rematch when the team takes on Auburn at 4:30 p.m. CT. The game will be televised on ESPNU with Beth Mowins, Michelle Smith and Amanda Scarborough on the call.