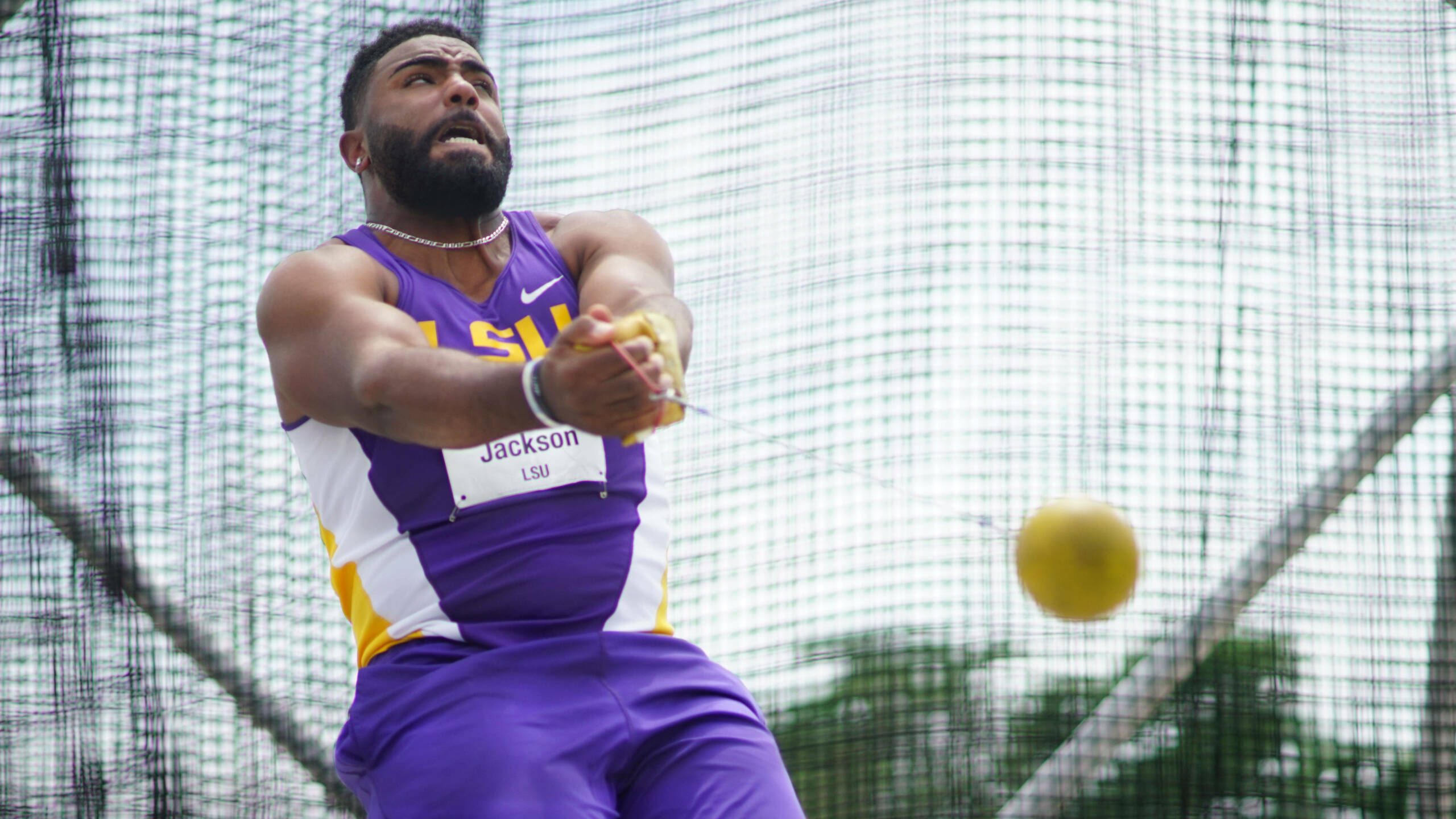 COLUMBIA, S.C. – The LSU Tigers are on the scoreboard at the 2017 Southeastern Conference Outdoor Track & Field Championships thanks to a silver-medal-winning second-place finish in the men’s hammer throw by senior Johnnie Jackson in the first event final of Thursday’s opener at Sheila & Morris Cregger Track.

Already the SEC Indoor Silver Medalist in the weight throw in 2017, Jackson enjoyed his second All-SEC performance this season with a best of 229 feet, 10 inches for second place in the hammer competition.

Jackson held the lead through three rounds of qualifying with marks of 223-11 on his first attempt, 225-8 on his second attempt and 227-11 on his third attempt. He slipped into second place in the finals when Georgia’s Denzel Comenentia moved from fifth to first with a throw of 234-3 in the fifth round. Georgia’s Alex Poursanidis then overtook Jackson for second place with his best of 229-0 in the sixth round.

But Jackson struck back two throwers later to snatch the silver medal from Poursanidis with a series-best of 229-10 on his sixth and final attempt of the competition to put the Tigers on the board with eight points.

Alabama’s Elias Hakansson wrapped up the day just off the medal podium in fourth place with a throw of 227-4, while Ole Miss’ Dempsey McGuigan (223-0) followed in fifth, South Carolina’s Clarence Gallop (215-7) sat in sixth, Tennessee’s Seth Whitener (214-11) trailed in seventh and Florida’s AJ McFarland (214-2) rounded out the scorers in eighth in the event.

“I was just glad that I opened up well,” Jackson said of his qualifying performance. “Starting the fifth round, that’s when people really started to pick up, and that’s when I started to pick up from sitting around after the warm-ups going into the finals. When I got bumped down I was still trying to push for it. In the final round, I kind of just went in there and really tried to go for it.

“I’m glad to be over 70 meters again. It’s been about a month since I’ve been over 70 meters, so I’m glad to be back over that and keep pushing going into regionals. I had maybe my best series that I have had this year here today. Hopefully that carries on to the other meets we have over the next few weeks.”

Jackson, who was also crowned the NCAA Indoor Champion in the weight throw back in March, picked up LSU’s first SEC medal in the men’s hammer throw since Michael Lauro bagged the bronze in 2012.

“I didn’t throw the hammer at all until after (indoor) nationals. That’s really when we picked up the hammer for the first time,” Jackson explained. “Since the weight was going that well from the start of the season, we thought we’d just focus on the weight because something great could happen. So we waited until we got outdoors to even pick up the hammer and try to hammer that home.”

Braxton On The Board

The Tigers totaled nine points on the opening day of the championship as sophomore Dajour Braxton added one point in their final event of the night with an eighth-place finish in the men’s 10,000-meter run.

Running with the lead pack for much of the race, Braxton outraced Alabama’s Connor Thompson for the final scoring position as he crossed the finish line in 31 minutes, 9.72 seconds for eighth place. Thompson posted a time of 31:10.30 for ninth place. Crimson Tide teammates Alfred Chelanga (30:25.24) and Antibahs Kosgei (30:25.27) ran side-by-side for a 1-2 finish in the event.

It marked the second time in three seasons in which the Tigers featured the eighth-place finisher in the men’s 10k at the SEC Championships after former LSU runner Travis Pope was the final scorer in the 2015 final.

Kortnei Johnson made the most of her SEC Championships debut a year ago when she earned All-SEC honors as the SEC Outdoor Silver Medalist in the 100-meter dash and finished fourth in the final of the 200 meters. Johnson actually ran her wind-legal personal best of 22.78 in last year’s 200-meter final at the conference meet.

She closed out 200-meter qualifying on Friday with the fastest all-conditions 200 meters of her career with a winning 22.50 (+2.4) to return to the final with the second-fastest time in the prelim field. Running out of the far outside lane in Lane 9, Johnson controlled the race from the start with a strong turn as she crossed the finish line well in front of Texas A&M’s Diamond Spaulding (22.77w) in second place.

Only Florida’s Kyra Jefferson, the 2015 SEC Outdoor Champion, was faster than Johnson on the day as the Florida standout posted the top qualifying time with a wind-legal 22.43 from the first heat.

“That’s really the main thing I’ve been working on at practice, just getting out, keeping that speed and just letting that speed carry me out of the turn. I feel like I did a good job. I know I ran it well, but in the final I have to step up my game,” Johnson said. “Yesterday at practice, I actually practiced in Lane 3 and Lane 9. I was hoping to have a better lane, but I practiced it so I felt good in that lane.

“Just executing the race and not worrying so much about time was the key for me today. Sometimes I focus too much on what time I’m running, but I know if I execute the race, the time will come by itself.”

Johnson will be joined in the women’s 200-meter final by senior teammate Jada Martin, who qualified seventh overall with a windy 22.84 (+2.8) as the second-place finisher in the fourth heat. Martin captured the SEC Indoor Championship in the event earlier this season. LSU freshman Cassondra Hall added a wind-legal PR of 23.17 (+1.1) as she placed second in the second heat and 15th overall in the qualifying round.

Tiger senior Nethaneel Mitchell-Blake lined up in Friday’s prelims as the defending SEC Outdoor Champion in the men’s 200-meter dash and earned the right to defend his title on Saturday with a heat-winning 20.19 as the third-fastest qualifier of the day. Mitchell-Blake looks to defend his SEC crown against the likes of Alabama’s Jereem Richards (19.98w) and Tennessee’s Christian Coleman (20.19w).

In 800-meter qualifying, Lady Tiger rookie Ruby Stauber was the easy winner in the second heat of the women’s prelims as she stopped the clock in 2 minutes, 5.81 seconds for the third-fastest time among all the heat winners in the event. Sophomores Hollie Parker (2:07.40) and Erika Lewis (2:08.41) clocked personal bests as they finished just outside of the qualifying places in 10th place and 12th place, respectively.

Senior Blair Henderson, and 800-meter All-American during the indoor season, earned a lane in the SEC Outdoor final for the second-straight season with the third-fastest time in men’s qualifying at 1:48.41.

The Lady Tigers closed out Friday’s qualifying action on the track a perfect 3-for-3 in the women’s 400-meter hurdles as seniors Ka’Lynn Jupiter and Bryiana Richardson and junior Kymber Payne all advanced to the final. Payne won the first heat with the third-fastest time of the day at 57.14, while Jupiter (56.68) and Richardson (58.59) followed with a 2-3 finish in the second heat. Jupiter’s seasonal best of 56.68 was just off her PR time of 56.63 as the No. 2 time in qualifying, while Richardson grabbed the ninth and final spot in the final.

Sophomore Brittany Kelly was the first LSU athlete to compete in Thursday’s opener at the SEC Outdoor Championships as she ended the first day of the women’s heptathlon in a strong position with 3,334 points to sit in sixth place overall. That was her second-best Day 1 score of the season after she opened with 3,337 points at the Texas Relays in March.

Kelly, the eighth-place finisher in the heptathlon at the SEC Outdoor Championships during her freshman season at Ole Miss in 2015, will close out the event Friday with the long jump, javelin and 800 meters.

The 2017 SEC Outdoor Track & Field Championships continue Friday at 10:30 a.m. CT with the resumption of the women’s heptathlon followed by the first field-event finals of the day at 1:30 p.m. and first prelim events on the track at 5:30 p.m. Prime Time Timing will carry live results from the meet as fans can follow the Tigers and Lady Tigers in action at http://www.pttiming.com.

Friday’s action is also scheduled for live coverage through the SEC Network+ on ESPN3.com as fans can follow the events from 5:25-9 p.m. CT. Saturday’s events will stream live on the SEC Network+ from 2:10-6 p.m.