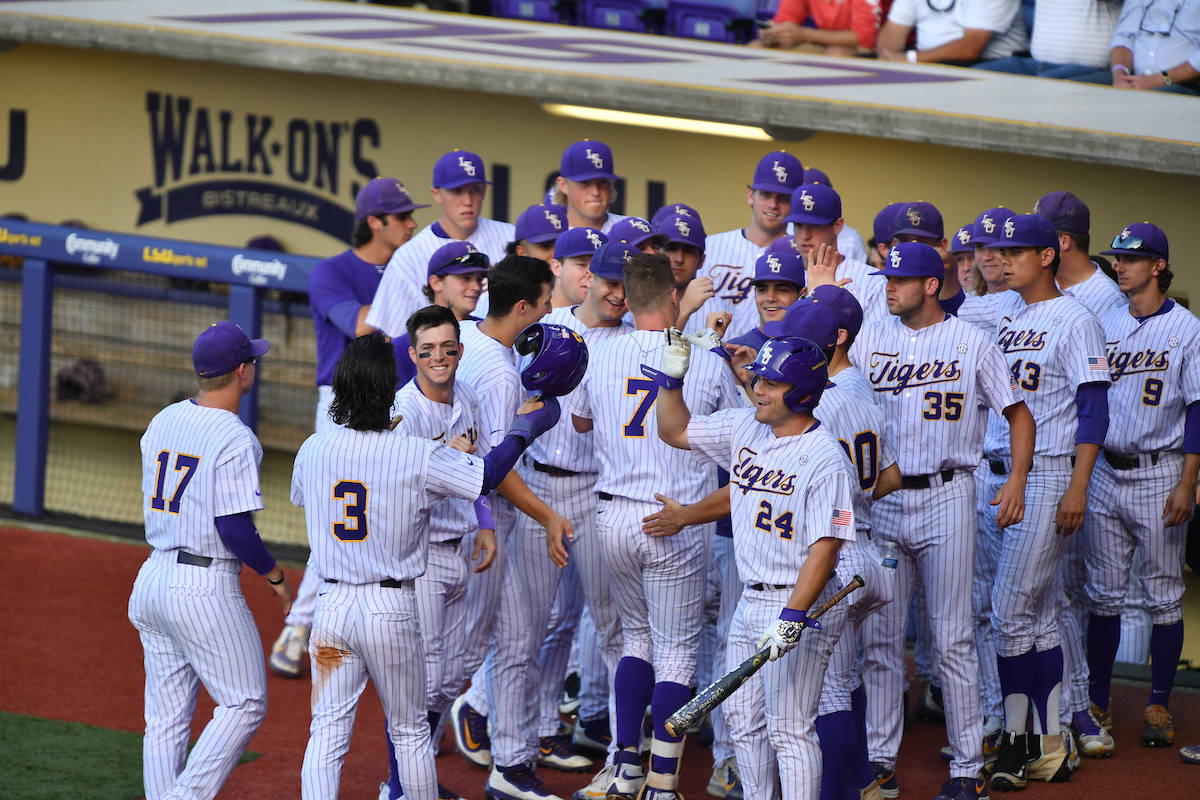 BATON ROUGE, La. – With one out in the top of the ninth inning, South Alabama pinch hitter Matt Bolger put a safety squeeze bunt down to drive in right fielder Brendan Donovan and knot the game, and the Jaguars would push another two runs across to defeat No. 10 LSU, 7-6, Tuesday evening at Alex Box Stadium, Skip Bertman Field.

Freshman Andy Arguelles limited the Tigers to four hits in 6.1 innings and struck out eight batters to earn the win for the Jaguars. The left-hander improved to 3-2 on the season.

Right-hander Matt Peacock earned his ninth save of the year after pitching the ninth inning and allowing one run on two hits, striking out one.

LSU southpaw Nick Bush (1-1) suffered the loss after allowing three runs on one hit and three walks in one inning of work.

“We were short-handed tonight, we had a couple of our regulars who were unavailable due to minor injuries, and I think that affected us tonight,” said LSU coach Paul Mainieri. “It’s not making excuses, but we had to hold them out to make sure they would be ready for the weekend series against Auburn. We also had to hold back guys like (relief pitchers) Zack  Hess and Hunter  Newman, because I wanted to make sure they are 100 percent for the Auburn series.

“We tried to get through it with the rest of the guys, and it looked like we were going to figure it out and get to the finish line. It’s a disappointing loss, but there were a lot of good things out there tonight and now we have to get ready for Auburn.”

Sophomore Caleb Gilbert started the game for the Tigers.  The right-hander fired two innings, allowed one run on three hits and struck out two.

Sophomore Sean Trimble tossed 1.2 innings, allowed five runs on four hits and walked one to open the game for the Jaguars.

The Tigers begin their final conference home series Thursday at 6:30 p.m. CT. The game will be televised on ESPN2. It will also be broadcast live 98.1 FM in Baton Rouge only. Fans can also go to LSUsports.net for live stats and audio.

“South Alabama has a good ball club,” Mainieri said, “and they lead the nation in bases on balls. We knew that, but we didn’t throw the ball over the plate consistently enough. South Alabama has a good team, and they’re in first place in the Sun Belt Conference for a reason. We were three outs away from putting the game away tonight, but we just couldn’t finish it off.”

South Alabama grabbed the 1-0 lead in the top of the first inning. Left fielder Dylan Hardy led off the inning with a single to left field and scored on centerfielder Travis Swaggerty’s single to right field.

Shortstop Kramer Robertson doubled to right-centerfield to begin the inning. With two outs and Robertson on third, junior Greg Deichmann went opposite field and belted his 16th home run of the year to give the Tigers the 2-1 lead.

LSU extended its lead to 5-1 in the bottom of the second. Third baseman Josh Smith and left fielder Beau Jordan put runners on base after reaching on a double and being hit by a pitch, respectively. The pair moved to scoring position on a fielder’s choice, and with one out, first baseman Jake Slaughter singled through the left side to score Smith.

With the bases loaded, second baseman Cole Freeman grounded into a fielder’s choice which scored designated hitter Rankin Woley from third. Centerfielder Antoine Duplantis followed with a single up the middle to drive in Slaughter.

The Jaguars added a run in the top of the fourth and cut into LSU’s lead to make it 5-2. With runners in scoring position and no outs, Swaggerty sent a sacrifice fly to centerfield to drive in designated hitter Colton Thomas, who reached earlier via walk.

In the top of the fifth with two outs and catcher Jared Barnes on second after a leadoff double, Thomas doubled to right-centerfield to cut into LSU’s 5-3 lead.

South Alabama pulled within one to make the score 5-4 after Swaggerty scored on a two out single by Barnes after walking to lead off the inning.

With the bases loaded and two outs in the top of the eighth inning, Jordan made a diving play in foul territory in left field to escape the jam, and LSU held onto the 5-4 lead.

The Jaguars put runners on the corners with one out in the top of the ninth. Pinch hitter Matt Bolger put down the safety squeeze to score right fielder Brendan Donovan and tie the game at 5-5. With the bases loaded after an intentional walk, Barnes flied out to centerfield, but Swaggerty tagged from third as South Alabama grabbed the 6-5 lead.

Third baseman Will Luft pushed the final run across for South Alabama with a single, which scored Bolger from third.

The Tigers put a rally together in the bottom of the ninth, but it was not enough. With two outs, Robertson singled up the middle, moved to second on a balk and scored on Freeman’s single to the left side. Freeman advanced to second on a throwing error by the left fielder, but Duplantis popped up to the shortstop for the third out to end the game.