Duplantis Walks Off to Capture Series Over SC 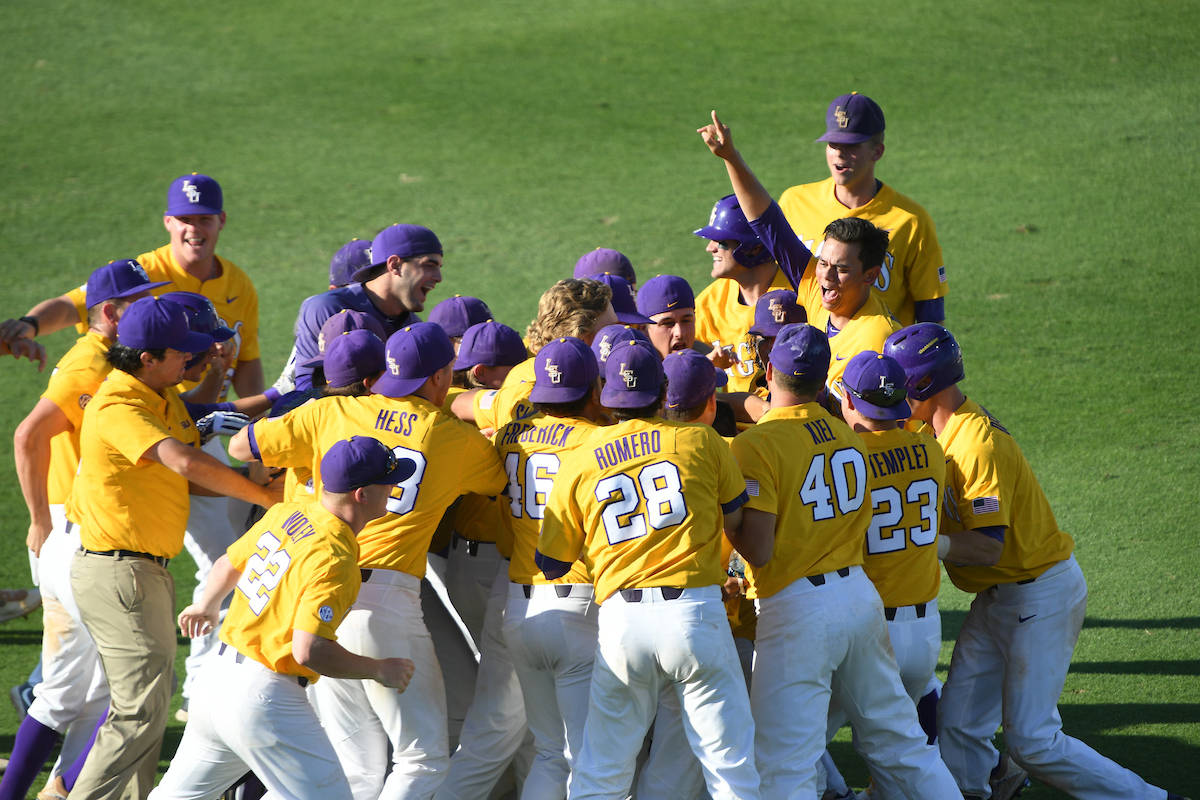 With runners on the corners and one out, Duplantis dropped his fifth hit of the contest into shallow left field for the game winner and a series victory over the Gamecocks. The win pushed LSU to 32-16 and 15-9 in the SEC. South Carolina dropped to 27-19 and 11-13 in league games.

LSU is one game behind first-place Florida and Mississippi State (both 16-8 in the SEC) in the overall league standings.

The victory was LSU’s first walk-off win since the Tigers defeated Tennessee in the first round of the 2016 SEC Tournament in Hoover, Ala.

Zack Hess (5-1) earned the victory with a strong 1.1 innings of relief. Hess entered the game in relief in the top of the ninth inning after South Carolina had taken a 6-5 lead and stranded the bases loaded to limit the damage.

Tyler Johnson (0-2) suffered the loss for the visitors after allowing two runs on four hits in 1.1 innings.

LSU returns to action for midweek contest at 6:30 p.m. Tuesday against South Alabama at The Box. The game will be streamed live on the SECNetwork+ through WatchESPN.com and the app. Fans can also listen to the game on the LSU Sports Radio Network, including 98.1 in Baton Rouge.

“I thought our kids really swung the bats well all day,” said LSU coach Paul Mainieri. “We were confident and aggressive at the plate, but we didn’t have enough to show for it, because we hit so many balls hard right at people. Each time South Carolina took the lead, our kids hung in there and kept battling, and we made some things happen.

“We had some tremendous relief pitching and amazing plays on defense that all contributed to the win.”

The Gamecocks opened up the first inning with back-to-back singles off of LSU starter Eric Walker. With one out, USC plated its first run on an RBI groundout by Jonah Bride.

LSU added two in the bottom of the second to take a 2-1 lead. With runners on first and second, catcher Michael Papierski hit a one-out single through the right side to score second baseman Josh Smith. Watson followed with an RBI fielder’s choice to score designated hitter Beau Jordan from third.

The Tigers added another run in the top of the fourth inning when Jordan scored on a wild pitch by Scott with two outs.

USC picked up a four-run fifth inning to regain the lead and make it a 5-3 game. With centerfielder TJ Hopkins on, second baseman LT Tolbert hit an RBI single to left field. Designated hitter Alex Destino followed later in the inning with a two-out, three-run home run to right field.

LSU chipped away at the Gamecock lead in the fourth and fifth innings to get it within one. In the fourth, after reaching third on a double and ground out, Beau Jordan scored on a wild pitch by USC starter Reed Scott. In the next inning, left fielder Greg Deichmann singled through the right side to score shortstop Kramer Robertson.

The home team evened the game at 5-5 in the bottom of the eighth inning. With runners on the corners and two outs, Watson singled on a sharp ball to the shortstop. The first baseman came off the bag on the throw, and Smith was able to score.

The Gamecocks took the lead in the top of the ninth inning to go up 6-5. Right fielder Jacob Olson scored on a sacrifice fly by Tolbert. LSU bounced back in the bottom half of the inning on a single to left-center field by Deichmann, his second RBI of the game.

LSU was able to hold USC off the board in the top of the 10th inning. With first baseman Matt Williams on first, Olson doubled to left field. Williams was thrown out on a precise relay by Robertson for the 7-6-2 putout.

“South Carolina has an outstanding team with some real quality arms, and this was a hard-earned series victory,” Mainieri said. “Don’t count the LSU Tigers out, because we’re hanging in there. We’re fighting right to the end, we’re trying to make our fans proud of us, and we’ve got six big ball games left in this league over the final two weeks of the regular season.”