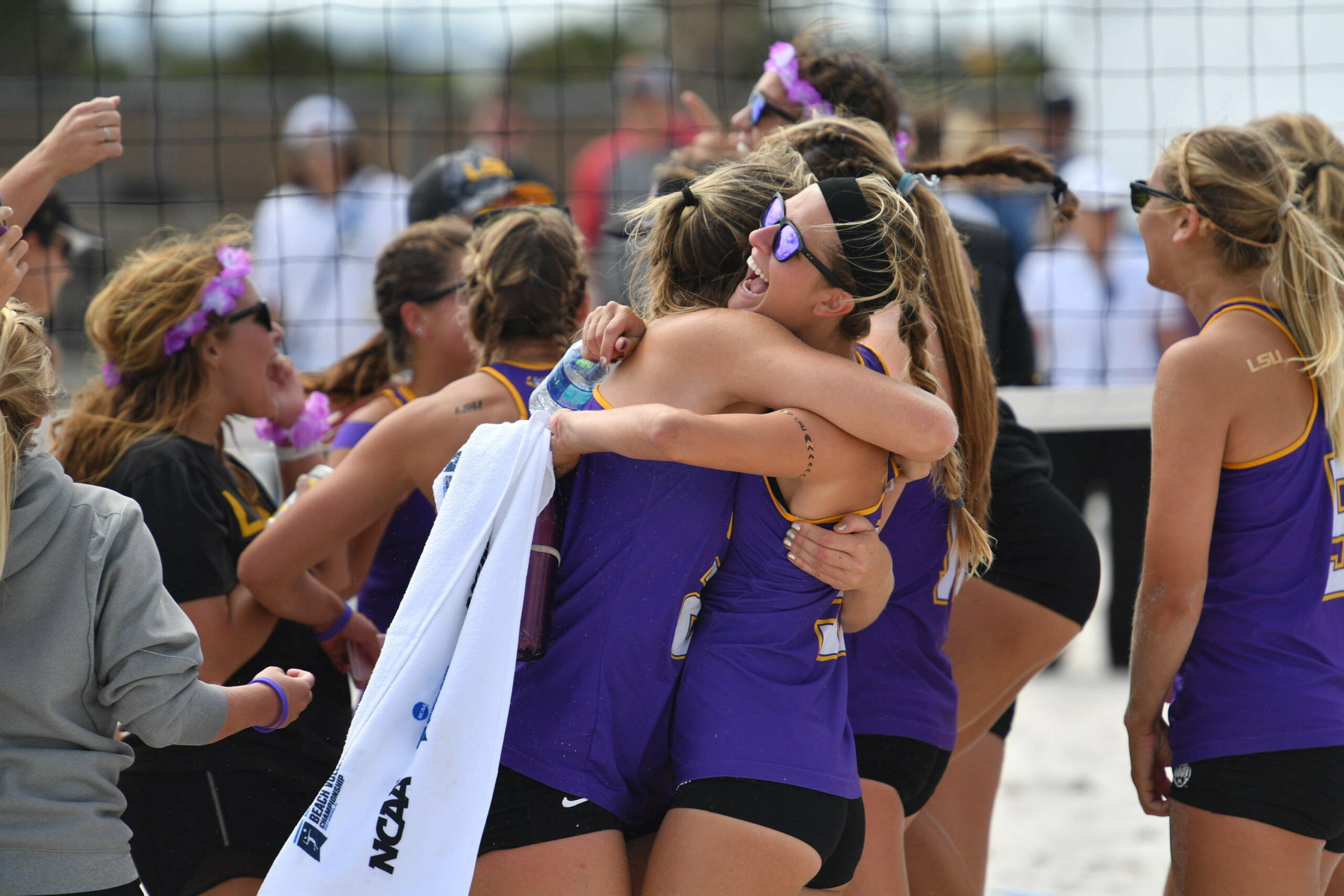 GULF SHORES, Ala. – In of the most tightly-contested matches of the season, the No. 7 seed LSU beach volleyball team earned the program’s first-ever win at the NCAA Championships in comeback fashion, rallying down 2-1 to defeat No. 6 seed Long Beach State by a score of 3-2 on Friday at the Gulf Shores Public Beaches.

With the win, LSU joined Florida State as one of just two teams from the East region to win a match at the Championships in the two-year history of the tournament.

Overall, LSU split its matches on the day after falling to UCLA, 3-0, in the first match. The Tigers will return to action tomorrow at 2:10 p.m. CT to take on No. 5 seed Hawaii in a win or go home scenario. Tomorrow’s match will also be televised on truTV.

“This is really special. Even in this format with everyone playing at the same time, we looked at the board and saw that we were down in some matches. I told Claire (Coppola) and (Kristen (Nuss) ‘Hey, you guys are going to win and Katie (Lindelow) and Olivia (Powers) are going to come back and win,’” said head coach Russell Brock. “The ability for us to know where our strengths are in the matchups and for our pairs to be able to take advantage of it is just awesome.”

The Tigers got off to a slow start to open up the tournament in a rematch against the second overall seed UCLA.

After falling into the elimination bracket, the Tigers rebounded in a big way against Long Beach State to avoid elimination.

On courts one and three, both teams battled back and forth as both of the duals extended to three sets.

No. 1 pair Coppola and Nuss split the first two sets by scores of 21-17, 18-21 to head to a final set. With match point hanging in the balance down 14-13, the duo rattled off an impressive three-point swing to pick up one of the biggest points of the season for the Tigers, tying the match at two apiece.

“Claire and Kristen have been in this situation before and in much worse positions. They honestly believed they were going to pull it off. That’s a great combination to be super talented and to believe that you can beat anybody at any time regardless of the conditions,” added Brock.

After dropping the first set, 14-21, at the third flight, Powers and Lindelow battled back to force a third, taking the second set by a score of 21-19. In the deciding set, the tandem completed the comeback in a nail-biter, securing the match-clinching point for the Tigers in three sets by a final score of 14-21, 21-19, 17-15, lifting LSU to its first-ever victory at the NCAA Championships to advance to the next round.

“Katie and Olivia are so good, and at the beginning of the year, we never expected them to be here since they never played together in the fall. As the season progressed and we tried new things, that was one of the pairs that emerged. They have been pivotal and critical as we moved through the season, and they showed it once again today,” said Brock.