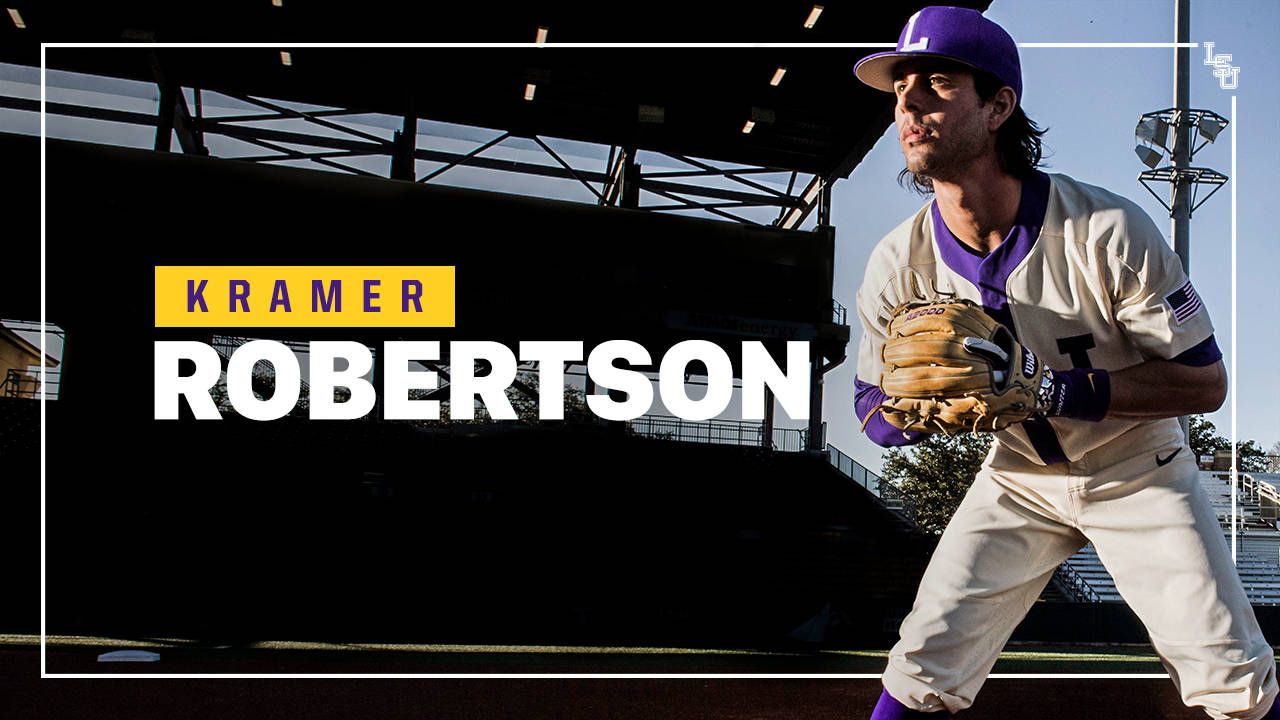 During big moments, the LSU shortstop relies on preparation to stay calm. Before the moment arrives, he repeatedly pictures getting the hit or making the play in his head. He sees his success.

“Baseball’s a game of failure,” Robertson explained, “but you’re not going to be successful if you don’t have a ton of confidence.”

Confidence is something that he has a lot of, and he’s not afraid to show it. He wears his emotion on his sleeve. His mom, Kim Mulkey, expressed that he’s been passionate his whole life in everything that he’s ever done.

Robertson believes that his competitive passion runs in his blood. Mulkey played basketball at Louisiana Tech and is now the head women’s basketball coach at Baylor. His dad, Randy, played quarterback in Ruston for the Bulldogs.

Growing up, Robertson followed his parents’ footsteps athletically. He played whatever sport was in season, and he excelled athletically at a young age.

“I tended to err on the side of maybe taking some things that he did at a young age for granted. Looking back at home videos now, you kind of go ‘Wow!’” Mulkey exclaimed.

He was a multi-sport star playing the big three through high school:  football, basketball and baseball. Robertson realized early on that he probably wouldn’t be big enough to play basketball or football at the collegiate level.

“I started to excel in baseball during middle school, and I knew that was going to be my ticket to college,” said Robertson.

And it was. Robertson, a senior now, committed to play baseball at LSU.

“I’ve never taken it for granted. Every time I see and put on that jersey with my name and number on the back, it still gives me goosebumps,” Robertson said.

He came in his freshman year and competed immediately for the starting position at second base for the 2014 season. LSU coach Paul Mainieri explained that Robertson wasn’t quite able to hold on to that starting job his freshman year, but he was still a valuable piece to the team throughout that season.

Unfortunately, during his sophomore year Robertson hurt his throwing elbow with about six weeks left to go in the season. That injury kept him from traveling to Omaha with his team that year, something that motivates him today.

“I’ve never been to Omaha. We went two years ago, but I was injured. That’s been a goal of mine since I was a little kid. I want to play in the College World Series and win a national championship,” he said.

The next season would be his breakout year. Ultimately, he would finish his 2016 campaign being named Second-Team All-American and First-Team All-SEC, along with multiple other distinctions. It was a relief to Mainieri, who was admittedly nervous about being able to replace shortstop Alex Bregman, who had been the second player selected in the 2015 MLB Draft.

“Kramer came back his junior year, and I was hoping that he would win the starting job at second base and be able to maintain that role throughout his junior year,” Mainieri explained. “I think we were about seven games into the season, and we made the switch to put him at shortstop and, basically, he saved our season.”

Starting all 66 of LSU’s games, Robertson led the 2016 LSU team in hitting during SEC play, batting .363. He enjoys having success at the plate, but he loves flashing the leather on defense.

Big moments find Kramer Robertson, and he flourishes in them. He dreams about being in those situations with the game on the line and hearing the roar of the Alex Box Stadium crowd.

“Those are the plays and at-bats that separate good players from great players. Anybody can be good when you’re up or down by a lot of runs,” expressed Robertson, “but what makes a player special is if he can rise up and take his game to the next level when the pressure is at its highest. That’s something I take a lot of pride in.”

“He plays his best when he is emotionally engaged with the game,” added Mainieri.

When talking with Mainieri, he articulated the final story for this 2017 season is yet to be written, but he feels in his heart that Robertson will finish very strong and will be a critical part to the team’s ultimate success.

His ferocity not to lose could carry LSU throughout the end of the season and deep into the postseason.

“It’s an obsession not to lose. Anything that I do that’s a competition, I’m pretty passionate about it,” voiced Robertson. “I love what I do and it comes out of me. I love winning and hate to lose so much.”