Football Spring Game to Kickoff at 7 p.m. on April 22 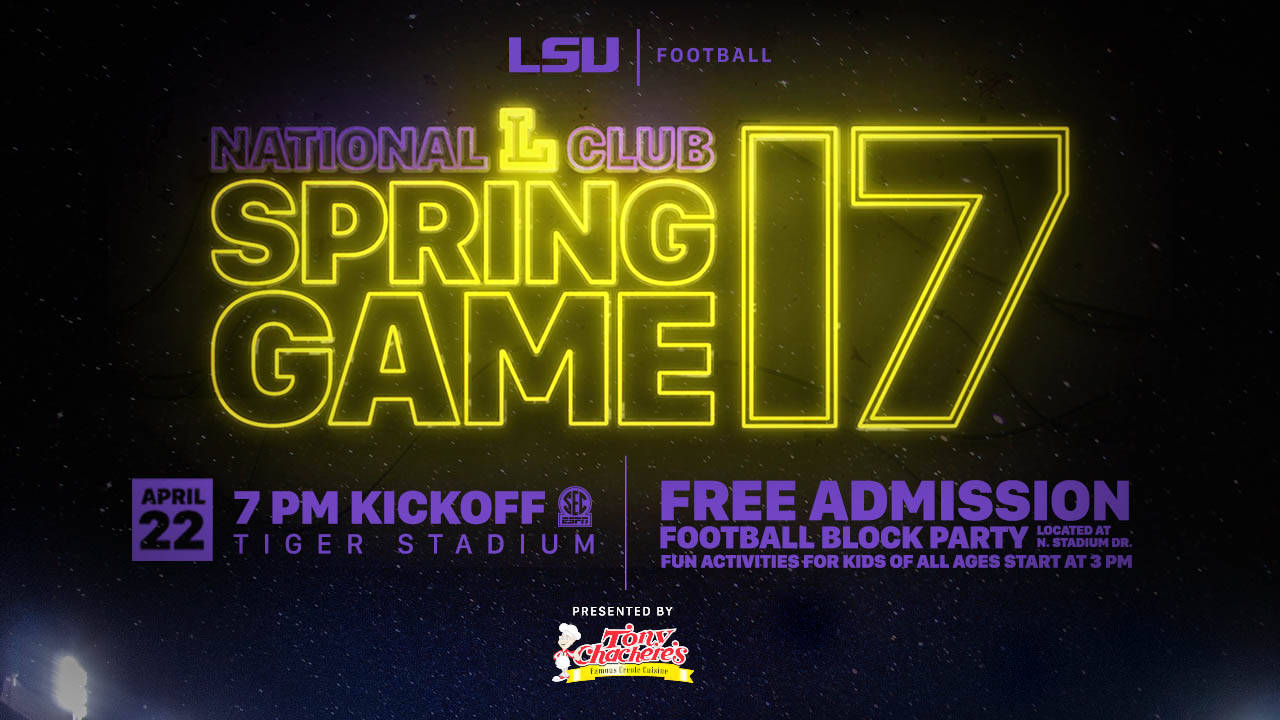 Details for events and activities that day on campus leading up to the spring game are still being planned, however kickoff for the contest is scheduled for 7 p.m. in Tiger Stadium. The game will be televised on the SEC Network.

LSU opens its first spring practice under Orgeron on Saturday, March 11. The Tigers practice a total of 15 times during the spring, culminating with the National L Club Spring Game on Saturday, April 22.

The last time LSU played a spring game at night came in 1998 when the Tigers had a 6:30 p.m. kickoff under coach Gerry DiNardo.

LSU wraps up spring practice on Saturday at 7 p.m. CT when the National L Club Spring Game presented by Tony Chachere’s is held in Tiger Stadium.

Admission is free of charge.

The game will be broadcast on the LSU Sports Radio Network and can be heard in the Baton Rouge area on 104.5 and 104.9 FM as well as on the internet at www.LSUsports.net/live. The game will televised on the SEC Network and streamed via WatchESPN.com.

Fans coming to campus for the game are reminded that LSU will host a “Rock ‘N Roar” Block Party on North Stadium Road between Tiger Stadium and the Maravich Center beginning at 3 p.m. The block party is free and will feature a live band – Cowboy Mouth – who will play from 3:30 to 5:30 p.m. as well as carnival activities for the kids, a dunking booth, inflatables and all types of food and drinks.

The LSU football team is scheduled to walk down “Victory Hill” at approximately 5:45 on Saturday afternoon on their way into Tiger Stadium.

Gates to Tiger Stadium open at 5 p.m. and fans are asked to enter the stadium on the west side thru gates 1-6 or gate 7 in the north endzone (Seating Chart). Gate 10 on the east side will serve as the handicapped entrance.

Due to the many construction projects currently taking place in Tiger Stadium, seating for the game will be located on the west side and north endzone.

LSU is currently updating and refurbishing 34 restrooms on the east, north and west sides of Tiger Stadium. Other projects currently taking place in Tiger Stadium include: the waterproofing of the east side, the dorm demolition on the south side of the stadium as well as updates to numerous concessions stands.

Here are some additional reminders when coming to campus on Saturday:

Fans are reminded about the LSU Clear Bag Policy – Geaux Clear, which will be in place for the spring game. Backpacks are not permitted in Tiger Stadium.

The following is a list of additional items not permitted in Tiger Stadium:

Fans should be reminded about the safety and security of themselves and those around them – “if you see something, say something”

Other Parking and Traffic Reminders