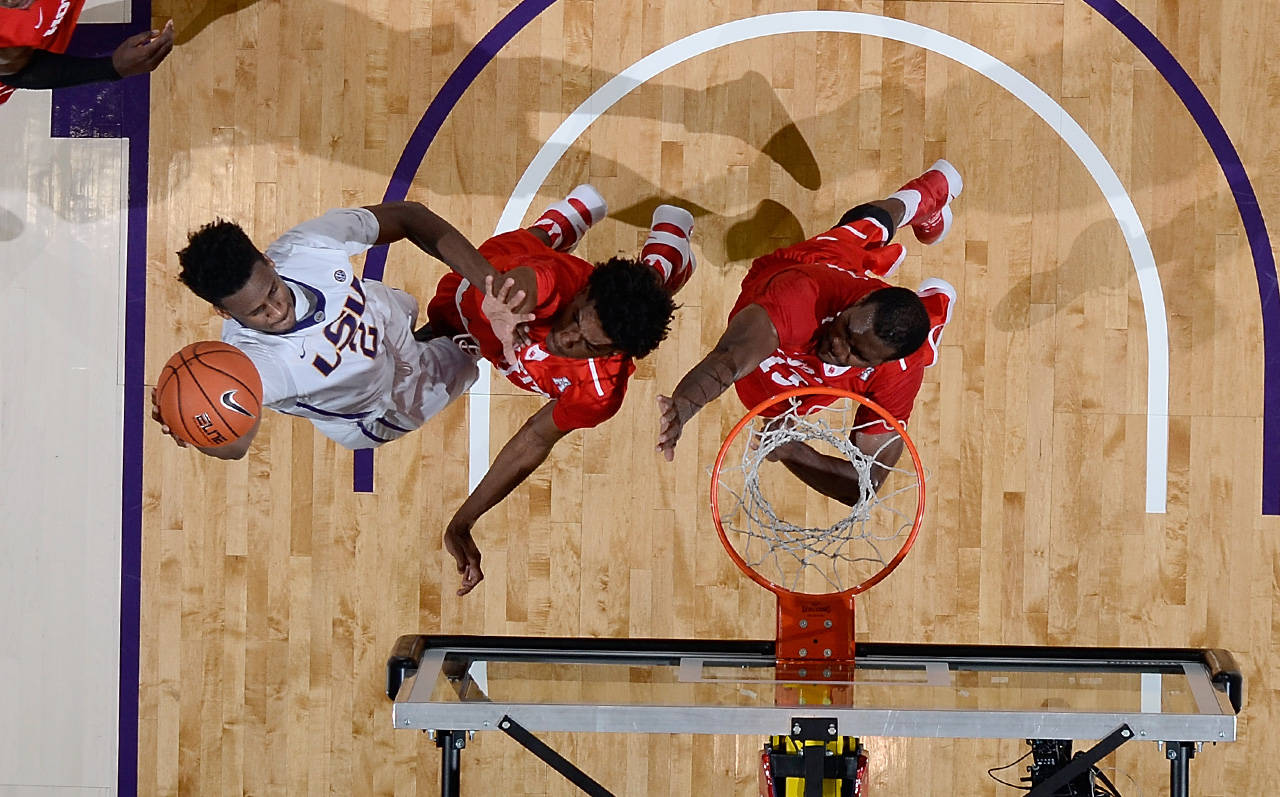 BATON ROUGE – LSU men’s basketball Coach Johnny Jones said that it was a “learning experience” in the Bahamas when the Tigers posted a 1-2 record last week in the Battle 4 Atlantis.

It was lesson learned for the Tigers Tuesday night at the Pete Maravich Assembly Center as the Tigers were able to drop undefeated Houston, 84-65, as LSU upped its season record to 5-2. The Cougars fell to 5-1.

It was a good way for the team to head into what will be a two-week break from game competition as the school enters concentrated study period and then final exam week which begins on Monday. The Tigers will then play three games at home in seven days beginning on Dec. 13 against NC Central.

The Tigers starred offensively and defensively against the Cougars turning the tables from an overtime loss against Houston last year in Houston.

Antonio Blakeney posted his third 20-point game of the season with 23 points, while Brandon Sampson had 16 points and three blocks with Craig Victor II (in his fourth game back with the team and his first start of the season) had 13 points, nine rebounds and four steals.

Aaron Epps off the bench hit all five field goal attempts and had 11 points, while Skylar Mays had an 11 on his line, 11 assists, the first time an LSU player had double digit assists since last November when Ben Simmons had 11 assists against NC State in a game in Brooklyn.

Rob Gray had 19 points to lead Houston, while Damyean Dotson had 13 and Devin Davis 12.

Blakeney and Sampson, who did not have great shooting nights in the Bahamas except for Sampson who had a big game in the ODU win, combined for 16-of-32 from the floor and more importantly with Blakeney getting three treys and Sampson four, they combined to go 7-of-12 from the arc.

The first half was a game of offensively flow as both teams started hot before cooling off and the offensive action slowing down. Houston built a four-point advantage at 30-26 on two free throws by Gray and 35-31 on a Dotson three-pointer for its biggest leads of the night before LSU was able to take the lead for good right before the halftime buzzer.

With Houston going for the final shot of the half, Brian Bridgewater stole a ball from Galen Robinson, Jr., and Mays found Blakeney for a layup with one second to go to send the Tigers to the dressing room up, 39-38.

In the second half, the Tigers stepped up their defense and that helped lead to a strong 20 minutes of offense as LSU held Houston to just 8-of-24 shooting in the final 20 minutes while LSU was making 20-of-34 shots (58.8 percent). That led to a 36-of-72 night from the field with eight treys, while Houston made just 21-of-52 for the game with 5 treys.

It was a box score that the LSU coaching staff had to like with a 46-28 advantage in rebounding including 20-9 on the offensive end. Victor led LSU with nine, Blakeney had eight, Epps seven and Sampson six.

Duop Reath saw his double figure scoring streak stop at six games but his five blocks marked the first time an LSU player had five blocks in a game since Jordan Mickey had six in a game versus NC State on March 19, 2015.

HEAD COACH JOHNNY JONES
Opening Statement …
“We are really excited to have a victory tonight against a very tough basketball team. (Houston) has done a tremendous job with a lot of guys back from last year’s team that finished at the top of its conference. They wound up going to the NIT. They have a lot of guys back from the team that we went into overtime with last year that really impact the game. I thought our guys did an excellent job of really coming out tonight and playing a full 40 minutes, especially in the first half without Duop (Reath) to hold on and play that well. Then, in the second half, we came out and did a great job offensively executing, and on the defensive end, we were getting stops early. As the game continued to play out, I thought our guys did a tremendous job of competing at a really high level against one of the better teams that we will have the opportunity to face prior to conference plaouncing back with a win after the trip to the Bahamas y.”

On bouncing back after the trip to the Bahamas…
“I think it’s huge for us to have an opportunity to get back home after going to the Bahamas and playing three really tough games against some really stiff competition. The trip really served a purpose for us because we came back with a different focus, mindset, in terms of how we needed to play and the level. We have a lot of new guys, a lot of new faces. I thought the urgency that our guys played with was transferred from our play there.”

On the complete effort in the win against Houston …
“I thought that this was the best 40 minutes that we have played all year long. The guys did a tremendous job of sharing the basketball, playing the game. The energy that they expended on the defensive end of the floor and the plays that they were able to make down there created some offense for us. The way that they rebounded the basketball against a very tough team as well coincided with the way that we scored as well because we had a bunch of second chance opportunities.”
—

On the teams rebounding…
“Winning the war on the boards and trying to get second-chance points was a focus, that’s why Coach (Johnny Jones) started sending me to the glass. Craig (Victor) and all the bigs were really trying to get to the rebounds because we got beat on the boards in the Bahamas. So we were just trying to correct our mistakes.”

On how having Craig Victor out helps on offense…
“It helps us a lot because he slows us down. If I take a bad shot he doesn’t mind telling me that’s it’s a bad shot and that I need to try to get a better one. He’s a veteran and his maturity helps us out on offense a lot.”

On responding to Houston’s runs…
“They kept hitting shots. They’re a good and experienced team. All the guys that came back are capable of scoring and it’s a game of runs so we had to keep going back at them. We withstood their runs really well and got out and got transition buckets.”

On his and Antonio Blakeney‘s shooting performance…
“I think we shot the ball with more confidence tonight. Everything went down and I think we just got more comfortable. With Skylar (Mays) looking for us we got good looks and we knocked them down.”

On if tonight’s performance was the team’s best of the year…
“I believe so. We had a couple good consecutive practices leading up to this game. We had a good experience in the Bahamas and we just wanted to come back and better ourselves.”
—

Houston Head Coach Kelvin Sampson
On LSU’s success on the boards…
“Well you don’t have to be a rocket scientist to figure that out. We’ve got the ball with a one-point lead in the last 10 seconds of the first half, and it’s going to be our ball to start the half. I think our biggest lead was four. We’re up four, and that’s when (LSU) bank one of those threes in. I wanted to get the ball at five there late in the first half, but they kept hurting us on the offensive glass. Still, we have the ball with a one-point lead with under 10 seconds to go. We go down and get a strip, and they come down and get a layup. That was a big play. I didn’t think we played very well at all in the first half in any area, but we had a chance to get the lead going into the second half, and I thought that would have been significant. But even coming out of the second half, we’ve got the ball first, but I didn’t see a lot of pop tonight. Their size was a factor. We had three starters who didn’t get a defensive rebound. We have to be a rebounding team, and that’s the only reason why I point that out. It’s not important who it was; it’s important that we had three guys in our starting lineup that did not get a single defensive rebound. Our best rebounder was a guy who came off the bench, but that’s something we’ve got to work on. It’s our first time playing a team with this athleticism and length. I thought for 20-plus minutes we were fine. Actually, I thought we should have been ahead at halftime. In the second half, I didn’t think the ball moved as well, but all of the things I’m disappointed in I think can be fixed.”

On what the team has to do to get focus back…
“Obviously, we’ve been a good rebounding team in the past, and I think we will be in the future. We have to have certain guys step up. We need them to rebound, especially guys that are playing most of the minutes. When I talk to other teams and coaches around the country that have seen us play, one of the things that everybody’s impressed with is how well we move the ball and how unselfish we are. I didn’t see that tonight. I thought the ball got sticky, and guys were kind of playing on the first side of the floor. All those are things that we can fix. Obviously, we’re six games in and it’s still a process. We’ve got to believe in the process. We’ve got some good kids in that locker room, and I have no doubt they will (get it fixed).”