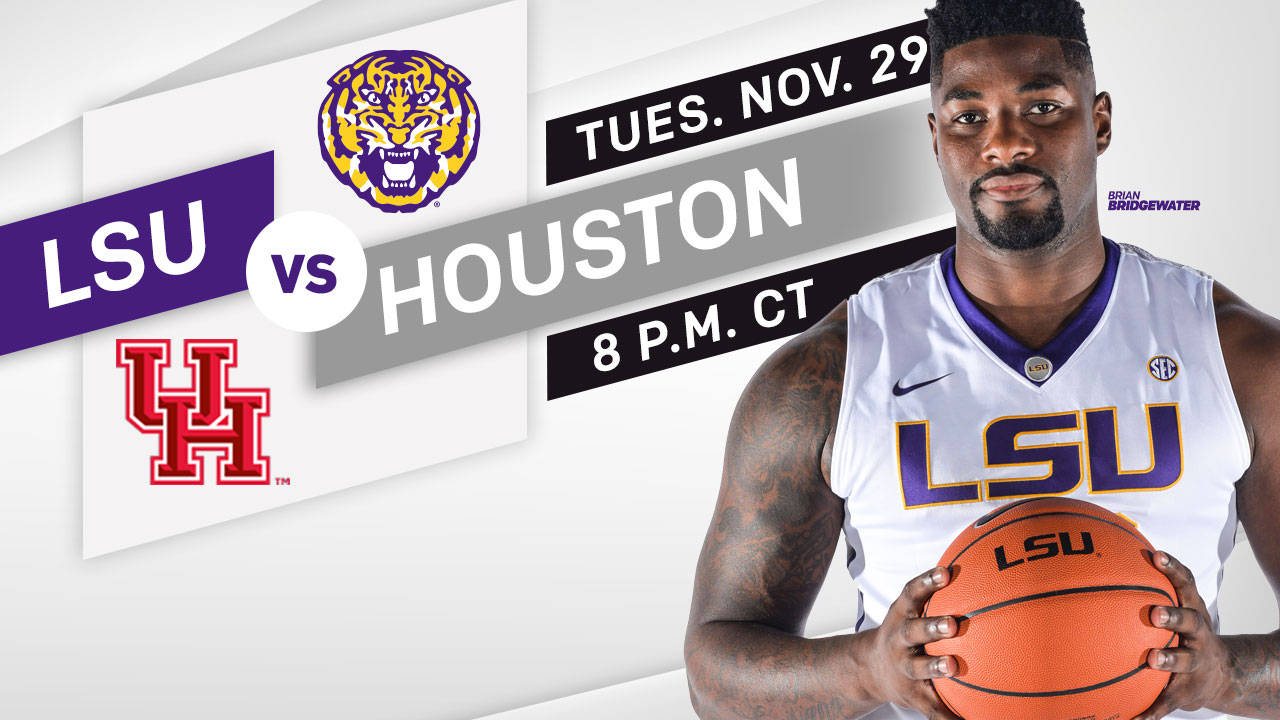 BATON ROUGE – The LSU Tigers play their last game before the final exam break Tuesday night when they host undefeated Houston in the Pete Maravich Assembly Center in an 8 p.m. game televised on the SEC Network.

Tickets for the game are available at LSUtix.net and at the upper concourse ticket windows of the Maravich Center beginning at 6:30 p.m. on Tuesday. LSU students are admitted with a valid ID.

Attending LSU students will have the opportunity to win up to $1,000 for class books for the 2017 spring semester plus other great prizes, including prizes from corporate partner and game sponsor Community Coffee. To qualify simply download the LSU Geaux Rewards student app on Apple or Android and show up to the game. Twelve contestants will be selected via the app.

Dave Neal and Antoine Walker will have the call on the SEC Network, while Chris Blair and Henry Hays will return to the broadcast chairs for the LSU Sports Radio Network (Flagship Eagle 98.1 FM in Baton Rouge).

The Tigers are 4-2 after winning one of three games against a very tough field at the Battle 4 Atlantis in the Bahamas while Houston is 5-0 after an 83-53 win over Cornell on Saturday afternoon. Houston won three games in the Gulf Coast Showdown in Estero, Florida, in its tournament appearance. Kelvin Sampson is in his third year as the head coach at Houston.

Last year, LSU rallied from nine down at the half to force overtime, but Houston hit all five field goals and made 9-of-12 free throws to win 105-98 in a December 2015 game in Houston.

The Tigers will be looking to clean up the turnovers and continue to improve defensively as they continued to show they could score the ball from several different points on the court, both inside and outside. The only change in the starting lineup while LSU was on the road came in the last two games when Jalyn Patterson came in to start at point guard.

That put Antonio Blakeney and Brandon Sampson as the other two guards with Duop Reath and Aaron Epps at the forward spots.

After this game the Tigers will have two weeks off because of the concentrated study period which runs the rest of the week and final exams which begin on Monday. LSU resumes play with four more games before the Christmas break, three of those at home beginning on Dec. 13.

Coach Johnny Jones met with the media Monday afternoon and here are some of his comments:

Opening statement…
“We’re excited to be back home and we’re looking forward to another great challenge and opportunity against a tough Houston Cougars basketball team that’s gotten off to a great start. They have several players from a team that we had a high scoring, overtime affair with last year on the road. They will certainly bring a very talented and experienced team in here (Tuesday) for an 8 o’clock tip. We’re hopeful about the trip that we just came off of (to the Bahamas). We had the opportunity to play three games against stiff, tough competition. Each team brought a different dimension in style of play in terms of the way they play. The opportunity to play three games in three days will benefit this team as the season continues to progress. It’s good for your team when you play experienced teams like that and teams that have had really good tradition in terms of the way that they play. I think it is really good for our team, players, and coaches. We wanted to make sure we got an early sense of where we were and I think its helped as a measuring stick. We look forward to building from it.”

On Craig Victor II‘s tournament performance…
“We’re really excited to have Craig back in uniform with the team. He’ll have the chance to be more productive for us (Tuesday). He’s a guy we look forward to getting a lot of minutes for us. He’ll be a difference maker for us. He’s good at defending the paint area and he’s more of a post presence on the offensive end of the floor. He’ll help us cut down on our turnovers because he’s a guy who understands what to do with making plays, passes and the sense of urgency that you have to play with on that end of the floor. Defensively we think he’ll bring value to our team. We didn’t think he’d get off to a great start having that type of layoff and not playing in games. To put him in that environment that we did against the caliber of competition that we played against, he didn’t have a warm up game. He was thrown straight into the fire and It was a little tough but we think those three games helped him. We look forward to him being very productive for us moving forward.”

On the shot percentage and selection of shots taken in the Bahamas…
“We’ve got to work on a little bit of both. We’ve got guys who are very capable shooters and we just have to get the right shots for them. We have a young, inexperienced team in some areas and as the team continues to progress we’ll help them find the niche that they need in the spots that we expect those shots to continue to come from. They will continue to get better. The other night I think we took some shots that were a little out of character for guys because of the difference in score. We had a deficit and I think sometimes guys will take shots to get us back in it and I think we may have taken some questionable shots. We’ll get better, I think we have an unselfish team and I think guys want to learn and want to get better. It’s going to take us some time, but I like the attitude of the guys we’re working with.”

On having a good game before going into the exam break…
“I think it’s always good for your psyche any time you have a longer layoff like that. I think it’s always good, especially with guys preparing for finals. I think those things always help when you have the type of break and if you’re playing well then it leads into your practices. At the end of the day we’ll have to make sure we’re having great practices regardless. We’ll be able to change up some things. We kind of have an idea of where we are. We’ve got some things that we really need to make sure we improve on and we’ll utilize that time wisely when we’re on the break … It’s great having that time off knowing you just came off a victory. It’s much better than having a setback.”

On last year’s game with Houston…
“I thought it was a game that was somewhat similar to what we faced in the Bahamas early on in our season, going to play a good, formidable team on the road. They’re talented, but unfortunately we went in and It was (Keith) Hornsby’s first game back and he played exceptionally well. He had thirty-plus points including overtime. Craig Victor did not dress and play with us that day and unfortunately Jalyn Patterson didn’t dress either; he had hurt his knee prior to the game. We were down some of our weapons and went into a tough battle and unfortunately came up a little bit short. We couldn’t get it done in regulation and Ben Simmons fouled out of that game as well. A lot of things were against us being on the road but our guys continued to fight pretty hard and we’ll have that type of challenge (Tuesday).”

On how this year’s Houston team compares to last year’s Houston team…
“There are a lot of similarities, just more experienced. A lot of the guys that hurt us last year are back. Gray, who is one of their guards and is a high scorer, is back. Knowles, who scored 20-plus points, is back as well. They have a young man who transferred in from Oregon who is playing exceptionally well for them right now. They have a lot of good pieces and they’re a team that I think will finish right there at the top of their conference.”

On Aaron Epps performance …
“Aaron has done a really good job and he will certainly be commended for the way that he has played and what he’s done for this team and how he’s really helped us during the absence of Craig Victor. We look for him to continue to get some valuable minutes for us. On offense he’s shown what he’s really capable of doing and what he can do on the defensive end. He’s gotten bigger and stronger and he plays with the urgency we need. He’s rebounded in traffic and those kinds of things. We’re really pleased with him along with Wayde Sims who has come in and played inside and outside for us. You add that group of guys together in the paint area and that’s a group of guys down there that we can trust and get some valuable minutes out of. We’re really excited about Aaron and think he’ll certainly be a big part of our rotation.”

On Ed Orgeron becoming the Head Coach of the football program…
“I’m really excited for Coach Orgeron and for Tiger Nation and his family in what I think he’s going to have an opportunity to provide. He’s a guy who’s very passionate about his job and what he’s doing. I think he’s shown that in the latter part of the season in the position that he held and even prior to that. I’ve been on several speaking engagements with him and just to hear how he’s so passionate about the purple and gold, I’m just so happy for him … It’s certainly going to take all hands on deck and not just their staff but also the state rallying around the program to get it to where he wants it to go. He’s talking about becoming more nationally prominent and it’s going to take everyone and he understands that and I can’t be more excited for a person who’ll embrace it as much as he will.”