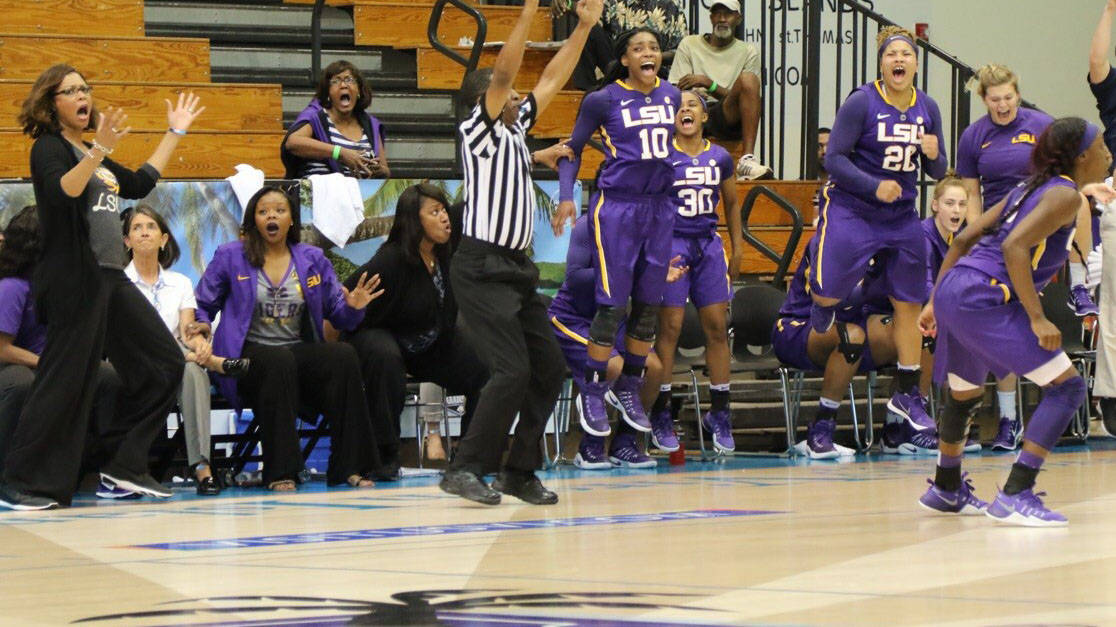 St. Thomas, USVI — Junior Raigyne Moncrief hit just the second 3-pointer of her career but it was the game winner with just four seconds on the clock in the 59-58 victory over NC State here at the UVI Sports and Fitness Center Saturday afternoon on the final day of the Paradise Jam.

The Lady Tigers (5-2) finished as the second-place team of the Island Division with wins over UTEP and NC State and the loss to Kansas State. NC State (5-2) was the third-place team. Kansas State and UTEP were playing in the game following the LSU-NC State matchup.

Rina Hill got the Lady Tigers within four points, 56-52, with a jumper with just over a minute remaining in the game. NC State hit one of two free-throw attempts before Ayana Mitchell drained two charity shots to pull LSU within three points, 57-54, with 48 seconds left on the clock. Moncrief drove down for a layup to put LSU within one, 57-56, before Ashley Williams hit one of two free-throw attempts with six seconds remaining on the clock. Moncrief then raced across the half court line and got within two feet of the arc and threw up the game winner with four seconds left on the clock. Moncrief was 1-of-15 for her career from behind the arc before hitting the game-winning shot.

“We were looking at the clock after NC State’s player misses the free throw, and I am yelling at Ray (Moncrief) that we only need a two, get the two, get to the right,” explained head coach Nikki Fargas regarding the final LSU possession. “And then she elevates and shoots the pull-up three down the middle and it goes in. It takes a lot of guts for a player to come out and say ‘I’m going to take that shot,’ and she made it. And had she not, I think we possibly had enough time to grab the rebound and get the possible put-back.”

NC State came into the game averaging 75 points per contest and was held 17 points below its average. LSU has won two games when down at the half, with both of the victories coming over ACC foes NC State and Wake Forest. The Lady Tigers were down at the half to the Wolfpack, 31-26. The Lady Tigers, behind for all of the third quarter, never quit battling and outscored NC State, 20-8, in the final period.

“It’s a great win and I liked the fact that our kids continued to fight,” said Fargas. “It tells me a lot about our team that we are able to come back after a tough loss to a very good team like Kansas State and put together a turnaround and compete like they did today. NC State is a very good basketball team. They have guards who can shoot the three, they have size and athleticism. It was just a really good team win for us today. I am so proud of our team.”

“I just thought we did a nice job of one possession at a time, finding our way,” added Fargas. “We were down six points, three possessions, and we needed to get three stops, and we did. I am just very proud of this team.”

Freshman Ayana Mitchell recorded her first career double-double with 14 points and a career-best 16 rebounds. Senior Rina Hill also had a big game for LSU, scoring a season-high 12 points. Her previous high was nine points versus UTEP in the first round of the tournament.

Chloe Jackson, who was facing her former Wolfpack teammates, and Moncrief each contributed 13 points in the win. LSU was 3-of-7 from 3-point range, while NC State hit seven of 22 3-point attempts. LSU also dominated the boards with 35 rebounds to NC State’s 27 boards. Both teams were evenly matched in the paint, scoring 22 points each, and LSU won the fastbreak battle, 12-6.

Following the tournament, the Lady Tigers will have a bit of a break, considering the frantic pace of November. LSU will host TCU in an SEC/Big 12 Challenge game on Dec. 4. With finals preparation, LSU will play just two games in 15 days, following the Dec. 4 TCU game with a contest against Tulane on Dec. 11 at the PMAC.

• Starters for LSU were: Raigyne Moncrief, Chloe Jackson, Shanice Norton, Alexis Hyder and Ayana Mitchell.
• LSU has used the same starting lineup in all seven games this year.
• Freshman Ayana Mitchell logged her first career double-double with 14 points and 16 rebounds. The 16 rebounds were a career high as her previous best was seven boards versus Wake Forest.
• The 12 points by Rina Hill is a season high for the senior. Her previous high was the nine points in the first game of the tournament against UTEP. She was 6-of-9 from the field vs NC State.
• This was the first game this season that four Lady Tigers had scored in double digits in a game.
• LSU takes the 2-1 series advantage over the Wolfpack. This is the first game on a neutral court.
• The Lady Tigers are 22-18 all-time over current members of the ACC; and 2-0 this year, which includes the win over Wake Forest in game two.
• With the win today, LSU is 44-13 in regular-season tournament games, dating back to 1996.