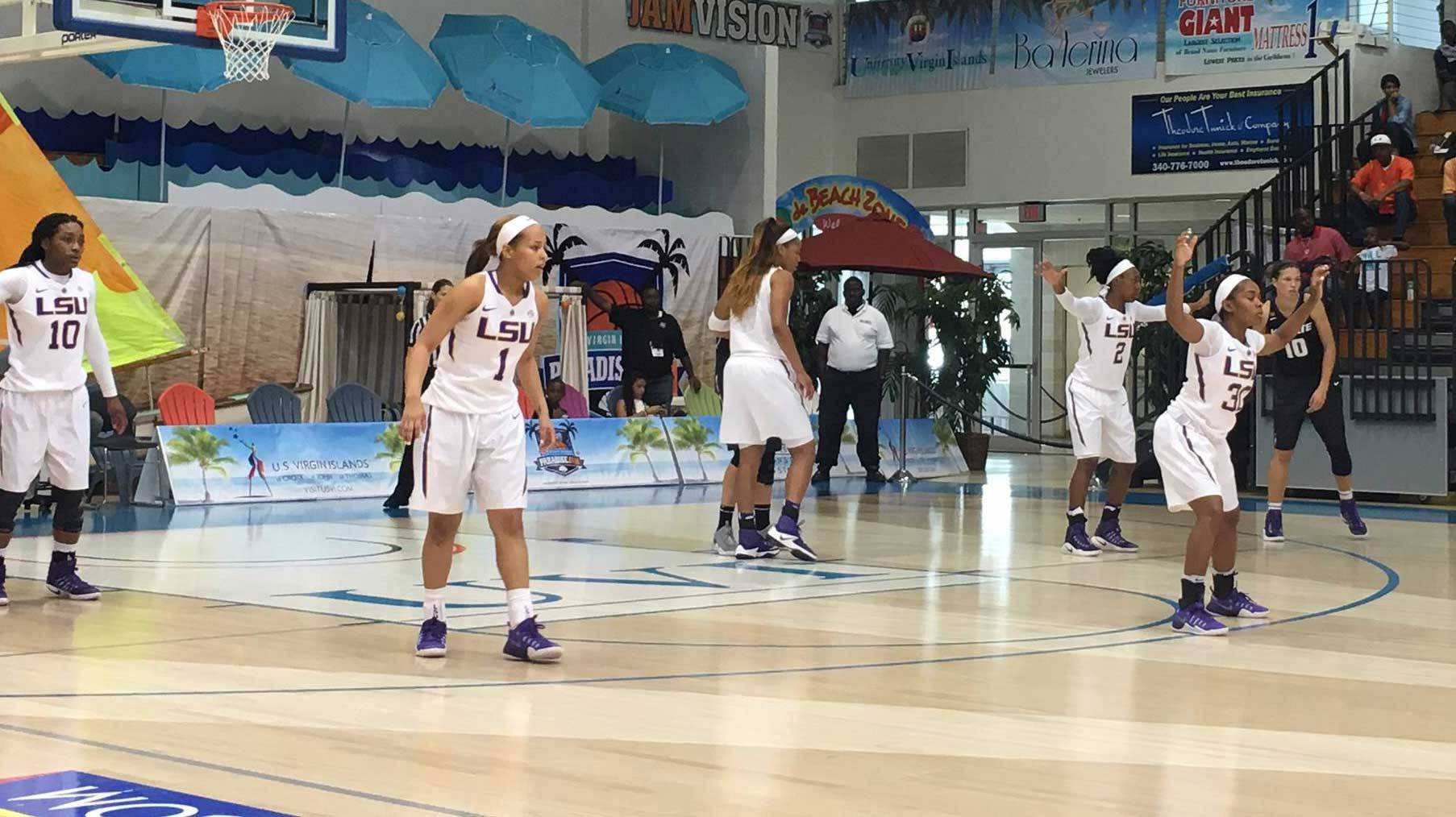 St. Thomas, USVI — The LSU women’s basketball team fell, 69-54, to Kansas State here at the UVI Sports and Fitness Center Friday afternoon on day two of the Paradise Jam. The Lady Tigers dropped to 4-2 on the year and Kansas State improved to 5-0.

LSU and Kansas State traded leads early in the first half until the score was knotted, 12-12. LSU took the 14-12 advantage at the end of the first quarter and went on a 4-0 run off a jumper and two free throws by Raigyne Moncrief. K State then used an 11-0 run to push their lead to 25-18. The Lady Tigers clawed their way back and Chloe Jackson picked up a crucial steal and layup with just over 30 seconds remaining in the second quarter to push LSU up, 30-29. With the final seconds ticking off the clock, K State’s Kindred Wesemann dropped in her third 3-pointer of the half to give her squad the narrow 32-30 lead at the half.

The Wildcats came out strong in the third quarter and LSU turned the ball over seven times in the first half of the period as K State jumped to a 41-33 lead. The Wildcats led by as many as 17 points and outscored LSU, 19-8, in the third quarter. The Lady Tigers continued to fight, but the third-quarter deficit was too much to overcome. Kansas State held the 18-16 advantage in the fourth quarter en route to the 69-54 victory.

“The game is 40 minutes,” said head coach Nikki Fargas. “We can’t just play three quarters and not be effective for four. We played a very quality basketball team in K State. They are a team that has a balanced attack offensively. We played a lot more man than we have in the past and we are going to have to keep working on our man-to-man defense.

“Offensively, we did not take care of the basketball and that led to a lot of transition baskets for K State,” added Fargas. “That is something that we wanted to do. We want to turn people over. We struggled to put the ball in the hole. We have to give ourselves a chance to score the basketball.”

Kansas State dropped in 11 3-pointers in the contest, five of which were by Wesemann, who led her squad with 24 points. LSU’s Jackson hit three treys in the loss, as the Lady Tigers were 3-of-9 from behind the arc. KSU also led on the boards by a margin of 36-29. Of their 36 boards, 27 were defensive rebounds.

The Lady Tigers will face NC State (5-1) in the final day of the tournament on Saturday at noon CST. NC State lost to Kansas State, 67-50, on Thursday, and defeated UTEP, 71-55, Friday afternoon. One Lady Tiger is familiar with NC State as Chloe Jackson will be facing some of her former teammates on Saturday. Jackson transferred to LSU after one season at NC State and sat out the 2015-16 season. She played just four games for the Wolfpack in 2014-15 after breaking her foot early in the season.

The LSU Sports Radio Network will carry all of the Lady Tigers’ games of the tournament on its flagship station Talk 107.3 FM in Baton Rouge. The radio broadcast featuring Garrett Walvoord, is available for free at www.LSUsports.net/live. All games of the U.S. Virgin Islands Paradise Jam will stream live online at www.FloHoops.com. Fans can purchase a monthly or annual subscription to watch the games.

• Starters for LSU were: Raigyne Moncrief, Chloe Jackson, Shanice Norton, Alexis Hyder and Ayana Mitchell.
• LSU has used the same starting lineup in all six games this year. Last season, with all of the injuries, LSU had used three different starting lineups in the first six games.
• Freshman Yasmine Bidikuindila scored her first points of the season in today’s game. She scored four points off 2-of-3 shooting from the field. She also had a rebound.
• The Lady Tigers are now 36-13 against current members of the Big 12 Conference.
• K State came is now 4-2 over LSU in the series history between the two squads.
• With the loss today, LSU is 43-13 in regular-season tournaments, dating back to 1996. LSU’s last tournament championship was in the 2013 Barclays Invitational in Brooklyn, N.Y. LSU defeated Rutgers, 69-65, in the first round and Michigan, 64-62, in the title game.