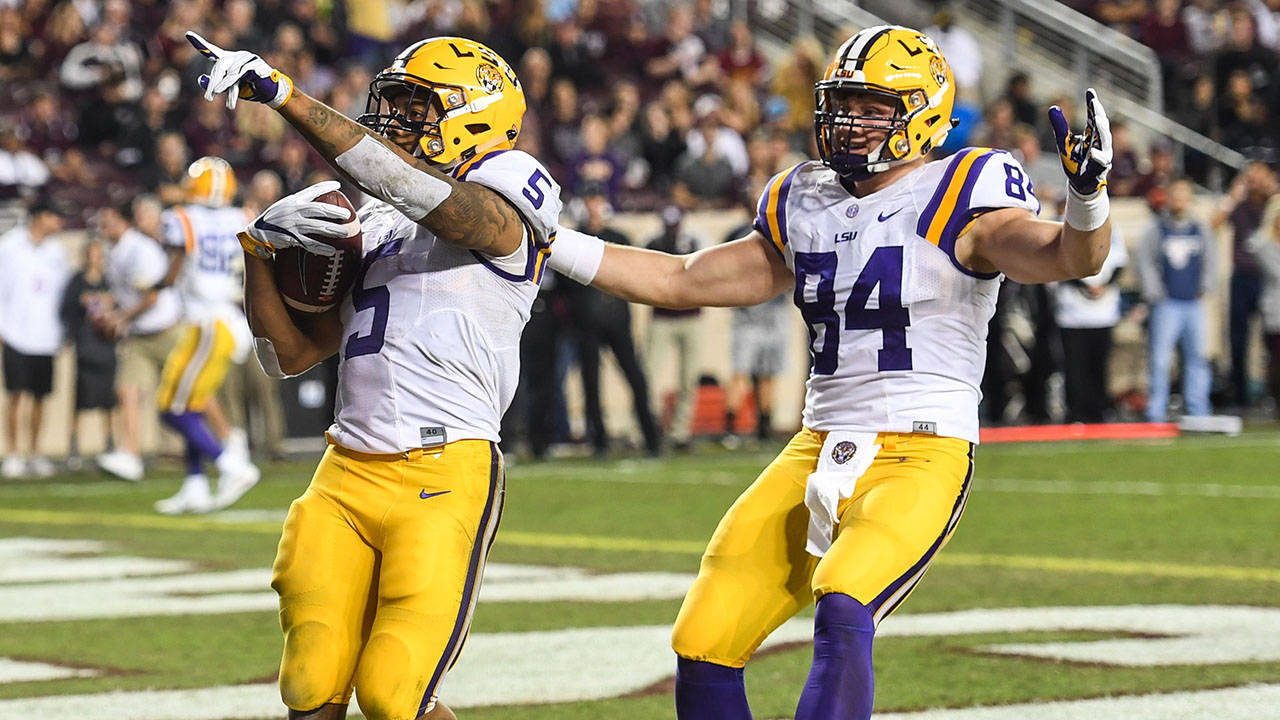 LSU’s 622 yards of total offense was second-most in a true road game in school history. Tonight was the first game in LSU history in which the Tigers had a 300-yard passer and a 200-yard runner.

LSU (7-4, 5-3 SEC) awaits its postseason bowl destination, which is expected to be announced on Dec. 4.

Etling, a junior transfer, had his best evening as a Tiger, completing 20-of-28 passes for 324 yards with touchdowns of 20 and 9 yards.

LSU won the coin toss and elected to receive the opening kickoff. The Tigers took advantage of the rare decision to start the game on offense, as Guice rushed three times for 65 yards on the four-play drive. He put LSU on the board with a 45-yard touchdown run with 13:16 left in the first quarter.

After LSU was pinned at its 4 and punted, Texas A&M answered the second on its second offense drive with a 36-yard touchdown reception by Christian Kirk from Knight. Knight ran for 12 yards on third-and-10 before connectin with Kird on third-and-7 to tie the game at 7-7 with 6:05 on the first-quarter clock.

A 31-yard catch and run by LSU tight end Foster Moreau – and a face mask penalty tacked on to the run – gave the Tigers a first down at the Aggies 12. However, after an incomplete pass at the goalline, Guice’s run came up short and LSU settled for a 23-yard field goal by Colby Delahoussaye. LSU led 10-7 after outgaining the Aggies in the opening quarter, 149-77.

Etling started the second quarter by picking up a third-and-4 with a 9-yard pass to Russell Gage, also the converted wide receiver’s first career reception. Guice added an 11-yard run to the LSU 42 before Etling connected with freshman wide receiver Dee Anderson for 17 yards across midfield. Three more Guice runs totalled 29 yards and moved the back over 100 for the game. However, Moore fumbled then recovered the handoff on third-and-1. The missed exchange led to a 32-yard Delahoussaye field goal and a 13-7 LSU advantage with 11:02 to play in the half.

Two plays later, Etling turned the mistake into a touchdown with a perfect 20-yard pass to Dupre in the left corner of the endzone.

A 66-yard kickoff return by Kirk to the LSU 34 started the second half, but LSU’s defense allowed only three yards and a 49-yard field goal by Daniel LaCamera was true.

Guice and the Tigers wasted no time getting the score back, as the sophomore back scored his second 45-yard touchdown of the evening to put LSU ahead 27-10 after a five-play, 75-yard drive.

A turnover on downs by Texas A&M was turned into another Guice touchdown. The key play of the drive was a 39-yard pass from Etling to D.J. Chark to the Aggies 21. A 16-yard catch by Dupre setup Guice’s third score, this time from 6 yards. LSU led 34-10.

Meanwhile, LSU used a 22-yard reception by tight end Colin Jeter on first-and-20 to move across midfield. On third-and-5 at the Aggies 30, Etling tossed a perfect pass between three defenders to Gage for 24 yards to the Aggies 6.

On the first play of the fourth quarter, Chark took an end-around 7 yards to the right corner of the endzone. LSU led 41-17.

As LSU went deeper into its bench, Texas A&M wasted to time answering the score. Knight finished off a six-play, 75-yard drive, with a 44-yard catch and run by Kirk. A two-point conversion narrowed LSU’s advantage to 41-25 with 13:07 to play.

The scoring spree continued, as LSU’s Gage had a 9-yard touchdown reception, his first as a Tiger. The two-point try was unsuccessful and LSU led 47-25.

A&M continued to move the ball well in the quarter, as Knight polished off a four-play, 75-yard scoring drive with a 32-yard pass to Josh Reynolds. A two-point conversion was successful and LSU led 47-33 with 8:45 to play.

Guice added his fourth touchdown of the game and later eclipsed Fournette’s rushing record of 284 yards.

When you remember you still have those Thanksgiving leftovers to eat… pic.twitter.com/NWUegcVEiU

With 285 yards on 37 carries and four TDs in a win against Texas A&M, @DhaSickest broke the LSU single game rushing record! #AllForLSU pic.twitter.com/gWXXbkcBte