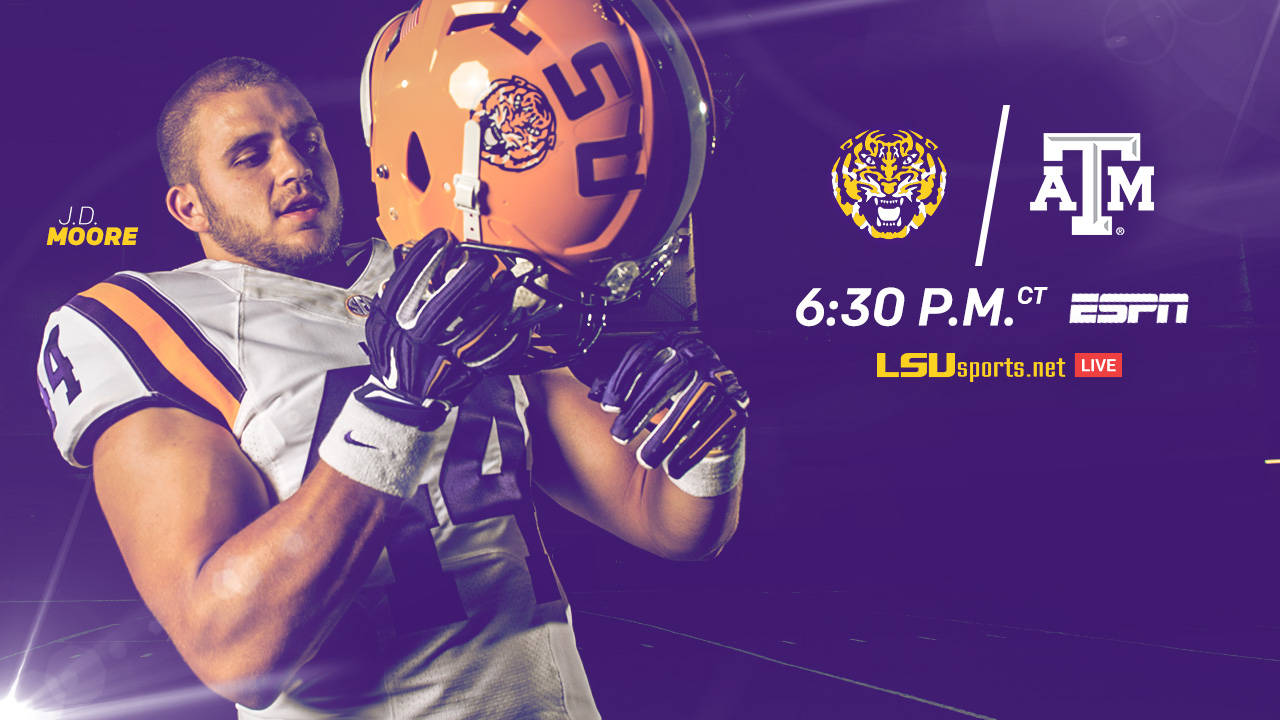 MONTGOMERY, Texas – LSU has never lost a Southeastern Conference game to Texas A&M since the Aggies joined the league in 2012 as the Tigers have won all four games between the teams during that span. The Tigers will look to extend that streak another year when the teams square off on Thanksgiving night at Kyle Field.

Kickoff between the two SEC Western Division rivals is set for 6:32 p.m. and the game will be televised on ESPN with Dave Flemming (play-by-play), Jesse Palmer (analyst) and Laura Rutledge (sideline reporter) on the call.

LSU brings a 6-4 overall mark and 4-3 league record into the contest following last week’s 16-10 setback to Florida in Tiger Stadium. Since taking over the Tigers following another last-second loss to Auburn in late September, head coach Ed Orgeron has guided LSU to 4-2 overall mark, which includes a 3-2 record in conference games.

The Aggies, who won their first six games of the season and climbed as high as No. 4 in the initial College Football Playoff Rankings, are 8-3 overall and 4-3 in SEC play. Texas A&M is coming off a 23-10 non-conference win over Texas-San Antonio last week.

The LSU-A&M Series
The Tigers have won five straight in the series against the Aggies which dates back to a 41-24 win over Texas A&M in the 2011 Cotton Bowl. The Aggies joined the SEC in 2012 and since then, LSU is 4-0 against Texas A&M, which includes a 19-7 victory last year in Tiger Stadium. LSU remains the only team in the SEC Western Division that Texas A&M hasn’t defeated since joining the SEC in 2012. Overall, LSU leads the series, 31-20-3.

Tiger Defense Continues To Thrive
LSU’s defense seems to get better each week as the Tigers are coming off another dominant effort despite the loss to Florida. Against Florida, LSU limited the Gators to just one touchdown and three field goals in the 16-10 defeat.

LSU’s defense, under the direction of first-year coordinator Dave Aranda, ranks No. 2 in the SEC in rush defense (115.2), No. 3 in scoring (14.1) and total defense (308.1) and No. 5 in pass defense (192.9). LSU has allowed only 11 touchdowns all year, the fewest among all FBS teams and the Tigers remain the only team in the nation that hasn’t allowed an opponent to score more than 21 points.

Individually, the Tigers will be without their leading tackler Kendell Beckwith, who will miss the contest after suffering an injury last week against Florida. Beckwith has 91 tackles to his credit, which ranks second in the SEC.

Linebacker Duke Riley, a Senior Bowl invitee, is second on the team with 81 tackles, 8.0 tackles for loss and 1.5 sacks, while safety Jamal Adams has 65 tackles, including 4.5 tackles for loss. Defensive end/outside linebacker Arden Key leads the SEC in sacks per game (1.0) and is two sacks shy of tying the school record of 12.

The Aggie Offense
LSU will try to slow a Texas A&M offense that is averaging 35.1 points and 467.7 total yards (220.2 rushing, 247.5 passing). The Aggies are expected to start Jake Hubenak at quarterback in place of the injured Trevor Knight for the second straight week. Hubenak has thrown for 811 yards and six touchdowns in five games this year.

Other offensive standouts for the Aggies include freshman running back Trayveon Williams, who has rushed for 956 yards and seven touchdowns, while Christian Kirk leads the team in receiving with 69 receptions for 735 yards and seven scores.

When the Tigers Have The Ball
LSU will again rely on a balanced attack led by running backs Leonard Fournette (843 yards, 8 TDs) and Derrius Guice (964 yards) along the passing of junior quarterback Danny Etling. Etling, who is 5-3 as LSU’s starter, has completed 58.5 percent of his passes (124-of-212) for 1,582 yards, seven touchdowns and four interceptions.