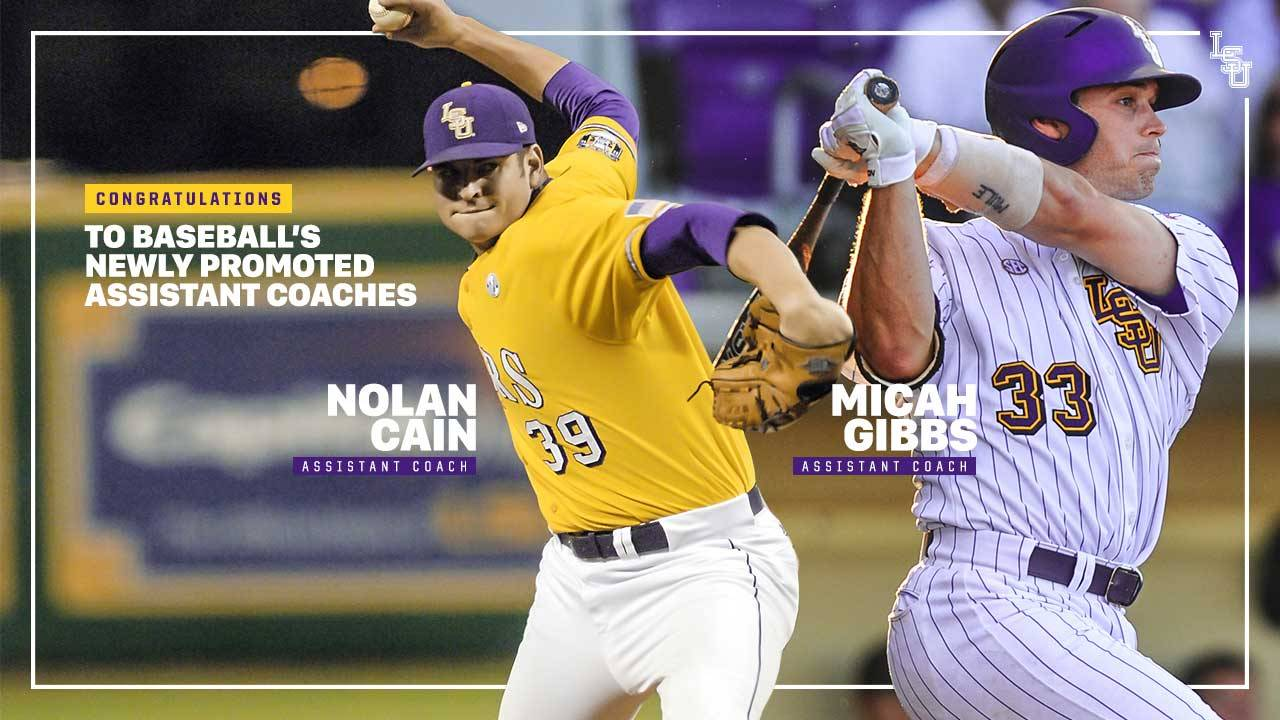 BATON ROUGE, La. – LSU assistants Nolan Cain and Micah Gibbs have been promoted within the Tigers’ baseball staff, coach Paul Mainieri announced Tuesday. Cain, formerly the volunteer assistant coach, has been named assistant coach/recruiting coordinator, and Gibbs, formerly the coordinator of operations, has been appointed volunteer coach and hitting coach for the 2017 season.

The promotions of Cain and Gibbs, both players on LSU’s 2009 national championship team, are effective immediately. A search will begin right away to fill the vacant coordinator of operations position.

Cain and Gibbs received the new assignments after the departure of hitting coach/recruiting coordinator Andy Cannizaro, who earlier this month was named head coach at Mississippi State.

“I felt it was important to divide the jobs of hitting coach and recruiting coordinator because it is really impossible to give due diligence to each responsibility with just one person handling both tasks,” Mainieri explained. “In order to do both jobs correctly and at the level necessary for sustained success, each assistant coach needs to focus on that one area. Beginning March 1, when the NCAA allows us to once again begin recruiting off-campus, our recruiting coordinator needs to get out to see our committed players play, continue to develop relationships with those guys – who in many cases will have to choose between LSU and professional baseball coming out of high school or junior college – and certainly to discover new talent for future classes.

“If our recruiting coordinator were also to be the hitting coach, then our current players would be short-changed because that coach would be missing practice and games. I’d rather our hitting coach be on campus all of the time and not miss out on the consistent work necessary for our hitters to succeed on a daily basis. I believe we have the two individuals already in the program that can make this model work.”

Cain, 30, worked as the Tigers’ third-base coach in 2016 – a role in which he will continue to serve – while also coaching the LSU catchers. He served for two seasons as the Tigers’ coordinator of operations, and he has handled a number of responsibilities within the program, including team travel, budgeting, and alumni and community relations.

Cain, a native of Cantonment, Fla., was a relief pitcher at LSU from 2006-09, making 73 career appearances on the mound. He helped lead LSU to the 2009 national title, recording a 5-0 mark and a 4.01 ERA in 33.2 innings with 10 walks and 38 strikeouts. He received his LSU degree in May 2009 and pitched at the AA level in the minor leagues after signing a free agent contract with the Detroit Tigers.

“Nolan Cain is a rising star in the college coaching ranks and we are fortunate to already have him at LSU,” Mainieri said. “Promoting him to this critical position of recruiting coordinator was a pretty obvious course of action to take. He possesses a wonderful combination of the qualities necessary to be a great recruiter such as  intelligence, work ethic, extreme organization, the ability to evaluate the talent that is right for LSU, and an engaging personality that will cause young ball players to gravitate to him.

“In a very short time Nolan will develop the contacts throughout the baseball circles – including with professional scouts, travel ball coaches, high school coaches and advisors – because people will like him and want to help him and LSU in his quest to discover our future Tigers. Nobody loves our university or LSU Baseball more than Nolan, and his loyalty to our program combined with all of his other outstanding qualities means he cannot fail to succeed in this role.”

Cain and his wife, the former Kristen Hobbs, have one son, Cason. Kristen played softball at LSU from 2004-07 and now works as the Special Events and Community Relations Coordinator for the LSU athletic department.

Gibbs, 28, was the third-round draft choice of the Chicago Cubs in 2010 after posting one of the highest single-season batting averages in LSU history, as the former catcher hit .388 with 14 doubles, three triples, 10 homers and 60 RBI. He was appointed LSU’s coordinator of operations in February 2016 after playing six seasons in the minor leagues – where he reached the AAA level – with the Cubs, the Kansas City Royals and the Los Angeles Dodgers.

“Micah Gibbs was born to be a coach,” Mainieri said. “Even as an outstanding player at LSU, he was always very analytical and a student of the entire game of baseball. I can remember thinking years ago that if I ever had the chance someday to add Micah to our staff, I would want to do so because I felt he would make a tremendous coach.

“In talking to people that had worked with Micah throughout his professional baseball career, they told me how he was constantly picking the brains of all of his coaches in his thirst to gain more and more knowledge about hitting. With the addition of our video coordinator, Jaime Tutko, combined with the fact that all SEC games are now televised, we are now able to do more and more analysis of our opponents in preparation for how we want to set an approach against the pitchers in games. This will be right up Micah’s alley and will aid our hitters tremendously.”

Gibbs, who earned an LSU degree in sport administration in December 2014, was also the starting catcher for the United States National Team that won a gold medal at the 2008 World Championships in the Czech Republic.

Mainieri said Gibbs will maintain LSU’s standing as one of the best offensive teams in the Southeastern Conference. Beginning with the 2008 season, the Tigers have finished among the league leaders in most offensive categories.

“We have a great tradition of offense at LSU,” Mainieri explained. “Even though ‘Gorilla Ball’ is a thing of the past because of the many rule changes to college baseball over the years, during the last nine years at LSU we have consistently ranked among the top three offensive teams in the SEC in runs scored per game, batting average, and toughest to strike out. We have done that with three different hitting coaches (Cliff Godwin, Javi Sanchez, and Cannizaro) all of whom I hired with no previous experience as hitting coaches. They all did a great job and implemented our philosophy of self-confidence combined with an attacking, aggressive attitude.

“Having been involved with the team over the last 10 months, Micah knows all of our hitters well on an individual basis and, as opposed to bringing in someone that may want to make sweeping changes, I felt the best course of action was to go with someone that was familiar with our personnel already. I have no doubt that Micah Gibbs will continue to bring out the best in our hitters going forward.”

Mainieri said the 2017 staff will also be bolstered by the addition of undergraduate assistant coach Sean Ochinko, a catcher and first baseman on LSU’s 2009 CWS title team.

“We’re very fortunate this year to have former LSU great Sean Ochinko on the staff,” Mainieri said. “Sean just finished a six-year career in professional baseball and is back at LSU completing his degree requirements. His vast knowledge and experience in the game will also help our players in many ways. He will work with the catchers and first basemen, as well as coaching on the bases. In addition, he will provide aid to Micah with the hitters, as needed.

“For our current players to have three former great players – Nolan, Micah and Sean – that were all part of a national championship team at LSU, and then had admirable professional careers before turning to coaching, is a tremendous opportunity for them to learn what it takes for us to win the seventh national championship in LSU Baseball history.”