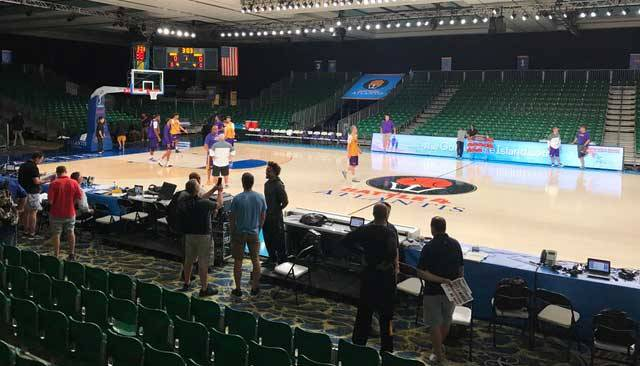 PARADISE ISLAND, Bahamas – The LSU men’s basketball team went through a couple of hours of practice and scouting report work Tuesday in preparation for Wednesday’s opening round game in the sixth “Battle 4 Atlantis” against Wichita State.

The event will take place in the converted Imperial Arena which seats about 3,500 for the contests. The Tigers and Wichita State will play in the opening contest at 11 a.m. CT (Noon local) and will be televised by ESPN2 with Dave O’Brien and Dan Dakich on the call.

Patrick Wright will have the call on the affiliates of the LSU Sports Radio Network (Flagship affiliate Eagle 98.1 FM in Baton Rouge).

The rest of the opening round will have Baylor against VCU at 1:30 p.m. CT (also on ESPN2) with the night session featuring Michigan State and St John’s at 6 p.m. CT and Old Dominion and Louisville in the 8:30 p.m. CT nightcap. The evening games are televised by AXS-TV with Kenny Rice and Seth Davis the broadcasters.

The Tigers will face either Old Dominion or Louisville in the second round with an LSU win putting the Tigers in the championship semifinals at 1:30 p.m. CT on Thanksgiving and a loss putting LSU in the consolation semifinals at 8:30 p.m. Thursday night. The final round of games are on Friday.

“We are extremely excited to have the opportunity to play in an event in the early part of the season against such quality competition,” said LSU Coach Johnny Jones, in his fifth season at the helm of the Tigers. “It is certainly a great challenge that we look forward to. This early part of the season will give a great feel and idea where our team is and should be a great experience for us.”

LSU (3-0 entering the tournament) mostly ran drills and shot in the hour in the Imperial Arena Tuesday morning before moving to a smaller ballroom where a full-size court was put in for use by the teams in the second hour of their workout. There the Tigers went into the scouting report for Wichita State during the majority of that session before attending the pre-tournament press conference.

There sophomore guard Antonio Blakeney talked about his team through the first three games.

“We are just learning every game and trying to hold the (opponents) to the least amount of points we can. We did well in some games in spurts, but we are not where we should be. But we are getting there and that is what we are trying to show in this tournament.”

The Tigers will face a Shocker team that is 4-0 and coming off a 116-79 win over Maryland Eastern Shore on Sunday. The Shockers are averaging 93.3 points per game and allowing just 56.5 points a contest and shooting 52.3 percent from the field.

Markis McDuffie and Zach Brown lead Wichita State in scoring at 11.5 points per game. Blakeney leads LSU at 18.7 a contest after back-to-back 20-plus point scoring games.

“We are looking forward to seeing how our team reacts to this tournament – the environment, the quality of the opponents,” said Gregg Marshall, head coach of Wichita State, after his team’s workout. “We are a fairly inexperienced team, but we have shown a lot of promise in our first four games. We have been working hard since this summer with our exhibition tour. Now, we get a chance to play some of the finer basketball programs in the country and see how we measure up.”

Jones, who became the fourth winningest head coach in the history of LSU basketball with his 83rd win on Friday over North Florida, knows the tournament will do nothing but continue to improve the Tigers.

“We are a work in progress and obviously have a long way to go,” he said. “We have a young team and new guys – a lot of new faces. We have inserted a lot of guys, but the good thing is the energy and excitement surrounding these guys. We have really focused more so on defense. It is just a matter of attention to detail and making an assertive effort to be more conscious of that end of the floor. And, understanding we can win games that way. If we can improve on the defensive end of the floor that will help us immensely.”

Coach Jones also said that junior forward Craig Victor II would dress and should see minutes in the game on Wednesday after serving time off for a “team rules” situation. Victor averaged over 11 points a year ago for the Tigers after transferring in from Arizona at the mid-point of his freshman season.

Jalyn Patterson who had eight assists against North Florida is expected to share the guard spot with Victor II spelling both Reath and Epps at the forward spot.