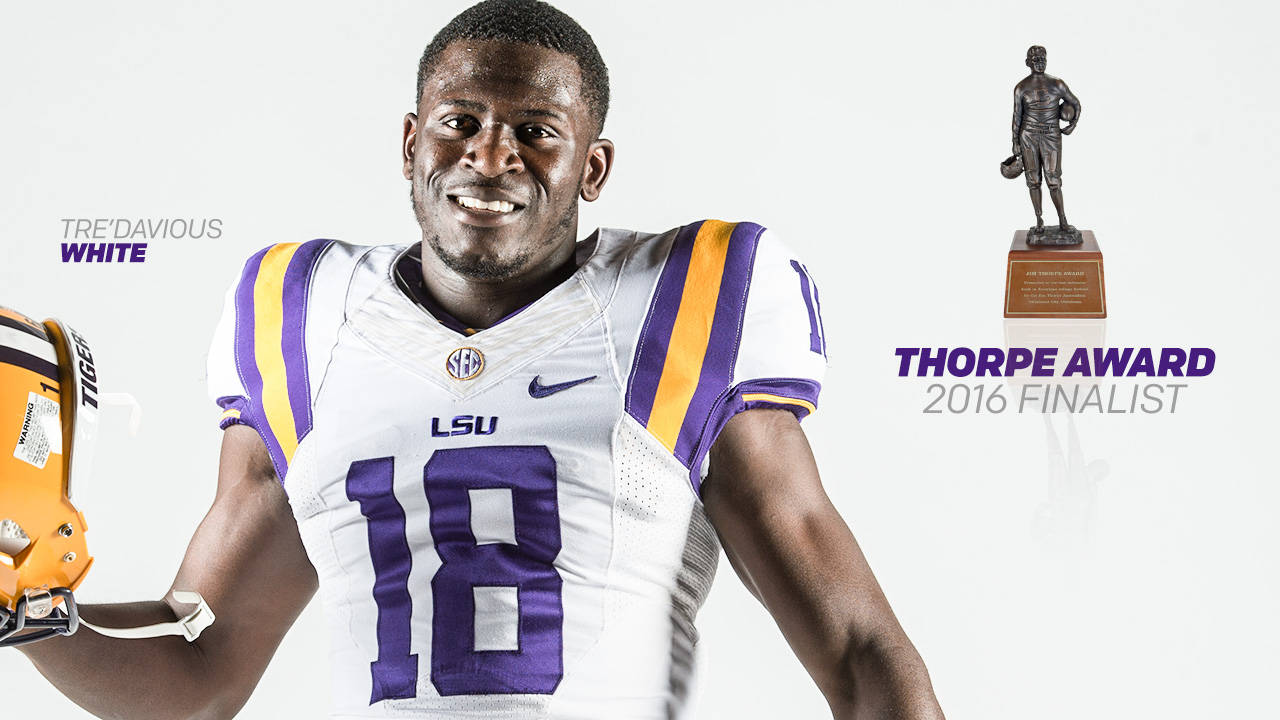 FOKLAHOMA CITY, Okla. – LSU senior cornerback Tre’Davious White has been named a finalist for the Jim Thorpe Award the organization announced Monday, which goes to the nation’s top defensive back.

Whittled down from a preseason watch list of 39 back in July, White is now one of three players still in the running for the award after the semifinalists were cut from 16 back in October. The other two finalists up for the award are USC’s Adoree’ Jackson and Michigan’s Jourdan Lewis.

Hailing from Shreveport, Louisiana, White has started all 10 games for the Tigers this season tying for the team lead with two interceptions to go along with his 28 total tackles and 3.0 tackles for loss. He’s been an integral part of the LSU defense since his debut season in 2013, starting 44 total games in his career.

Earlier this season, White became the first non-offensive player in LSU history to score touchdowns in the first two games of the season, as in the opener against Wisconsin he returned an interception 21 yards for a touchdown, while the very next week he returned a punt 60 yards for a score against Jacksonville State at home, moving into a tie for second place at LSU with three career punt return TD’s in being named the SEC Co-Special Teams Player of the Week.

White is also a finalist for the Senior CLASS Award, an award which focuses on the total student-athlete and encourages students to use their platform in athletics to make a positive impact as leaders in their communities.

White was also placed on the watch lists for the Nagurski and Bednarik awards, while being a preseason first team All-SEC selection by the coaches and media.

Twice has an LSU player claimed the Thorpe Award, with Morris Claiborne doing so in 2011 and Patrick Peterson winning the trophy in 2010.

The Thorpe Award is named after history’s greatest athlete, Jim Thorpe, and is presented by the Oklahoma Sports Hall of Fame and Jim Thorpe Association in Oklahoma City. Thorpe excelled at every sport in which he competed, including football at which he played on the offensive and defensive side of the ball.

The winner of the Thorpe Award will be announced at the live Home Depot College Football Awards Show on December 8th airing on ESPN. That player will be honored at a banquet in Oklahoma City on February 7, 2017.