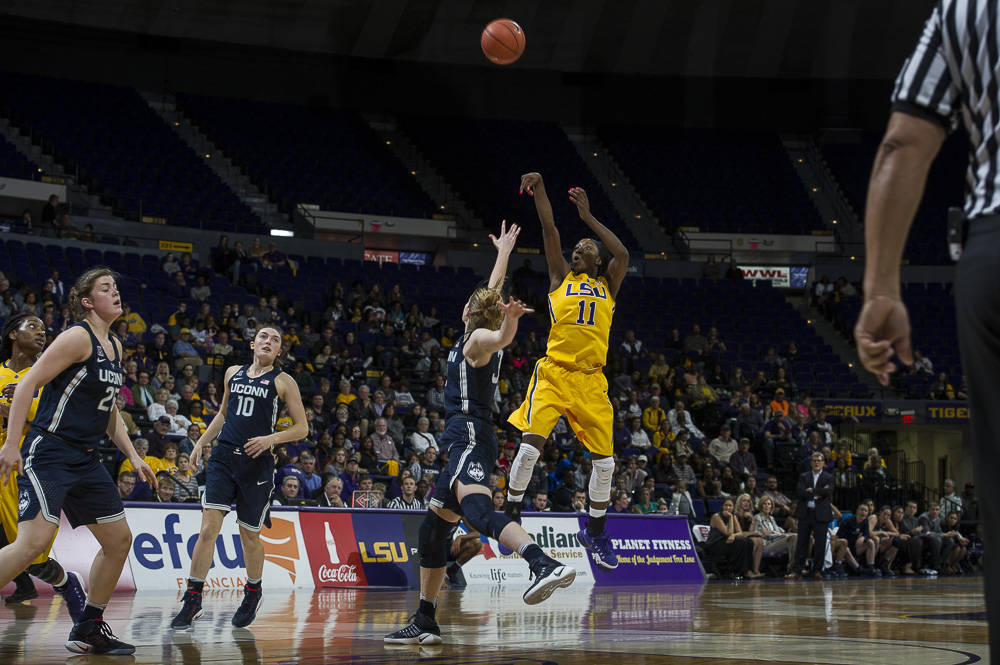 BATON ROUGE, La. — Despite a season-best performance from junior Raigyne Moncrief the LSU women’s basketball team suffered its first defeat of the season at the hands of a UConn team that shot over 50 percent from three-point range on the way to a 76-53 victory here at the Maravich Center Sunday.

Moncrief tied her season high with 15 points while adding six rebounds, three assists, a block and four steals. Moncrief scored nine of her 15 points in the third quarter.

The Lady Tigers also dominated the offensive boards, which led to a 15-8 advantage on second chance points, but simply couldn’t contest the three-point shot.

UConn’s Katie Lou Samuelson finished the game 7-of-11 from long distance on her way to a game-high 28 points to go along with eight rebounds.

LSU, on the other hand, missed all four attempts from behind the arc and couldn’t overcome a second quarter in which they were outscored 28-11.

The two teams went back and forth to start the game, with Moncrief opening the scoring and propelling the Lady Tigers to a hot start in the first quarter.

Down 18-14 at the start of the second quarter, LSU began to fall behind even further as Samuelson and Crystal Dangerfield continued to light up the scoreboard from three-point range, combining for 16 of UConn’s 28 second-quarter points.

LSU regrouped at halftime and outscored the Huskies 16-15 in the third quarter thanks to the nine points from Moncrief that offset two more three pointers from Samuelson and one from guard Kia Nurse, who finished the night 3-of-7 from deep for 15 points.

Despite being faced with a sizeable deficit to start the fourth quarter, the Lady Tigers didn’t relent on their defensive effort for one second, playing physically and limiting No. 3-ranked UConn to 15 points in the quarter.

Overall, UConn only outscored LSU 30-28 in the second half as Nikki Fargas‘ team refused to quit and continued to make plays on both offense and defense that drew roars of approval from the crowd of nearly 4,000 fans.

After playing three of their first four games at the PMAC, the Lady Tigers will head out for the Paradise Jam Tournament next week. In the tournament in St. Thomas, Virgin Islands, LSU will face UTEP, Kansas State and NC State. The Paradise Jam runs Thursday-Saturday next week.

• Starters for LSU were: Raigyne Moncrief, Chloe Jackson, Shanice Norton, Alexis Hyder and Ayana Mitchell.
• LSU has used the same starting lineup in all four games this year. Last season, with all of the injuries, LSU had used three different starting lineups in the first four games.
• Senior Rina Hill was back in the lineup today. It was her first game in uniform for the Lady Tigers this season after suffering an injury in the exhibition game. Hill has played 97 career games at LSU. Hill was held scoreless in 15 minutes of action but contributed a rebound and an assist.
• Senior Alexis Hyder extended her double-digit scoring streak to 12 games with 11 points tonight. She scored 15 points in each of the first three games of the season.
• The Lady Tigers were 22-of-63 from the field today and the 63 field goal attempts was the most since LSU attempted 63 in an 86-36 win over Texas Southern last year. LSU was 31-of-63 from the field in that game.
• Ayana Mitchell led LSU with a career-best six steals. Her previous high was two steals.
• With the loss, UConn extended its winning streak to 78 games. UConn is now 8-1 over LSU in the series history.

LSU Head Coach Nikki Fargas
“This game was definitely a great game for us to play this early on in the season. It allowed us to really look at the areas we are good at and I thought we did some good things defensively, turning over a Connecticut team with 16 steals. We did some things for three quarters that really allowed us to showcase the potential of this team. I thought at the beginning of the second quarter there was a segment there where they went on a 9-to-2 run and from there we had several opportunities to cut back into that lead, but we have to take care of the basketball. When you turn the ball over against a team like Connecticut, it turns into baskets. I am proud of these young ladies for fighting to the end and we will learn a lot from this game.”

On addressing the crowd after the game…
“Great crowd, it was a loud crowd that stayed through to the end. Hopefully they will be back. This team has a lot of fight in them and we are going to continue to add. We got Rina (Hill) back and that was great and we are going to get Tatum Neubert back eventually and that is going to make this team stronger.”

On talent level of LSU…
“I will tell you that as far as being an undersized post player, I would put (Alexis) Hyder up against anybody 1-on-1 in the country. I think she is one of the more talented and more skilled post players in our game. You can see Raigyne Moncrief get to the rack anytime she wants to. I think she is getting back to where she left off. So I will definitely highlight those two players who potentially will have a great pro career. I wish we had Faustine (Aifuwa). She is the one player on our roster that can play around the rim and we really hate that we do not have her on our roster (because of a season-ending knee injury). I really like the combination of Moncrief and Hyder and they are two difficult players to guard.”

LSU Forward Alexis Hyder
On differences from the LSU-UConn game last year …
“I felt like this is a team who wanted to win, and we were really in the game. We lost the game in the second quarter, honestly. In the second half, we were back and forth with (UConn). We just showed the growth in our team and how much progress we are going to make throughout the year.”

UConn Head Coach Geno Auriemma
“It was a hard game to watch, wasn’t it? There was a lot of stuff going on out there that makes you shake your head, but sometimes when you shoot the ball really well like we did for long stretches, it makes everything else seem okay. I’m just glad that we made a bunch of shots in that first half to give us some breathing room. We’re just glad to come down here and get a win and get on back home.”

On what he learned about his team that he didn’t know through the first three games…
“I think every game this year is going to be something different. We’re at that age where we’re not experienced enough and mature enough as a group yet to be able to be the same every night. We’re going to have the greats and the not-so-greats. Today was a struggle even though the score was what it is. It was a struggle, but we did some things and we got better in some areas and not-so much better in another area, and that’s what this is going to be all about. Every game is going to be the same.”

On why he thought his team struggled…
“Very rarely do we have more turnovers than assists. We kind of lead the country in assist-to-turnover ratio every year, and tonight was one of those nights where the ball was all over the place. The ball was flying all over the place, and it was just that kind of game. That’s uncharacteristic for us. When we play, we like to make it tough for people to score against us, and for long stretches, that’s true. Then all of a sudden, we give up a lot of layups. There are some things we take pride in and try to be really good at. We were good and then we weren’t so good. That’s why I said it wasn’t like one of those games where we start the game great, and we flow for four quarters. It was a very up and down kind of game.”

UConn Forward Katie Lou Samuelson
On her three point shooting performance…
“I think that I was shooting well and my teammates were getting me the ball, so I was going to keep shooting up threes. I think a lot of our shots today were threes, so I just tried to step up and knock them in when I could.”

UConn Guard Kia Nurse
On what it’s like when the team imposes its will during scoring runs…
“I think it always starts on the defensive end for us, and going on runs is something that has been a UConn thing for a really long time. What we did in that second quarter opening up with three, threes in a row kind of just blew that open. We understand that we have to go on runs, and it’s important to do them at different times in a game. To blow it open is something that we try and pride ourselves on.”