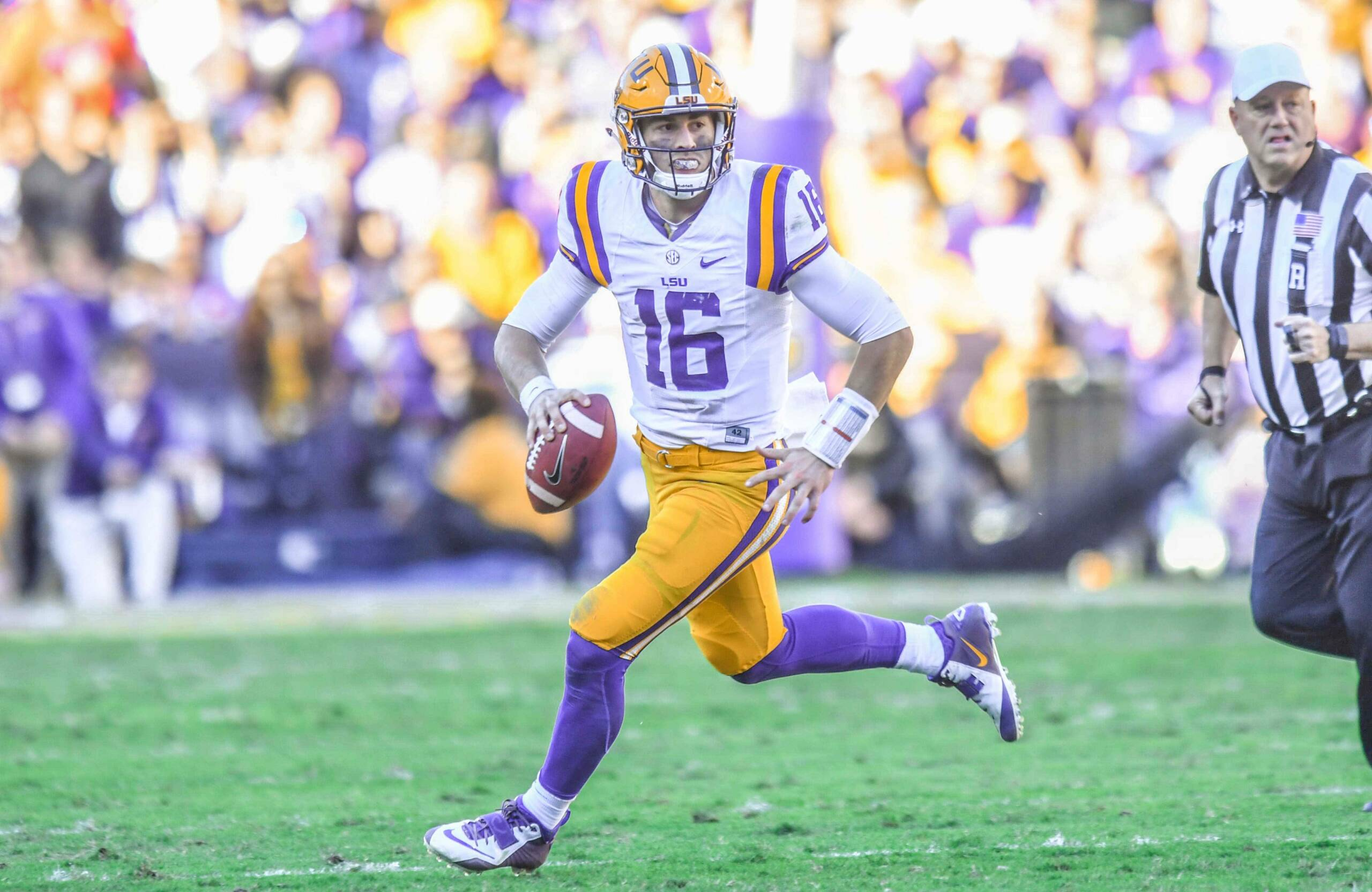 BATON ROUGE — Three failed chances in the redzone and a fumble on a kickoff return cost the LSU football team, as the No. 16-ranked Tigers lost to No. 21 Florida in the home finale, 16-10, Saturday in Tiger Stadium.

LSU (6-4, 4-3 SEC) amassed 423 yards of total offense but was 2-of-5 in the red zone including a fourth-and-goal fumble by running back Derrius Guice, who was stretching the ball toward the goal line as time expired.

Florida (8-2, 6-2 SEC) clinched the SEC Eastern Division title and will meet Alabama in the Championship Game. The Gators gained 270 yards of offense including a 98-yard touchdown pass in the third quarter.

With Leonard Fournette hobbled, LSU quarterback Danny Etling put the Tigers in position to win with a 13-play, 74-yard drive that came up a yard short of paydirt. Etling was 14-of-25 passing for 204 yards.

Fournette ran 12 times for 40 yards, while fellow Tiger running back Derrius Guice rushed 19 yards for 83 yards and a touchdown. Guice also had a fumble on first-and-goal at the Florida 7 in the second quarter.

Florida was led by running back Jordan Scarlett with 108 yards on 22 carries. Quarterback Austin Appleby was held to 7-of-17 passing for 144 yards including the 98-yard catch and run by Tyrie Cleveland that put Florida ahead 10-7.

LSU’s Colby Delahoussaye hit a 22-yard field goal to tie the game in the fourth quarter, after being robbed of a chance at a third-quarter field goal when the snap was bobbled.

Florida’s Eddy Pineiro made two fourth quarter field goals of 26 and 34 yards, the later following an LSU fumble on a kickoff.

Florida took the opening kickoff and moved across midfield, but the Tiger defense forced a punt when safety Dwayne Thomas sacked Appleby at the LSU 47 on third down.

LSU then drove 80 yards on 12 plays to paydirt, with the march culminating on a one-yard burst by running back Derrius Guice at the 2:36 mark of the first quarter. The drive was highlighted by a 29-yard pass to Guice from Etling on 2nd-and-10 at the LSU 20.

On the ensuing possession, Florida drove 39 yards on 10 plays and narrowed the deficit to 7-3 on Eddy Pineiro’s 36-yard field goal with 13:19 left in the second quarter.

LSU marched to the Florida 7-yard line with 7:34 left in the second quarter, but Gator defensive lineman Caleb Brantley forced Guice to fumble, and linebacker Kylan Johnson recovered at the 12-yard line.

The LSU defense forced a three-and-out that included linebacker Arden Key‘s 10th sack of the season, and the Tigers took possession at their own 37-yard line after a Florida punt. The Gators also recorded a three-and-out, and after LSU’s first punt of the game, Florida took over at its own 18.

Florida again failed to record a first down, and Johnny Townsend’s 55-yard punt placed the Tigers at their own 24 with 2:06 remaining in the half.

The teams traded possessions for the remainder of the half before going into the locker room with LSU holding a 7-3 advantage.

LSU drove 73 yards on the first possession of the second half all the way to the Gators’ one-yard line, but a 19-yard LSU field goal attempt by Colby Delahoussaye went awry when the snap was low to holder Josh Growden, whose pass to the end zone fell incomplete.

On the Gators’ next play, Appleby hit wide receiver Tyrie Cleveland on a 98-yard touchdown pass down the sideline to give Florida a 10-7 lead at the 8:57 mark of the third quarter.

LSU tied the game with 12:18 remaining in the fourth quarter, driving 79 yards in 12 plays to even the score at 10-10. The march was capped by a 22-yard Colby Delahoussaye field goal, giving the senior placekicker 35 career three-pointers in 39 attempts.

Florida used Scarlett to answer the score, as the sophomore ran seven times for 36 yards to the LSU 26 before Perine carried tacklers for 22 yards to the 4. On third-and-goal from the 1, Perine fumbled a poor pitch from Appleby, and Florida settled for a Pineiro field goal from 26 yards. The 15-play, 70-yard drive gave Florida a 13-10 with 4:37 remaining.

LSU’s Donte Jackson ran into a fellow Tiger and fumbled the ensuing kickoff at the LSU 21, allowing Florida to increase its advantage to 16-10 on Pineiro’s 34-yard field goal with 3:28 remaining.

On its final drive, runs of 13 yards by Etling and 14 yards by Guice moved LSU into Florida territory. On fourth-and-10 from the Florida 48, Etling kept the drive alive with a 30-yard connection to Chark who ran to the Florida 18. Another first-down pass to Malachi Dupre setup first-and-goal from the Florida 7.

Guice needed two runs to advance to the 1, but fullback J.D. Moore was stopped for no gain on third down and Guice fumbled attempting to stretch the ball to the goal line as time expired.