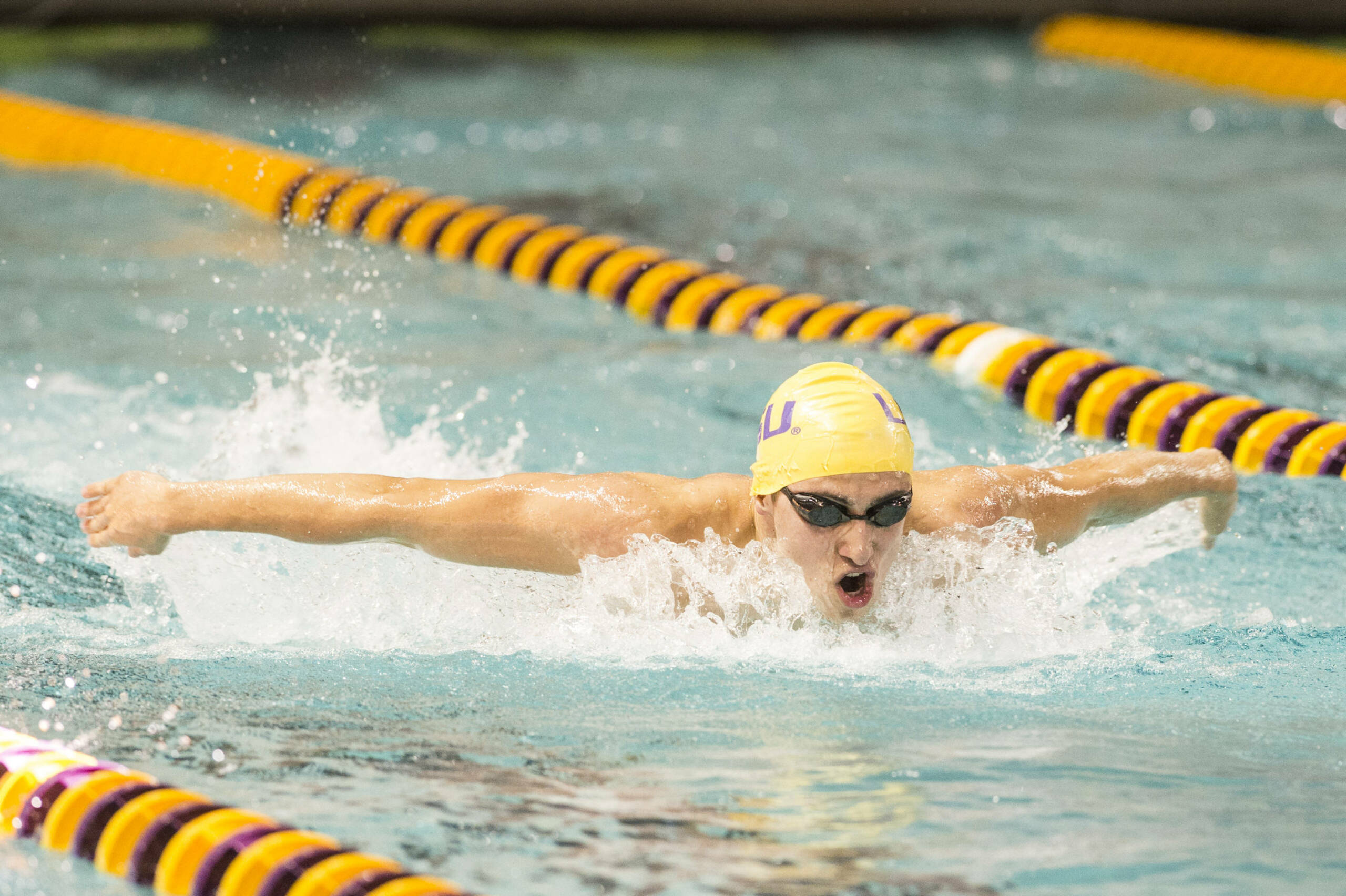 MANSFIELD, Texas- Logan Rysemus won two individual events in the 100 fly and 100 back, breaking his own school record in the 100 back with a time of 45.89 to keep the men at first-place overall on day two of the Art Adamson Invitational at the MISD Natatorium. In all, two individual and one team school records were broken on the day.

The men’s team has a five and a half point edge over Texas A&M, totaling 651 points in the overall standings. The women hold steady in second place behind Texas A&M with a point total of 477.

The team will return to action tomorrow for the final day of the invite. Preliminaries for both the men and women will start at 9:30 a.m. with finals starting at 6 p.m.

“It was great to have a day where some school records were taken down,” said head swimming coach Dave Geyer.

“Once again, there were some pieces out together today as a whole. Our freshmen are learning every time they race, and we expect to have a great session tomorrow and finish out the meet.”

In the women’s prelims, Olivia Paskulin improved her personal best in the 100 breast prelims with a time of 1:01.91, putting her at seventh on the all-time list.

During the men’s prelims, Jake Markham, who owns the all-time school record in the 200 free, bested his time in the prelims, clocking at an impressive 1:34.95. Silas Dejean grabbed a first-place finish in the 100 breaststroke, earning a personal best time of 53.21 for second on the all-time list in the event behind Andrei Tuomola.

In the championships, the women’s 200-medley relay team of Zimmer, Colleen O’Neil, Kara Kopcso and Leah Troskot placed third, coming in at 1:38.54.

Lauren Thompson garnered an eighth-place finish in the championship round of the 400 IM, finishing at 4:22.84. In the consolation round, Alexandria Ham came in second place with a time of 4:22.38.

In the 100 fly, Kopcso finished fifth with a time of 52.97. Haylee Knight came in next at sixth and posted a personal best of 53.26, improving to sixth on the all-time list.

In the 100 breaststroke, Colleen O’Neil tallied another third-place finish, earning a time of 1:00.45. Summer Spradley secured a personal best, shaving tenths of a second off her original time to mark a 1:01.33 finish, placing her at fifth overall on the all-time list.

Zimmer took sixth in the 100 back after posting a career best time of 54.69, moving up to eighth on the all-time list. In the consolation round, Andrea Galea garnered second after completing the event at 56.71.

The women wrapped up their events with the 800 free relay, as the team of Troskot, Kopcso, Dabney and Weber secured another third-place finish with a time of 7:12.98.

On the men’s side, Rysemus, Dejean, Devin McCaffrey and Karl Luht tallied a third-place finish, earning a time of 1:25.85 in the 200-medley relay, breaking the school record. The relay team of Brandon Goldman, Harry Ackland, Harrison Jones, and Tyler Harper immediately followed in fourth with a time of 1:28.73.

In the 400 IM, Alarii Levreault-Lopez secured third overall with a personal best of 3:53.52 to improve to seventh on the all-time list.

Rysemus grabbed a first-place finish in the 100 fly, completing the event in 45.98. McCaffrey followed in fifth place, tying for ninth on the all-time list at 47.47.

In the 200 free, Markham and Lewis Clough finished back-to-back in second and third. Markham finished at 1:35.11 and Clough earned a personal best in the event, posting a finish of 1:37.10 to earn eighth on the all-time list.

Dejean capped off the 100 breast, clocking at 53.36 for third overall in the event.

Rysemus earned another individual victory on the night, taking the 100 back at 45.89, besting his previous school record. Luht and Matt Klotz both completed the event with personal bests. Luht secured fourth overall in the all-time list with a time of 47.14, and Klotz moves up to eighth after swimming to a finish at 48.07.

In the final event of the day, the team of Clough, Luht, Markham and Will Arthur wrapped up the event with a 6:30.74 final time, grabbing second place to hold a slight edge over Texas A&M, 651-645.5, in the overall standings.