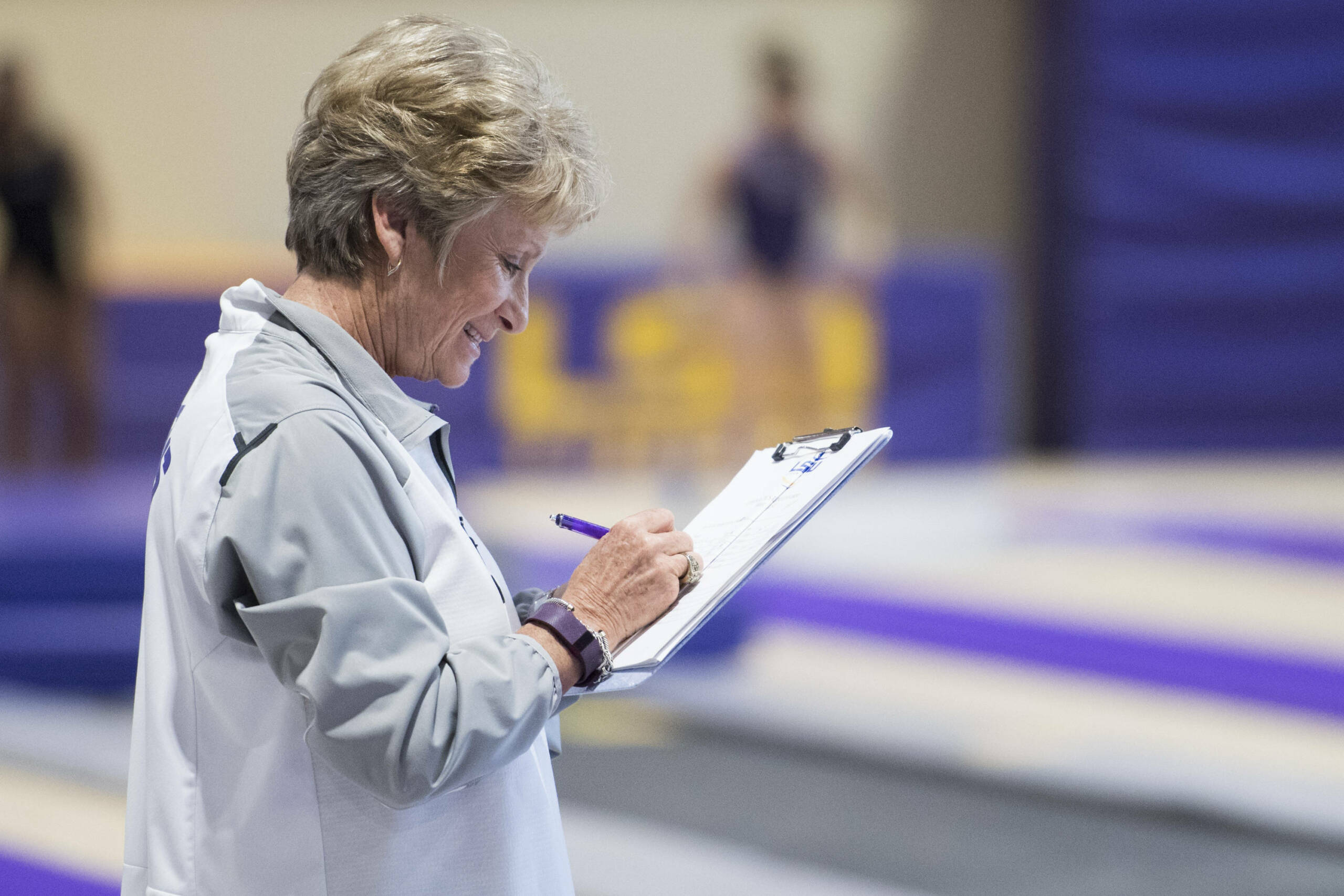 BATON ROUGE – In the final four-rotation intrasquad prior to Tiger fans descend upon the Pete Maravich Assembly Center for Gym 101 on Dec. 12, the LSU gymnastics squad split into the “Geaux” and “Tigers” teams for an intrasquad Friday afternoon at the Gymnastics Training Facility.

“We were ultimately trying to find our rhythm for Gym 101 so that we will be ready for January 6 and the opening meet against Georgia,” head coach D-D Breaux said. “We have had a tremendous response to our season tickets, and there is a lot of momentum in Baton Rouge and a lot of buzz about this team. We are really looking forward to showing Tiger fans what we have at our showcase.”

Fans are reminded that admission to Gym 101 is free and activities will begin at 6:30 p.m. The season ticket list for the 2017 season continues to fill up with more than 2,500 new season tickets requested in anticipation of the squad’s return to the Maravich Center.

Shae Zamardi, Kaitlyn Szafranski, Kylie Moran and Lauren Li were also important wildcards for both teams to total scores of 197 or better. Geaux ultimately finished with a score of 197.325 to Tigers’ 197.00

“We split them into two groups and allowed the teams to have wildcards they could draft,” Breaux said. “We wanted to create some competition and put pressure on our depth, which we definitely did. This format allowed us to break through this part of training. They really competed and worked hard to find good landings and good handstand positions. It really was a fabulous afternoon.”

“The format really allowed us to spread out today and it brought a new energy and new dynamic to an intrasquad,” Ewing said. “I think we did a really good job of cheering on both teams. To have both teams score above a 197 is amazing and really shows the depth we have.”

As the home team, Geaux started out on vault in the first rotation. Cannamela led off with a strong 9.90 for the squad. Ewing’s 9.90 along with three 9.85 scores pushed the team to a total score of 49.35.

The Tigers posted an outstanding score of 49.425 on bars to get out in front, highlighted by Zamardi’s outstanding 9.95 in the wildcard spot. In addition, Hambrick totaled a 9.90 in the second spot and Priessman came in third in the event with a 9.875.
In the second rotation, Geaux fished with a 49.35 thanks in part to Edney’s outstanding 9.95 and a 9.85 by Macadaeg. Hambrick and Priessman each totaled scores of 9.90 on Tigers to give the squad a total of 49.20 on vault.

The Geaux squad performed an outstanding beam rotation with a score of 39.425. Macadaeg continued her strong routine in the leadoff spot with a 9.95. Cannamela followed with a 9.90 and the home team counted a 9.875 by Ewing and a pair of 9.85’s to close out the rotation.

Priessman was the lone member of the Tigers’ squad to score a 9.90 or better on floor. The visitors also counted Zamardi’s 9.95 in the wildcard spot to push its total on floor to 49.325.

In the final rotation for Geaux, the team totaled a 49.20 on floor. Ewing and Gnat bookmarked the event with scores of 9.90 and also counted Zamardi’s intrasquad-high 9.95 on floor.

The season ticket request list is free to join and is available now for the upcoming season at www.LSUtix.net. All new seating will be assigned based on LSU priority point ranking as of Oct. 31, 2016.

LSU will host six home meets in the Maravich Center in 2017, starting with Southeastern Conference power Georgia. The Tigers will also take on Texas Woman’s, New Hampshire, Iowa and George Washington along with SEC foes Missouri and Florida.

LSU will offer a free preview of the 2017 team in Gymnastics 101on Monday, Dec. 12 inside the Maravich Center. Labeled a “Gymnastics Showcase,” Gymnastics 101 will provide fans a first look at the 2017 Tigers who will perform routines on all four events.