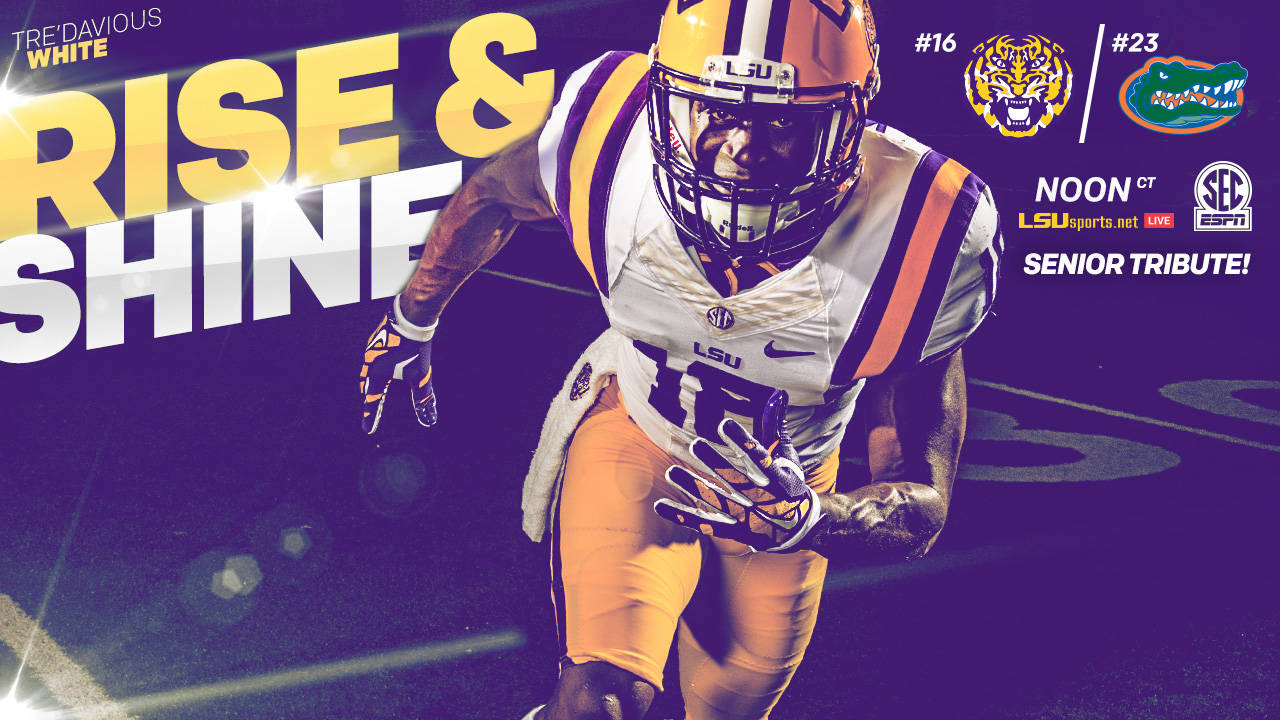 BATON ROUGE – LSU will look to continue its impressive play under Ed Orgeron and in the process hope to enhance its bowl resume on Saturday afternoon with the 16th-ranked Tigers host 23rd-ranked Florida in a rare noon kickoff here at Tiger Stadium.

The game will be televised by the SEC Network with Brent Musburger (play-by-play), Jesse Palmer (analyst) and Baton Rouge native Kaylee Hartung (sideline reporter) on the call.

The LSU-Florida game finally takes place after Hurricane Matthew forced the postponement of the game, which was originally scheduled for October 8 in Gainesville. Instead, the teams, after the cancellation of two non-conference games slated for this Saturday, will play at Tiger Stadium for the second straight year. LSU will travel to Gainesville in both 2017 and 2018.

LSU, winners of four its five games since Orgeron took over in early October, is 6-3 overall and 4-2 in Southeastern Conference play. The Tigers are coming off a dominating 38-10 win over Arkansas last week in Fayetteville. Under Orgeron, the Tigers have outscored the opposition 163-48, which includes a 90-20 difference in the second half.

Florida is one victory away from clinching the SEC Eastern Division title and a berth in the league’s championship game for the second straight year. The Gators are coming off a 20-7 win over South Carolina last week and bring a 7-2 overall mark and a 5-2 league record into the game.

LSU has won three straight and five of the last seven against Florida, which includes a 35-28 victory a year ago in Tiger Stadium. Tomorrow’s game marks the first time in the 63-game series between LSU and Florida that the teams will play consecutive years in Tiger Stadium, where the series is knotted at 16-16.

This year’s senior class has currently won 33 games, including nine over Top 25 teams; played 43 of its 48 games ranked in the Top 25; and will have played in a bowl game each year, thus extending LSU’s school-record streak to 17 consecutive years with a bowl appearance.

Top Defenses
LSU and Florida bring two of the nation’s top defenses into the game on Saturday. LSU currently stands at the only team in FBS that has yet to allow an opponent to score more than 21 points in a game this year. LSU currently ranks No.3 in the SEC in both scoring defense (13.9) and rushing defense (114.0), No. 4 in total defense (312.3) and No. 5 in pass defense (194.9).

LSU has allowed the fewest touchdowns in the FBS this year, holding opponents to only 10 TDs in the first nine games of the season. LSU has given up four rushing touchdowns and five passing touchdowns all year. Overall in 20 quarters of play under Orgeron, LSU has held opponents scoreless in 12 quarters, including the first half against Alabama and the second half against Ole Miss.

Other standouts for the Tigers include outside linebacker/defensive end Arden Key, who leads the SEC in forced fumbles (3) and is among the league leaders in sacks (9.0), tackles for loss (10.5) and quarterback hurries (8). Key is three sacks away from tying the school record of 12 which is currently held by Oliver Lawrence.

The LSU Rushing Attack
The Tigers will counter Florida’s top-rated defense with two of the top running backs in college football in Leonard Fournette and Derrius Guice. Guice (881 yards) and Fournette (803 yards) make up only the second backfield in LSU history with two 800-yard rushers.

After Guice’s 252 yards rushing last week, LSU features the only backfield in the nation with two running backs who have rushed for 250 yards or more in a game this year. Three weeks ago, Fournette broke the LSU single-game rushing record with 284 yards in the win over Ole Miss.

On Florida …
“Their offensive line is really, really blocking well. They are running the football really well. They, obviously, have a different quarterback. (Austin Appleby) manages the game well. (Wide receiver Antonio) Callaway can hit you with a deep threat at any time. Their defense is third in the nation, very strong against the run. With only 111 yards per game something is going to have to give. They are very opportunistic on defense. They are going to live in the backfield, blitz, come after the quarterback. You have to protect.”

On blocking out distractions …
“Really you could see this week with the task at hand that we had a lot of opportunities to be non-focused through other situations. They focused well. They are building on it. We used last week as an example to block out the noise, focusing on the task at hand. Now, it’s finally here, and they’re ready. I think they forgot about what happened to be honest with you. They focused in on the preparation. They understand. They’re a mature football team, and they know it’s going to be a battle.”

Fond memories that waken in our hearts a tender glow. #supermoon #lsu