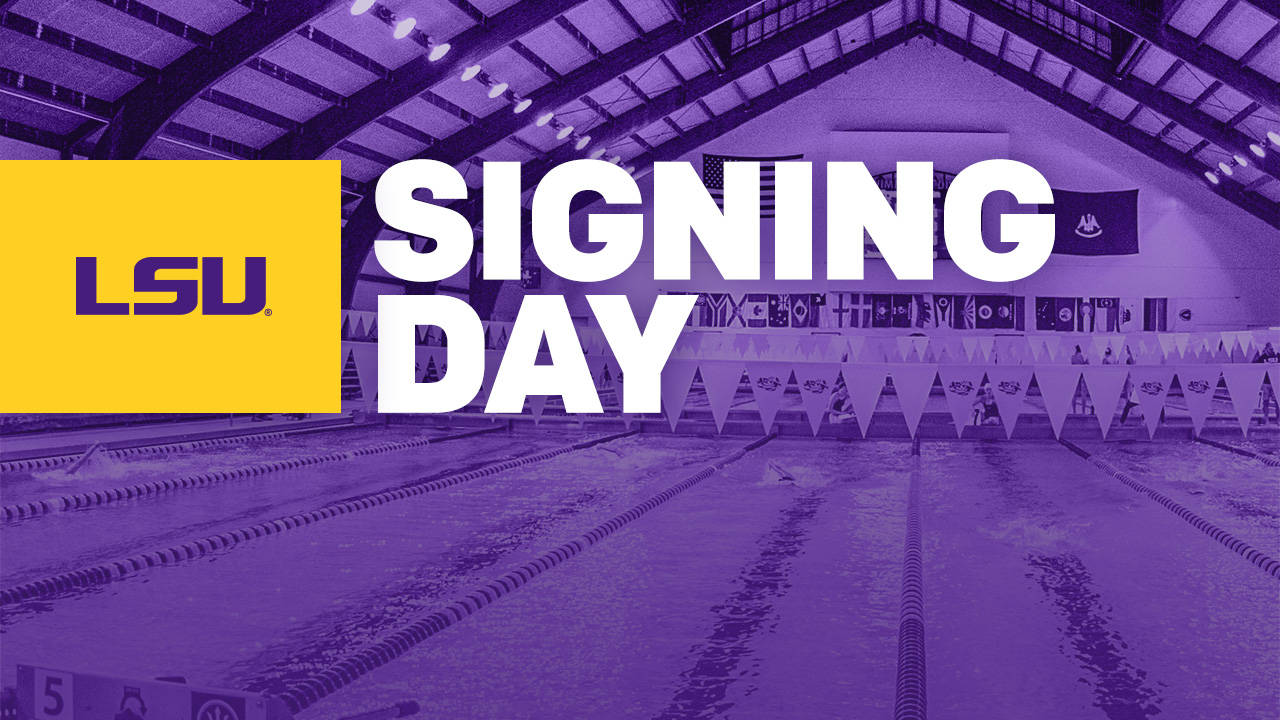 BATON ROUGE, La.- Co-head coaches Dave Geyer and Doug Shaffer announced 12 new swimmers and divers to the 2017 signing class, who will be new additions to the 2017-18 roster. The team signed 10 swimmers and two divers in the class.

“Once again, we have a very diverse signing class coming from nine different states. I think on the women’s side we definitely filled some voids that will be left from graduation this year,” said Geyer.

“I am excited about the young women we have coming in and look forward to watching their growth during their time here at LSU. From what we have seen during the recruiting process with them, there is a great deal of potential ahead of them in their collegiate swimming careers.”

“Our men’s class is a little smaller than anticipated, but we know we will have additional talent in the spring as we did this past year with the signing of Lewis (Clough), Karl (Luht) and Juan (Celaya).”

Lexi Daniels, a native of St. Louis, Missouri, swims for the Clayton Shaw Park Tideriders and earned the title of champion at the Speedo Champions Series in Columbia, Missouri, placing first in the 1500 free.

“Lexi is another commitment for us that will add some needed distance depth,” said Geyer. “Her coaches feel she has great potential in her future development and we are excited to have her be a Tiger almost as much as she is excited to be one.”

A two-time finalist in the Speedo Champions Series in Nashville, Tennessee, Raleigh Bentz tallied two, third-place finishes in the 100 and 200 back. She claimed first at the GHSA 1-5A State Swimming Championships during her junior year. Bentz also swims for the Dynamo Swim Club and is the sister of US Olympian and medalist Gunnar Bentz.

“During the recruiting process with Raleigh, it was great to hear from her club coach Jason Turcotte at Dynamo Swim Club that she was one of his ‘favorite people’”, said Geyer. “It is really exciting to be able to have commitments that not only have the ability to perform in the water but also come with great character references. Raleigh will come in and compete in the 100 fly and 100 back for us.”

Katie Smith is a 2014-2015 USA Swimming Academic All-American, holding school records in the 50 free, 100 back, and 200 medley relay. Smith was the silver medalist at the Maryland 4-5 State Championships in the 100 back her junior year. She is also the No. 10 ranked recruit in the state of Maryland per College Swimming. Her club training base is with All Star Aquatics, where she’s coached by Bob Walker.

“Katie was our first commitment this fall and is a great young woman that took a very mature approach to the recruiting process,” said Geyer. “Katie will be another one that joins a young backstroke core that we are excited to have formed this year.”
A native of Williamsville, New York, Alyssa Helak went undefeated her senior season with high school records in the 500 and 200 free, as well as the 100 back. She was also the 2016 Futures Champion in the 200 back and a USA Swimming Scholastic All-American. Helak has already been sub-17 minutes in the mile, clocking her personal best 16:50.70 at the 2016 Niagara LSC Championships. She was a finalist in the Speedo Champions Series in Buffalo, New York, placing fourth in the 200 back. She is also a member of the Victor Swim Club.

“Alyssa will come in and be able to help us out with her freestyle events and also has some backstroke to mix in as well. Her coach at Victor Swim Club in New York gave us great input on her development this summer and how they feel that will transfer into this season,” said Geyer.
“She will have an opportunity to come in and compete for spots on our 4 x 200 freestyle relay, and I think her 100’s have some great development ahead of her still. “

Kit Hanley, a relative of LSU quarterback Danny Etling, is a four-time varsity letter winner at North Central High School in Indianapolis, Indiana. Hanley is a member of the Riviera and Washington Township swim clubs. Last season, Hanley won the 200 free and placed second in the 100 free at the Indiana Girls Sectional Championships. She then went on to finish in the top 16 of both the 100 free and 200 free at the 2016 Indiana Girls State Championships.

“Our staff thinks that Kit will come in and make huge strides here at LSU coming down from the state of Indiana,” said Geyer. “When we watched her compete we saw some really positive things about her stroke and technique. She is going to come in and focus on her mid sprint freestyle events.”

From Linwood, New Jersey, Brian McGroarty helped lead Mainland Regional High Mustangs to the 2016 state championship, contributing to the Mustangs’ New Jersey state title last year with a silver medal in the 200 IM, a bronze in the 500 free, and a pair of golds in the 200 medley relay and 400 free relay. The latter relay broke the state record.

“Brian will be our third recruit from the state of New Jersey in the past two years,” said Geyer. “He had really big drops in his medley races during his junior year. We will certainly look at developing those here so he can compete at the SEC level.”

Cassie Kalisz, sister of silver medalist and U.S. Olympian Chase Kalisz, is a member of the North Baltimore Aquatic Club and also competed in the 2016 U.S. Olympic Trials.

“Cassie comes from a great program, and I am really excited to see how much she develops in her senior year with Coach Paul Yetter,” said Geyer. “She will come in and fill a void left in our 200 backstroke depth and can compete to score points at the SEC championship.”

A Louisiana native, Grace Horton is one of six Louisiana swimmers who earned USA Swimming Scholastic All-America honors. Horton was a two-time champion in the 100 free and 100 back in the Louisiana Division II Championships. In 2015, she broke the state 100 back record that had stood for more than two decades, posting a time of 57.17 in the state championships for St. Thomas More High School.

“Grace comes from a great program in City of Lafayette Aquatics. She is very raw in the sport and has a great swimming build,” said Geyer. “I was very excited to get her commitment shortly after her official visit and feel in a few years she will be opening a lot of eyes in what her improvement curve shows. She will be focusing in on her backstroke and freestyle here at LSU”

Trent Schachter is a member of the San Luis Obispo Swim Club in California. He is a two-time finalist in the California CIF Southern-Division II Sectional Championships, earning finishes of third and fifth in the 100 fly and 200 free respectively. Schachter was also named the 2016 San Luis Obispo County Boys Swimmer of the Year by the Tribune.

“Trent made some massive improvements this summer in his long course swimming. After meeting with him and his club coach we felt that those improvements will definitely transfer into his senior year in short course and into his college career,” said Geyer.

“Trent has been showing lots of development in a wide variety of events but will look at his butterfly and freestyle as being his primary focus. “

Steward is an eight-time individual conference swimming champion, earning All-State honors in the 200 IM, 100 breast, 400 free relay and 200 medley relay. He was also a top-eight finalist at the NCSA Juniors Summer Championships in the 200 breast in Indianapolis over the summer, finishing seventh in a personal best 2:23.67. Steward also competes for the Club North squad out of Kansas City, Missouri.

“Spencer is another commitment for us that could barely wait to commit after his trip. He comes from a program that has really grown over the past few years at Club North Swimming, and he has a great drop in his 200 breaststroke this summer,” said Geyer.

“Spencer will definitely be coming in to add to our depth in both breaststroke events, and we will look for some other development from him as well in his individual medley.”

For the diving team, Amber Christian and Dakota Hurbis will be the two newest additions to the diving squad who are hoping to make an impact right away.

“Amber and Dakota are terrific additions to our team,” said head diving coach Doug Shaffer. “I couldn’t be happier with their choice to be a part of LSU Swimming and Diving. They are a perfect fit with the culture of our program, and I’m excited to start working with them and see what the future brings.”

Christian, a native of the Woodlands, Texas, competed on the USA National Diving Circuit and was a Junior National finalist and Senior National Qualifier. She also placed seventh in the one-meter at the 2013-14 5-5A Texas Region Championships.

“Amber is balanced and versatile and loves diving platform,” said Shaffer. “I think she has a huge upside and has a bright future ahead of her. She is a great fit for our program and will make an immediate impact.”

Hurbis, a native of Ann Arbor, Michigan, is a state champion from Saline High, placing first in the one-meter at the Michigan Boys Division I State Championships with a score of 516.80. Hurbis is a USA Diving Junior National finalist, taking first and second in the one and three meters respectively at the 2016 Region Championships. He has also received All-American honors.

“Dakota is a well-rounded diver with a huge future ahead of him,” said Shaffer. “He is dynamic, has a great work ethic, attitude and competitive drive. Dakota will add strength and depth to our men’s squad, and he is equally talented on springboard and platform.”