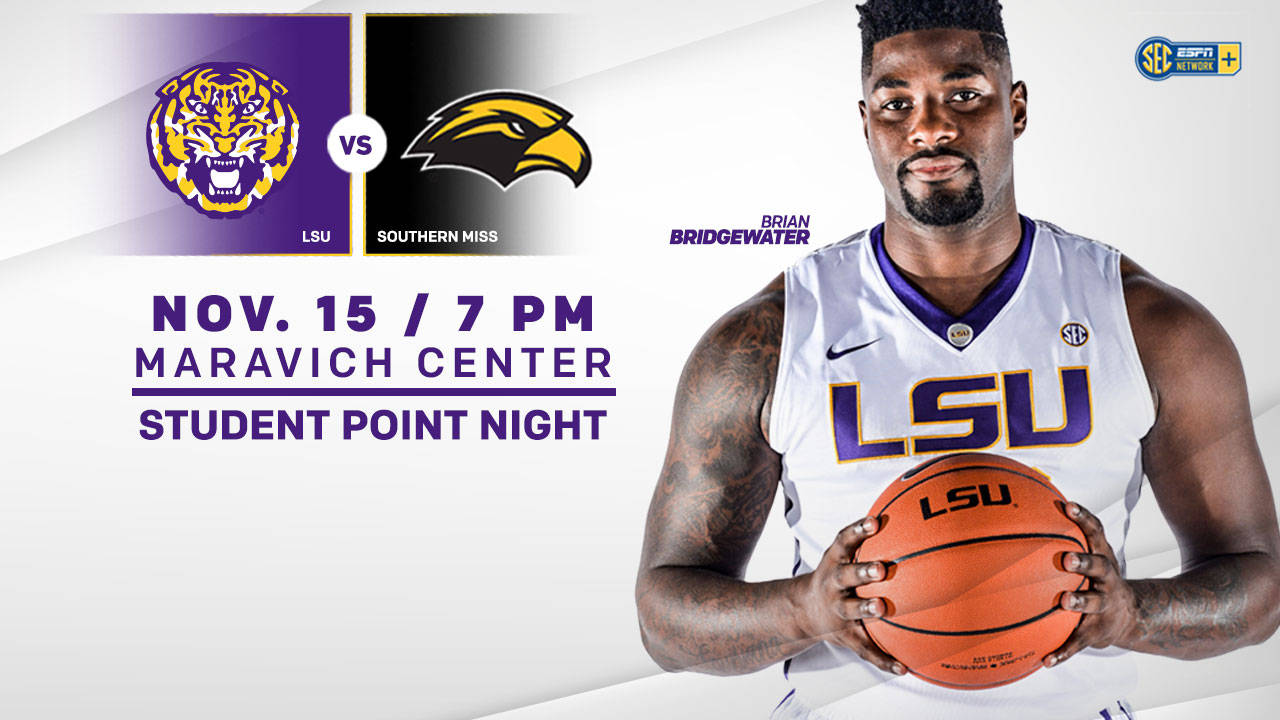 BATON ROUGE – The LSU Tigers, off a strong opening afternoon performance Saturday against Wofford, looks to start the men’s basketball season 2-0 when it hosts Southern Miss Tuesday night at 7 p.m. at the Pete Maravich Assembly Center.

Tickets are available online at www.LSUtix.net and the upper concourse ticket windows will open at 5:30 p.m. Those fans bringing a canned food item to the game will be able to receive an upper level ticket for just $2. LSU students are admitted free of charge with their LSU ID card and it is a student priority point night.

The game will be broadcast on the affiliates of the LSU Sports Radio Network (Eagle98.1 FM in Baton Rouge) with Voice of the Tigers Chris Blair and analyst Henry Hays. Blair and Hays will also be the voices on the simulcast of the game via streaming video on SEC Network+ and the WatchESPN app.

LSU will be coming off a 91-69 win versus Wofford as LSU rallied from nine points down with just under three minutes left in the first half. The Tigers would shoot 57 percent from the field in the second half while Wofford shot just 21 percent in the final 20 minutes, outscoring Wofford, 52-26.

Duop Reath earned Southeastern Conference Player of the Week honors after scoring 23 points and 14 rebounds to go with three blocks and three steals in the JC transfer’s first game with the Tigers. Aaron Epps had 17 points, Wayde Sims 13 and Antonio Blakeney and Skylar Mays 10 points each. Mays, starting at point guard as a freshman, also had six assists and no turnovers.

Southern Miss comes in 1-0 after a 101-96 double overtime win over Tougaloo on Friday. Seven players were in double figures led by Raheem Watts had 15 and three players had 14 to lead the Golden Eagles. Doc Sadler is in his third year as the coach at USM.

Coach Johnny Jones met with the media on Monday afternoon and here are some of his comments:

HEAD COACH JOHNNY JONES
Opening statement…
“I certainly have been pleased with the effort of our guys for our first game and I’m looking forward to the next challenge of Southern Miss tomorrow evening. I think our guys worked extremely hard in preparation for our first game and I think the attention was met at halftime of our first game. I’m certainly looking forward to seeing if we can build on the success of the second half of that game both offensively and defensively. I think both of those areas are important for us.

“I want to congratulate Duop Reath, he had a phenomenal offseason for us and for him to put himself in position in his first college game to be listed player of the week in our conference I think speaks volumes of the impact he’s had on our team and the impact of the work he’s put in. To see him be rewarded this early, we’re excited about that. I’m really excited about our team and we’re looking forward to our next step (Tuesday) night in a very athletic, fast, quick, high scoring team in Southern Miss.”

On how growing up in South Sudan has contributed to Duop Reath‘s work ethic…
“He’s a very driven kid and I think he’s been extremely focused even during his time here and I think that’s on and off the floor. I think his attitude is on display everyday about how grateful he is for the situation he’s in and the opportunity that has been presented to him here. I don’t think he takes anything for granted and he’s really shown up to work every day and we’re thrilled to be a part of his growth. He’s certainly embraced the opportunity he’s had here.”

On second half adjustments against Wofford…
“The way that Wofford plays they’re probably one of the tougher teams that you’re going to have an opportunity to do that with this early in the year. They’re so good and so drilled in terms of what they do offensively and in terms of their ability to execute at a high level. To try and disrupt what they were doing offensively in giving them some different looks and how we play them, I was really pleased with how our guys were able to carry that out after halftime. We wanted to start the game a certain way and the good thing is the guys didn’t get frustrated with the play of Wofford because the execution was at a high level. They made big shots and we really had to stay in the game on the offensive end rather than the defensive end in the first half. But to be able to come out and respond that way in the second half was really good and it was certainly a plus for our staff this early in the season to have a game like that against a team like that.”

On what he liked about the second half after watching tape…
“I thought defensively, having the chance to disrupt those guys and only allow them around 27 percent shooting in the second half because they are a very efficient basketball team. They are patient, they’re generally going to get the looks that they want but I thought our guys (in the first half) were able to contest some shots that went in but we weren’t discouraged by it. I thought the second half was more of the same, our guys played hard, our guys came off the bench and played hard and I think the good thing I saw in the team was that when we had to go to our bench, we didn’t have any let-up. Guys played the same way, and that’s what’s encouraging. We didn’t have any drop-off from those first five guys to the other guys coming in. When you’re able to maintain that type of play, I think it gives you a great deal of confidence to allow you to maximize the number of minutes off the bench and be able to rest those other guys knowing that those guys can hold up their end and give you a little bit of a bump with their energy they play with when they’re coming in.”

On when other teams try to stop what you do best…
“We’re hopeful that what we do in practice every day will show up in the game and I think it did the other night. We scored 91 points and our two top returning perimeter scorers returning, Antonio Blakeney and Brandon Sampson, didn’t have great shooting nights but I thought they played hard on the defensive end of the floor. I thought a lot of our execution from our other guys who made shots. That says a lot about the potential of our offense, being able to score that many points and it be spread out so much from Aaron Epps to Duop Reath to Wayde Sims to Mays and Patterson and on down the line. I think we had a balanced scoring attack, which was good for us, and I didn’t think it was a lot of forced action. Defensively we created some easy scoring opportunities because good defense led to good offense for us and it led to a lot of fast break opportunities. When we got in our sets we executed at a really good level, which is tough this early in the year against good opponents and they were a good defensive team.”

On how much the early season games set the tone for pre-conference season…
“Each game certainly brings its own challenge and its own identity. With a team like Wofford, if you know the coach and you know the system and everything they’ve done over the years, you certainly have a great deal of respect for them. Southern Miss will be no different. They’re a team that will come in and have great athletes; they’re a team that will play an up-tempo style. They’ll get after us defensively and we’re going to have to do more of the same with this group because they’re going to be tough and we’ve seen that they’re a high-scoring offensive team. We’ve got to make sure that we’re ready and they probably have a little more athleticism than the team we played the other night in Wofford.”

On maturity of young players…
“I think the offseason was good to them, they worked extremely hard and when you look at the mindset that Skylar Mays came in with and how hard he worked during the offseason on his body, on his game, in the strength and conditioning program, and on his shot as well, I think that was on display the other night. Wayde Sims has been so sound over the years. All through high school he’s been that guy that’s been extremely sound and has been a high percentage guy whether it be rebounding or scoring. The good thing about him is versatility out on the floor. Then you take a guy like Kieran Hayward with it being his first time being around this high caliber competition and for him to come in and there was no drop off at all. I thought he defended well, I thought he shot well and I thought he did a great job of taking care of the basketball for us. So the combination of guys who have never played division one basketball and then throwing Duop in there, it was exciting for us. We know we have a long ways to go but I thought it was a great start for those guys.”

On his confidence in Skylar Mays after the Wofford game…
“We’ve had scrimmages, we had the exhibition and then Wofford is a team that’s more scouting report-oriented and they know what we’re trying to accomplish. I thought Skylar did a good job being put in the position that he was to be able to make some key plays for us in the first and second halves of that game and then trying to adjust defensively to guard a high-octane scoring type of offense and the adjustments he had to make on the floor. We were pleased, but not surprised because he’s a guy that we expect a lot from and we know that he’s capable of delivering for us. He’s passionate about it and that’s the beauty of watching him grow each practice and each game and just taking it in. We know he had unbelievable basketball IQ and it’s always on display with him. When there’s something that’s not right, his disappointment is feeling like he’s letting the team down, it’s never about him.”