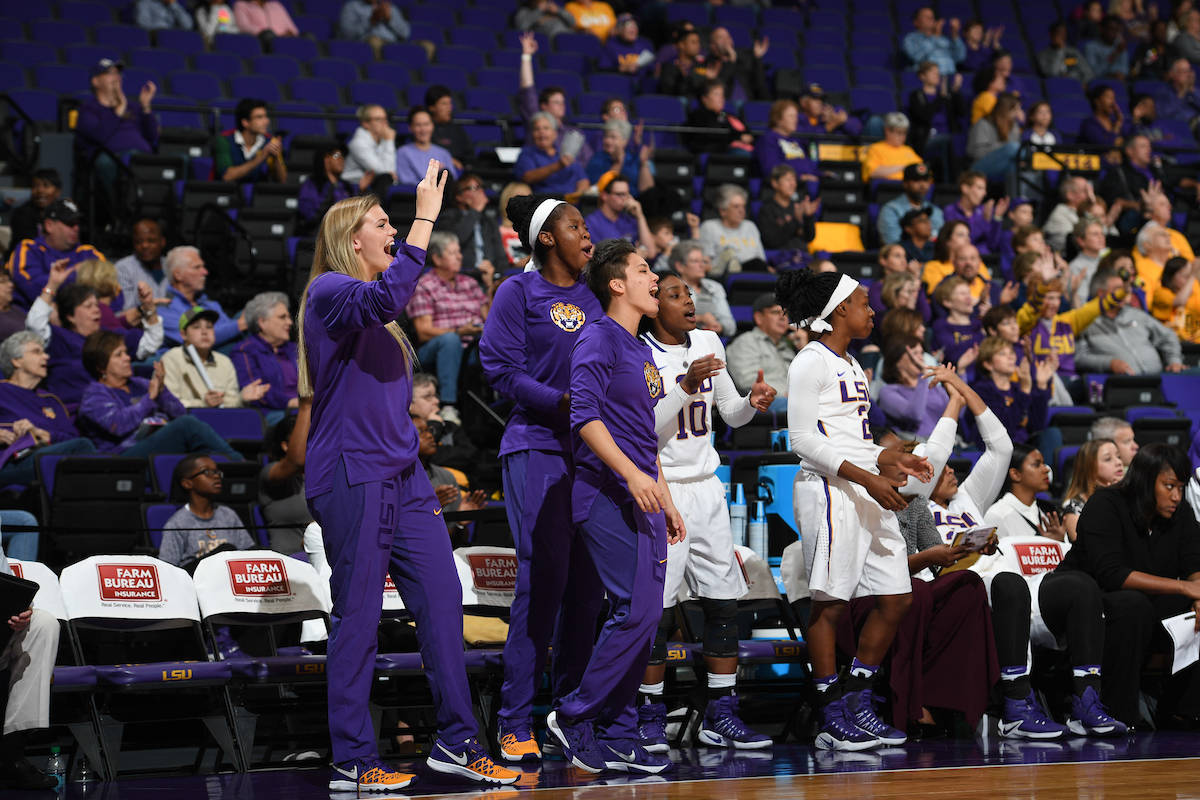 Mitchell led the team with a career-best 16 points, while also registering seven rebounds, two steals and a block. She scored 14 last year in the season opener against Wake Forest but only played two more games before being sidelined the remainder of her true freshman season with a back injury.

Hyder, who scored 15 points and hauled down 10 rebounds, extended her double-digit scoring streak to 10 games and recorded her 11th career double-double effort.

The Lady Tigers led by as much as seven midway through the second quarter, but fell behind 29-27 at the half thanks to a buzzer-beating three-pointer from Wake Forest’s Kortni Simmons.

Wake Forest’s lead grew to six points with under a minute remaining in the third quarter, but LSU fought back in a resilient fourth quarter effort in which the Lady Tigers outscored the Demon Deacons 17-10. LSU used an 8-2 run early in the fourth stanza to tie the score at 51. Hyder hit a layup with 5:34 left in the game to give LSU the 53-51 lead, an advantage they would not relinquish the remainder of the game. Wake Forest climbed back within one point with 33 seconds left before Jackson’s free throws put the game out of reach.

Freshman Jaelyn Richard-Harris had a huge impact on the game off the bench, scoring all four of her points in the beginning of the fourth quarter, including the layup that tied the game at 51-51 with 6:49 left to play. Richard-Harris’ defense also played a significant role as she recorded a team-high four steals on the night.

Amber Campbell led Wake Forest with 16 points, followed by Alex Sharp, who chipped in 12 points. Sharp and Kortni Simmons led the Demon Deacons on the boards with seven rebounds apiece. Wake Forest held the rebound advantage for the game, 36-32. Twenty-seven of LSU’s 36 rebounds were defensive boards.

The Lady Tigers have two big games next week with a Wednesday evening showdown with Rice University at 7 p.m., and a rematch with defending National Champion UCONN on Sunday. The LSU-UCONN game will be carried on ESPN and tipoff is set for 4:30 pm.

• Starters for LSU were: Raigyne Moncrief, Chloe Jackson, Shanice Norton, Alexis Hyder and Ayana Mitchell.
• Senior Rina Hill did not play in tonight’s game because of a hip injury she suffered in the exhibition game. She also missed Friday’s season opener versus LA Tech. These are the first two games she has missed in a career that spans 96 games.
• Redshirt freshman Ayana Mitchell set a career high with 16 points tonight. She scored 14 points in the season opener against Wake Forest last year. She played two more games in 2015-16 before being sidelined the remainder of the season with a back injury.
• Senior Alexis Hyder extended her double-digit scoring streak to 10 games with 15 points tonight. She also pulled down 10 rebounds for her 11th career double-double effort.
• For the second-straight game, LSU had three players in double figures scoring.
• The Lady Tigers are now 2-1 in the series history over Wake Forest. LSU is 2-0 in games played at the PMAC.
• The Lady Tigers have opened the season at 2-0 for the first time since the 2013-14 season.
• LSU is now 16-2 all-time in home openers that are not the season opener.
• Head coach Nikki Fargas is now 49-26 in games against non-SEC foes in her six seasons at LSU.

LSU Head Coach Nikki Fargas
“Coach (Tasha) Butts brought it to my attention that this was the same score last year when we played at Wake Forest. We’re on the winning side of that score, and that’s a positive. A lot of credit to Wake Forest for coming in and really playing with a high level of intensity both offensively and defensively. They had an opportunity and a good look at the end to tie the game and potentially send it into overtime. A position that we don’t necessarily want to be in, but I give our kids a lot of credit too for hanging tough. We were down one period of the game and defensively we had to play Jaelyn Richard-Harris. Her intensity and tenacity, being the smallest player on the floor, sparked us to really finish out the game.”

Wake Forest Head Coach Jen Hoover
“I was disappointed in the outcome because I really felt like it was our game. I thought it was going to be a great game. I think we’re two teams trying to prove we’re NCAA Tournament teams. Give Nikki (Fargas) and LSU a lot of credit. I don’t think either team kind of folded. It was a close game back and forth, and they got the lead when they needed to. Offensive boards were concerning for us; we gave up way too many second-chance points. I’m really proud of our kids trying to make plays. We even got a good look at the last second, and that’s all I can ask for as a coach.”