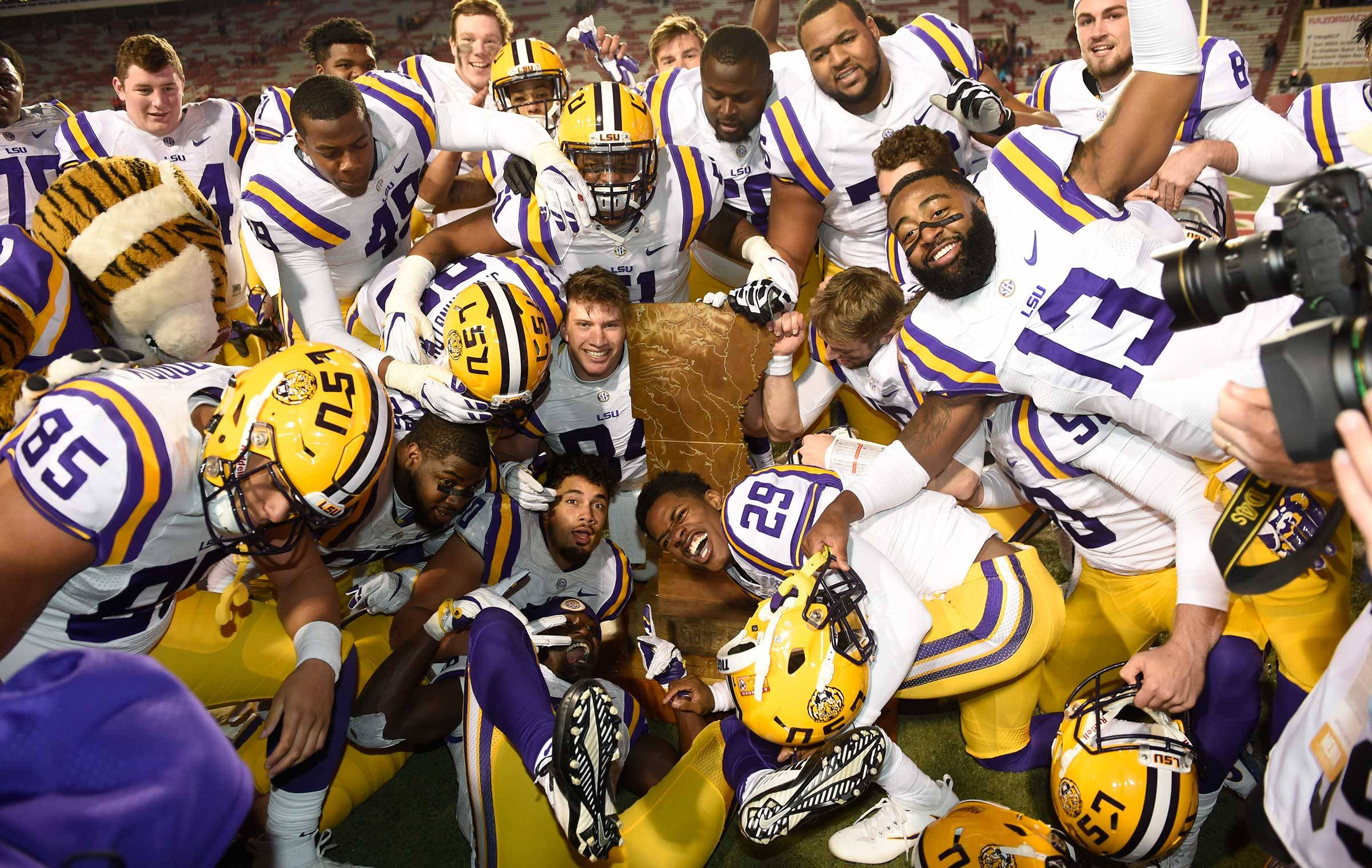 Fournette scored twice as the Tigers built a 21-0 lead in the first 20 minutes of play and never looked back. The junior ran 17 times for 98 yards with touchdown runs of 5, 7 and 3 yards.

Guice, a sophomore from Baton Rouge, ran for 219 of his 252 rushing yards in the second half. Highlighting the effort was the longest play from scrimmage in LSU history: a 96-yard touchdown run in the fourth quarter that put an exclaimation point on a 390-yard rushing tally.

The Tigers defense continued to shine, allowing only 81 rushing yards with three sacks in the first half. Linebacker Donnie Alexander‘s interception setup an LSU touchdown and Dwayne Thomas‘ pick off kept Arkansas out of the endzone. LSU’s Kendell Beckwith also recovered a fumble in the endzone.

LSU has allowed only 10 touchdowns in nine games this season.

Arkansas was led by quarterback Austin Allen, who was 15-of-31 passing for 210 yards with a 44-yard touchdown and two interceptions.

LSU won the coin toss and deferred its decision until the second half. The Tigers kicked off and quickly forced Allen and the Razorbacks off the field with a 5-yard sack by Arden Key and pressure by Duke Riley on third and long.

The Tigers took advantage of the defense’s fast start, as Etling caught the Hogs blitzing with a quick whip to Fournette for 38 yards to the Arkansas 15. Three plays later, Fournette scampered into the endzone for a 5-yard touchdown and a 7-0 lead with 8:58 remaining in the first quarter.

A 20-yard catch by tight end Jeremy Sprinkle gave Arkansas a first down at its 40, however, linebacker Tashawn Bower was able to pressure Allen into an poor pass on third-and-1, leading to a punt.

Fournette gained 11 yards with a run along the left sideline and LSU advanced to midfield following a personal foul. Lost yardage on an end-around stalled the drive and Josh Growden‘s punt rolled into the endzone.

Two plays into the Hogs’ drive, Donnie Alexander dropped into coverage on second-and-10 to earn his first career interception. He returned Allen’s pass 14 yards to the Arkansas 18.

Two Fournette runs gave LSU first-and-goal from the Arkansas 7 when the quarter ended.

After switching ends, LSU faked a jet sweep and instead handed off to Fournette to rumbled up the middle for a 7-yard touchdown. His second TD of the game put LSU ahead 14-0 with 14:54 left in the half.

Beckwith came up with a bone-crushing pass breakup on third-and-4 to again send Arkansas off the field after three plays. Though Fournette left the game following a tackle behind the line, Etling completed passes of 15 yards to Travin Dural and 48 yards to a streaking Dupre at the Arkansas 15.

A hard-nosed run of 12 yards by Guice setup first-and-goal at the 3. Guice was rewarded with another try, and this time he carried an Arkansas defender on his back into the endzone.

The Razorbacks were able to answer, making their first forey into LSU territory with 9:40 remaining in the half. An over-the-top pass by Allen to wide receiver Dominique Reed for a 44-yard touchdown pass accounted for more than half of Arkansas’ first-half passing yards (81).

Following three-straight drives that ended in punts, Arkansas ended the half at its 13-yard line.

The start of the second half wasn’t ideal for LSU, as a holding penalty and a fumble by Fournette at the LSU 28 gave the Razorbacks a short field.

On third-and-goal from the 6, Key fell into coverage and nearly intercepted a pass intended for Keon Hatcher in the endzone. Adam McFain kicked a 24-yard field goal and Arkansas trailed 21-10 with 10:32 left in the third quarter.

Despite a holding penalty on the second snap, LSU put together a decisive seven-play, 81-yard touchdown drive by using its rushing game.

A 17-yard run by Fournette on second-and-19 setup a 38-yard run by Guice on third-and-short. Elting faked a dive to the fullback and flipped to the running back in stride for a first down at the Arkansas 35. Guice got 15 more on the ground before Etling was hit out of bounds. The personal foul led to Fournette’s second-and-goal touchdown from the Arkansas 3.

With that last carry, @_fournette now has 40 career rushing touchdowns, tying him with Charles Alexander for third all-time. pic.twitter.com/LiCRMj18Ds

Guice carried the load on the long drive, rushing eight times for 67 yards before being held a yard short of paydirt on third and goal from the 3.

Arkansas looked to be in business following a 54-yard screen on first-down. However, from the LSU 18, Dwayne Thomas stepped in front of Allen’s pass toward the right corner of the endzone and earned the second interception of his career.

Guice then turned in the longest play from scrimmage – a 96-yard run along the left sideline – to put the Tigers up 38-10 with 6:04 to play.

Arkansas looked to add a touchdown in the closing minutes but fumbled into the endzone where Beckwith recovered.

Fans are reminded to use the South Alabama game ticket and parking passes for this Nov. 19 game against the Gators.

It will be Senior Day for the LSU football team, as these Tigers will be honored on the field in a pregame ceremony.

Bebe, the boys and The Boot! 🏆