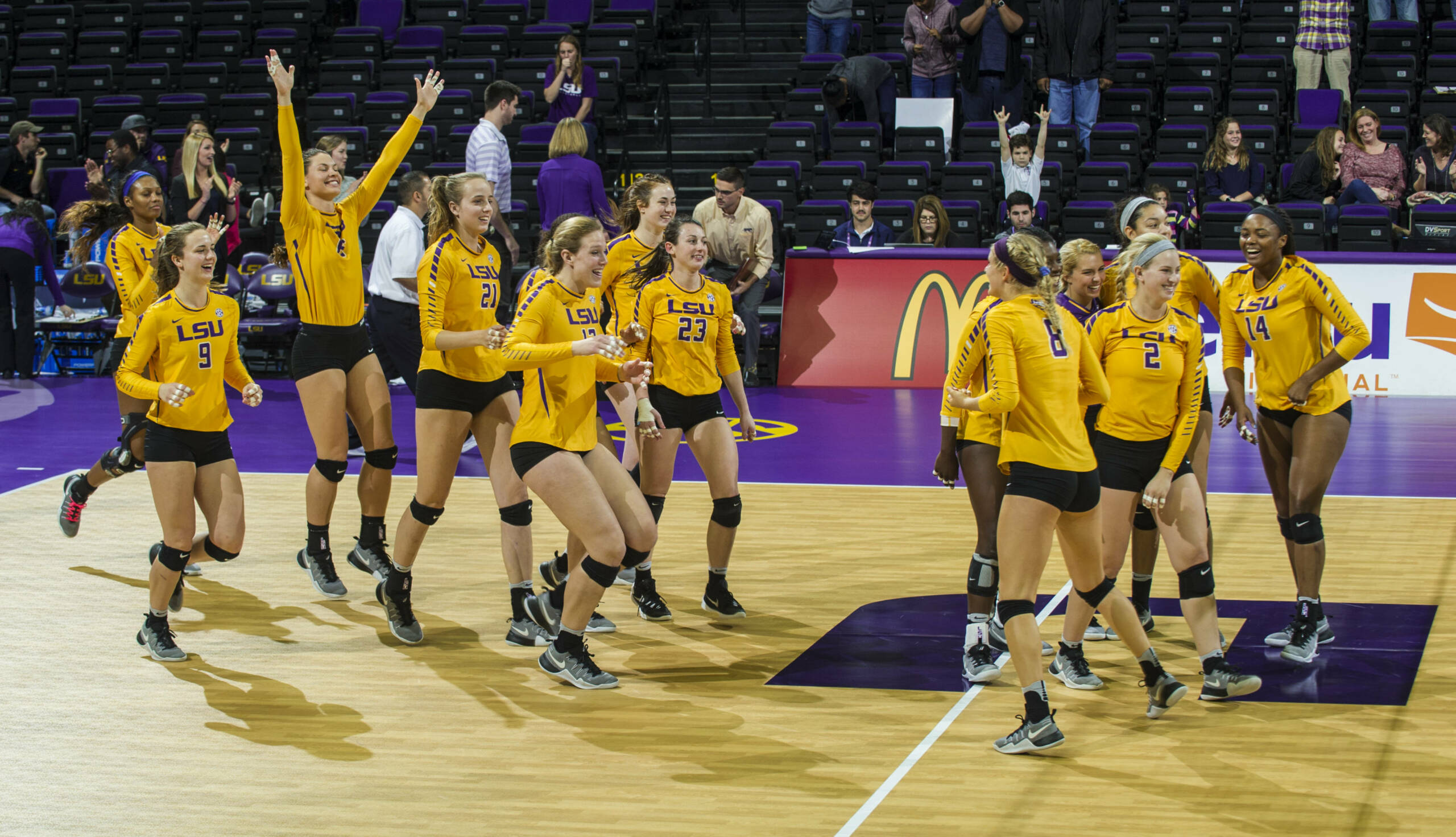 BATON ROUGE – Down 15-11 in the fourth set with Georgia in control of the set and match, the LSU volleyball team fired off a 10-2 run to take the momentum and capture its first win inside of the Maravich Center in 2016, 3-2, Friday night.

Flory’s Thoughts
“I am so happy for our kids tonight,” head coach Fran Flory said. “They haven’t been able to get over the hump and they were finally able to do it tonight. I know they are relieved and happy. There in the fourth set I kept telling them that if they got it to five then they would win.”

“Olivia (Beyer) came alive there in the fourth set and Anna (Zwiebel) found her to give us the boost of energy and momentum swing. We were able to really hold the momentum there for the first time in the match. We were then able to finish it off and win.”

What’s Next
LSU returns to the Maravich Center at 1 p.m. CT Sunday to take on Mississippi State. The match will be streamed live on SECNEtwork+ through WatchESPN.com and the app. Sunday afternoon is Girl Scouts day at the Maravich Center. All GSLE members ages 5-12 are welcome to participate in a pre-match poster making activity and a post-match serving activity. Girl Scouts must be registered for the event in advance. The first 500 fans will also receive an LSU Volleyball Pillow Case.

Opening Set
The Tigers opened with their second-straight opening set win. The LSU offense hit a strong .318 with 18 attacks and just three unforced errors. In her first start of the season at setter, Lindsay Flory started out strong with 14 assists for the offense. Flory helped Gina Tillis to a set-best six kills for the squad. The two teams went back and forth in the opening set with nine tie scores and three lead changes. After LSU took a 19-18 lead, the home team closed out the first set to win 25-22.

Second Set
The Bulldogs bounced back to win their first set in two matches with a .355 hitting percentage on 14 kills. The UGA defense collected four blocks in the set, including two in the final four points. Gibson led the way for LSU in the set with six kills and the home team totaled 11 digs in the set. After the Tigers led by as many as four points, Georgia fought back to tie the set at 21. UGA was able to win the final four points to tie the match at one.

Third Set
LSU held the lead in the majority of the third frame and led by as many as six points. After Flory challenged successfully to push the lead to 17-11, the Bulldogs went on a 9-3 run to tie the set at 20. LSU closed the set to as close as one point two separate times but UGA ultimately took the 2-1 lead. Georgia had a strong defensive set with four blocks and a total of 18 digs.

Fourth Set
The two sides went back and forth early in the set but UGA took the momentum and led 15-11 at the media timeout. Out of the timeout, LSU went on a 10-2 run sparked in part by freshman Anna Zwiebel who had a pair of service aces within a five-point run by the Tigers. After not accounting for a block through three sets, Olivia Beyer and Jariel Tureaud totaled five and four block assists respectively to help leads LSU to six team blocks.

Final Set
UGA and LSU were tied at four early on in the decisive set the Tigers went on a 6-0 run to take a 10-4 lead. After the Tigers extended the lead to 13-7 they were able to fend off a late run by Georgia to take the match. LSU put away 11 balls in the set compared to UGA’s four.

Match Notes
>> Gibson finished with 18 kills for a career high on 39 attempts for a .385 hitting percentage in the middle. The senior accounted for a quarter of LSU’s points in the match.

>> Tillis’ 18 kills were the Texas native’s second-best performance in conference play this season. Paired up with 12 digs, Tillis captured her 10th double-double of the season.

>> Sophomore middle blocker Olivia Beyer reached double-digit kills for the first time in her career with a career-best 13 kills in the match. On the defensive end, Beyer also tallied five blocks to tie for her best performance.

>> Freshman Sydney Mukes had a strong performance off the bench with eight kills and four digs.

>> Kelly Quinn led the way for the defense with 20 digs on the night.

>> Cheyenne Wood provided a strong performance with 12 digs. Katie Kampen also reached double-digit digs (11) for just one spot off of her career best.

>> The Tigers improved to 36-21 in matches over Georgia. LSU has now won five straight over UGA.

>> This season, LSU is 5-2 when winning the first set, 3-2 in five sets and won its second match of the season after trailing 2-1.

>> Georgia out-blocked LSU, 13-8, but the Tigers were still able to earn the victory.