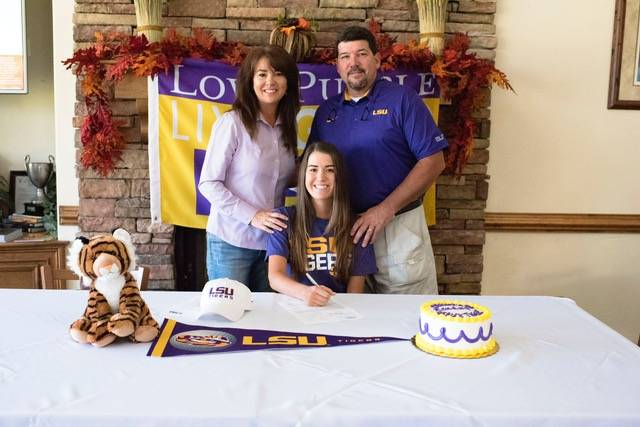 BATON ROUGE – The LSU Athletics Department and women’s golf coach Karen Bahnsen announced on Friday that the National Letter-of-Intent papers have been received on Kendall Griffin of Sebring, Florida.

Kendall, who is homeschooled through the A Beka Academy College Prep, has had a good 2016 winning the championship of the Florida High School Athletic Association Class 2A State Tournament with rounds of 72-68. She reached the quarterfinals of the USGA Girls’ Junior event when she beat 15th-seed Jing Wen Lu of the People’s Republic of China, 3 and 2, in the Round of 16 this summer.

In extreme winds and cold conditions in Ft. Lauderdale, Griffin won the 84th Ione D. Jones/Doherty’s Women’s Amateur Championship with a 4-and-2 victory over Julia Matzat of Parkland, Fla.

In 2015 Griffin teamed with partner Athena Yang to finish as medalist in the USGA Women’s Amateur Four Ball with rounds of 66-67. She was part of a state runner-up as a member of Team Florida and tied for 15th in the 2015 USGA Girls Junior in stroke play with rounds of 72-69.

“We are excited to have Kendall join our program,” said LSU Women’s Golf Head Coach Karen Bahnsen. “She brings an incredible work ethic and great competitive nature that will blend in perfectly with our team. We welcome Kendall and her family to our LSU Family!”

Griffin was named a 2016 AJGA Rolex All-America and multiple MVP of the Sebring Varsity Girls Golf Team. She has a low round of 66 (-6) shot on the Sertoma Junior Tour at the Sebring Golf Club and a low AJGA 54-hole total of 2-under 211 (71-70-70) at the Wynstone Golf and Country Club in Georgia.