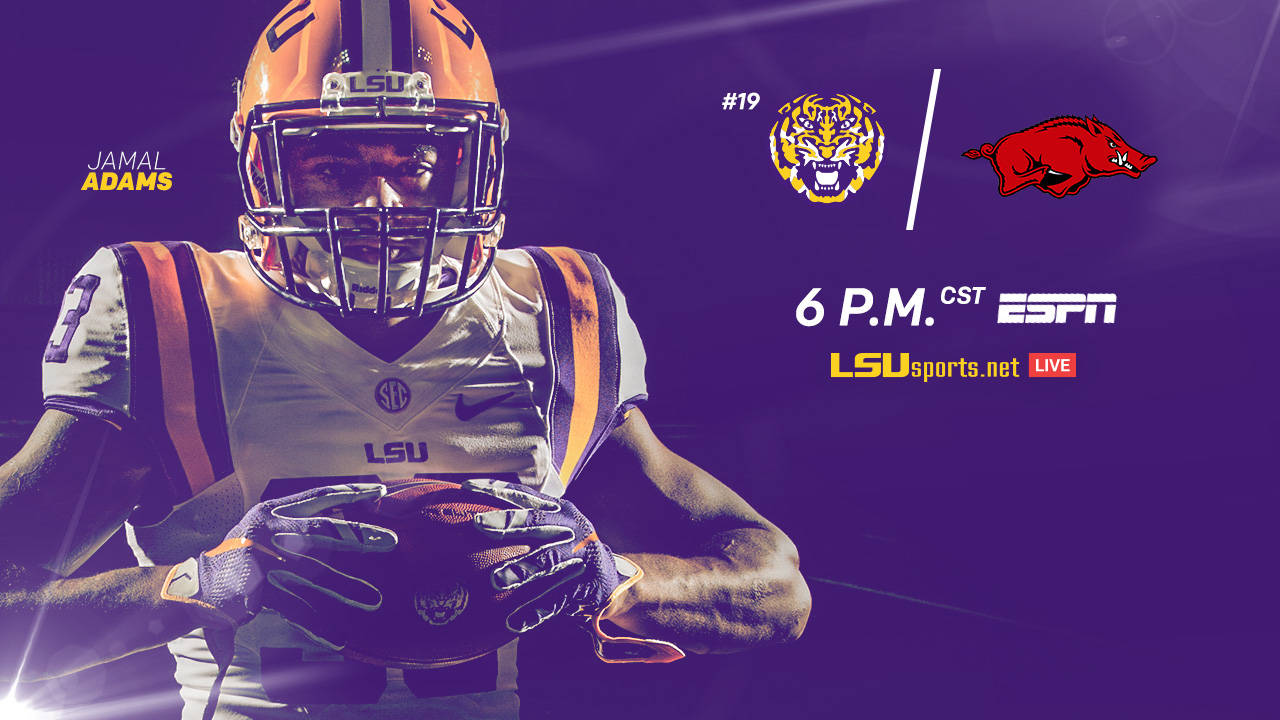 FAYETTEVILLE – LSU will play its first road game under head coach Ed Orgeron when the 24th-ranked Tigers look to reclaim “The Boot” when they face 25th-ranked Arkansas at 6 p.m. here Saturday at Razorback Stadium.

ESPN will televise the game with Dave Pasch (play-by-play), Greg McElroy (analyst) and Tom Luginbill (sideline reporter) on the call.

The Tigers, who are coming off a hard-fought 10-0 loss to top-ranked Alabama last week, will be playing their first road game since the Auburn contest on Sept.24. The 49-day span between road games is the longest for LSU since 1941 when the Tigers went 56 days between away games.

LSU goes into Saturday with a 5-3 overall mark, which includes a 3-2 record in Southeastern Conference action. LSU is 3-1 under Orgeron, who took over following the 18-13 loss to Auburn. Under Orgeron, LSU has outscored its opponents 73-17 in the second half.

The Razorbacks, under head coach Bret Bielema, are coming off their best performance of the season, dominating 11th-ranked Florida, 31-10, last week. Arkansas is 6-3 overall and 2-3 in league play.

Saturday’s contest will be just the fourth meeting between the Tigers and Razorbacks in Fayetteville with the Hogs holding a 1-2 mark in those games. Overall, LSU leads the series 37-22-2, but the Razorbacks have won the last two meetings, including a 31-14 decision last year in Tiger Stadium.

“Battle for the Boot”
This will be the 21st straight year that LSU and Arkansas will battle for “The Boot”, a 24-karat golf trophy molded in the shape of the states of Arkansas and Louisiana. LSU has won the beat 12 times, but Arkansas currently has possession of the trophy after back-to-back wins in 2014 and 2015.

That Stingy LSU Defense
LSU’s defense has improved with each contest and the Tigers played their best game of the season last week against Alabama, holding the Crimson Tide to season lows for points (10), total yards (323) and passing yards (107). LSU also held Alabama scoreless for nearly 47 minutes as the Tigers became the first team to shutout the Crimson Tide in the first half since 2007 (Florida State).

In eight games, LSU’s defense has yielded opponents to only nine touchdowns, which is the fewest in the nation. LSU is also the only team in the FBS that has given up more than 21 points in a game this year. The Tigers are allowing 14.4 points per game, which ranks No. 6 in the nation, and only once this season has an opponent scored touchdowns on consecutive possessions (Mississippi State).

LSU’s Defensive Standouts
Senior linebacker Kendell Beckwith leads the SEC in tackles per game with a 10.6 average. In eight games, Beckwith has registered 85 tackles and is coming off a career-high 16-tackle effort last week against Alabama. Fellow senior linebacker Duke Riley had 13 tackles in the win over Ole Miss and is second on the team with 68 tackles. Defensive end/outside linebacker Arden Key is third in the SEC in sacks (8.0) and ninth in the league in tackles for loss with 9.5.

Fournette, who missed three of LSU’s first six games, leads the Tigers with 705 rushing yards and five touchdowns. He’s joined in the backfield by sophomore Derrius Guice, who has rushed for 629 yards and a team-best seven touchdowns.

Junior Danny Etling will make his sixth LSU start at quarterback on Saturday as he’s guided the Tigers to a 3-2 mark thus far. Etling has completed 100-of-

171 passes for 1,221 yards, seven touchdowns and four interceptions this season.

What To Look For In Arkansas
The Razorback offense features one of the top quarterbacks in the SEC in Austin Allen, who ranks third in the league in passing with 254.6 yards per game. Allen has thrown for 19 touchdowns and eight interceptions in guiding as Razorback offense that is averaging 30.9 points and 422.2 total yards per game (167.3 rushing, 254.9 passing).

Razorback running back Rawleigh Williams is second in the SEC in rushing with 955 yards, an average of 106.1 yards per game.

What Coach “O” Said
“Our week of practice has been tremendous, we had a great mindset. On “competition” Tuesday we put in some new plays, and I think they’ll work out for us. Wednesday, I thought our offense had an outstanding practice. Danny (Etling) looked sharp, and the receivers were catching the ball. (Thursday), we went out there and everything felt good. We talked about us traveling and it being a business trip. We have a lot to play for, we have a good football team. We’re facing a good football team. It’s a great SEC rivalry, we’ll be ready to go.”

His thoughts on Arkansas having the possibility of winning three times in a row against LSU…
“You can talk about all that stuff, but when it comes to game time, it doesn’t matter what happened last year. Is it extra motivation for us? Yes, it is, but it will all come down to fundamentals and execution. Us going on the road and handling the crowd noise, we have to take care of the football and be very efficient on offense. We need to continue playing dominant on defense.”

On if the energy in practice this week is what he wanted…
“We focused, starting with the meeting on Tuesday, about having great energy. They gave it to us. The coaching staff on Wednesday gave us great energy, and the players fed off of it. I thought it was one of our best weeks of practice.”

On what he feels Arkansas did differently defensively against Florida compared to when they played Auburn…
“They got bigger. They moved some guys around up front. They wanted to get bigger and stouter, and obviously with their open date, they worked really hard. I think they worked extra hard on defending the run.”

On his plan given that Arkansas is first nationally in time of possession…
“Third down becomes huge. Third down on defense, we have to be able to get off of the field. In those third and ones or third and twos become crucial in the ball game. They obviously want to keep the drive alive, and we have to stop them. On offense we have to convert on third down. If you look at third down, it all comes down to what you do on first down. If you’re successful on first down, you have a chance to move the chains. If you’re behind the chains on first down, it makes it difficult.”

On if he feels anything different being that it’s his first road game coaching LSU…
“Excitement. I’m excited to get on the plane with this team. I’m excited to be the head coach at LSU. I’m going to a place where I was a graduate assistant making $25 every two weeks, and I was happy to get the check. It’s an SEC game. I get excited when it’s a big game and you’re going to someone else’s stadium. With that challenge, the competitor comes out in you.”