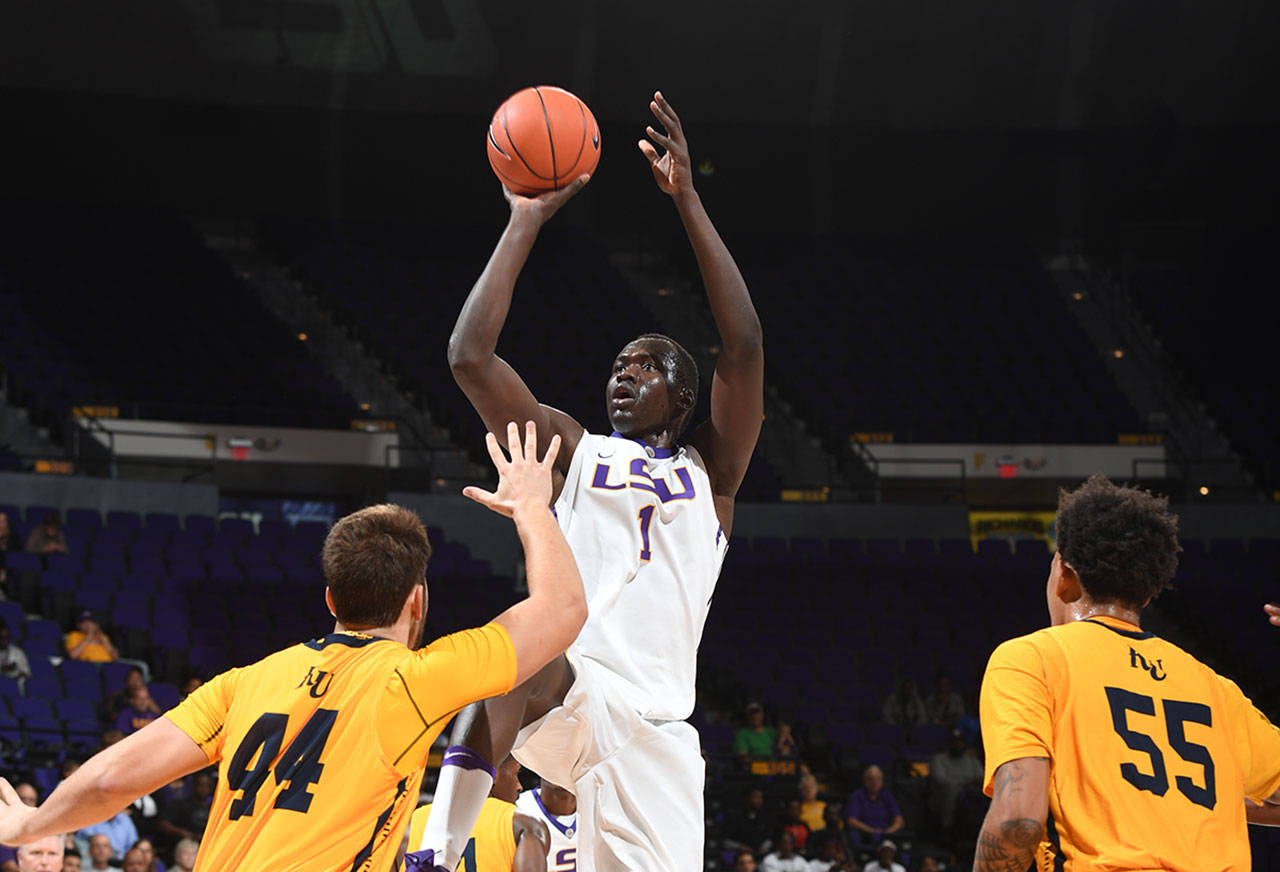 BATON ROUGE – Thirty practices over the last 42 days are completed.

A closed scrimmage against another school and a 113-80 win over Reinhardt University in an exhibition game are in the book.

Now it gets real in a hurry for Coach Johnny Jones and the LSU men’s basketball team. Like the 350-plus Division I men’s basketball teams this weekend, the Tigers open the 2016-17 season Saturday afternoon at 1 p.m. at the Pete Maravich Assembly Center against the Wofford Terriers of the Southern Conference.

Tickets for the game are available through Saturday morning at LSUtix.net and at the upper concourse ticket windows of the Maravich Center beginning when gates open at 11:30 a.m. Tickets start at $5 and children 2 and under are admitted free of charge. LSU students are also admitted to the game at no charge with their valid student ID cards.

Because of football pre-game activities, the LSU Sports Network radio broadcast will only be available over the air on Guaranty Broadcasting affiliates 100.7 FM The Tiger and free anywhere at LSUsports.net/live. Patrick Wright and Henry Hays will be on the call and their call will also simulcast on the video broadcast streaming at SEC Network+ and WatchESPN.com.

LSU comes into the game off a performance Monday in the exhibition that showed the Tigers were able to lock down the smaller Reinhardt team inside the lane, but the Eagles then took to the 3-point mark and made 13-of-27 treys. LSU had 23 assists for its 46 baskets but turned ball over 21 times.

While it is expected the juniors Jalyn Patterson and Elbert Robinson III will dress Saturday afternoon, if LSU goes with the same starting five as in the exhibition game it will be the freshman Mays opening at the point with sophomores Blakeney and Samson at the other two guards. Reath would then start at one forward position along with junior Aaron Epps, who had seven points but 12 rebounds in a game LSU had a 59-30 advantage on the boards.

Wofford was 11-7 last year in the Southern Conference finishing in a tie for third under veteran coach Mike Young who enters his 15th year as the head coach and his 28th in the program. They are expected to be led by last year’s SoCon Freshman of the Year, Fletcher Magee who averaged 13.8 points a year ago.

The Terriers are selected third in their conference pre-season polls.

For LSU this is the first of three games in seven days at the Maravich Center as the Tigers take on Southern Miss on Tuesday night at 7 p.m. (Student Point Night, $2 admission with a canned food item) and Friday night (Nov. 18) at 7 p.m. LSU will host North Florida.

For updates during and after the game check out @LSUBasketball on Twitter and www.Facebook.com/LSUBasketball.

“… We look forward to getting the season started on Saturday against a gameful team in Wofford who we have a great deal of respect for. They’re a team that has played exceptionally well over the years; they knocked off North Carolina State just a year or two ago. I’ve also had the privilege of being on the bench against them as an assistant coach before in a very challenging game. They run a great system. They’re extremely patient, they have experienced shooters on their team and they’re a team that defensively you certainly have to be in tune and it’s a tough game for us out of the gate because of the experience that they have on their team and offensively it’s not something that we face on a daily basis so we’re certainly going to have to make sure that we’re keyed in and playing extremely hard to make sure that we can stay in contact with one of their shooters on the perimeter and just really the system that they run.

“But it’s exciting for us because it’s a great challenge and certainly one that we look forward to and welcome. Craig (Victor II) again will not be with us. We will have Jalyn Patterson back in uniform for us on Saturday along with Elbert Robinson III. So we look forward to those guys getting back and getting in the flow of things that we’re doing out there on the floor and we’re hopeful that being back with us will help us in terms of our depth as well.”

On Wofford’s three-point shooting…
“(Fletcher) Magee is a tremendous shooter and we’re very familiar with his ability. Last game I thought we did a very great job of defending inside the line, holding the opponent to 27 percent shooting from the field inside the line. If we’re playing that well inside the line and a team gets going offensively we’re going to have to try to run them off the three-point line and that’s somewhere where we’ll have to make adjustments with Magee and the type of shooter he is. He’s very capable from the three-point line shooting about 47 or 48 percent from there and he’s a guy that we look for. He’s a guy who’s really good at reading the screens. He understands and knows how to play. He can put it on the deck as well and get to the rim so we’ll certainly have to mix up our coverages on him and give him different looks to hopefully keep him off balance.”

On the test of playing Wofford…
“Absolutely, (Wofford) are better 3 point shooting team than the team (Reinhardt) we played the other night. In fact, they had a four or five man hitting us with threes the other night and this kid is a guard. Their post guys can do a great job in terms of picking and popping and the way that they run their offense and the way they read and play off of what you do defensively; whether you’re switching and whatever your coverage is, they’re patient enough to take advantage of it and they’ve got guys that are capable and they know their roles. So we’ll have to make sure that we’re really locked in and again that’s a tough challenge this early in the season against a team that’s probably fine-tuned because that’s the way they play year in and year out. They have several guys returning from last year’s team that they count on.”

On intensity defending the perimeter…
“I thought (LSU) played hard enough to guard guys inside the line holding them to 27 percent. I think some of the shots those guys took the other night were challenged and they went in. Others, we didn’t get to, they got some open looks off the break. They knocked down 13 of them; I think they had 8 of them in the first half. I think when the score was where it was in the first and then late in the second half we were able to empty our bench and they didn’t stop shooting. They still knocked shots down. I think we certainly are very capable of guarding those guys so we’re not overly concerned about that game and the way that those guys shot and where they were taking their shots. They were low percentage shots that just happened to go in and I think if you’re playing the percentages you’d much rather them taking those shots and not scoring inside the line like most teams will to try and beat you.”

On Jalyn Patterson‘s injury…
“Jalyn has been a full go. He just had to sit the other day because of injury precautionary reasons for him. But he’s been playing with us and has gotten a lot of reps and we expect Jalyn to play a lot of quality minutes for us. Skylar (Mays) I thought wound up doing a good job for us the other day but we had to back him up with Marshall Graves who has walked on for us. We thought Marshall did a really good job. But that’s an area that we’re hopeful that Jalyn and Skylar will get a lot of those minutes and those two guys may find themselves together on the floor together at times because Jalyn is really a good defensive player for us and depending on what matchups or assignments we may have to have for him to use him in multiple ways out there on the floor.”

On Duop Reath and Elbert Robinson playing together…
“I think there’s a chance because Duop has the ability to step out on the floor. He can play a power forward role because he can shoot it, put it on the deck, he’s a good passer from out there, and he can defend out on the perimeter as well. So there can be some instances where we see those guys in there together as well. I’m just not sure how many minutes we can stretch Elbert right now. We’re hopeful that he can rest Duop in some situations until he becomes full speed as well. So there may be some areas that we can get Duop off the floor because we don’t want to extend him too many minutes. When he’s fresh I think you have an opportunity to see how hard that he plays and we don’t want to take that away from him if we can find him some rest time.”

On the point guard position…
“I think both of those guys are different in terms of the way that they play. I think Skylar did a good job up until this point. Jalyn is an experienced player but he hasn’t played the point for us. Here he has generally played off the ball for us. He has point guard skills and we’re going to have to utilize those skills for us this year because we lost both of the guys that played maximum minutes for us — Josh Gray and Tim Quarterman last year. We would look for Mays and Patterson to man that spot and we’ve been very comfortable with the way that they’ve competed with each other during this offseason leading up until now. So I think it is a great situation to have because of the ability that both of those guys have.”

On 23 turnovers acceptable vs. Reinhardt…
“Absolutely not. That number of turnovers doesn’t add up, especially when that team makes 13 threes. You get 20 something turnovers like that against a team that can score you can put yourself in trouble. I think the way we play, as fast we play, 9 to 10 turnovers or something in that area we feel like we can manage if we’re playing that way and still give ourselves a great opportunity to win. But you get your numbers up there around 20 you’re putting yourself in a threatening situation because good teams are going to take advantage and score off those extra opportunities that you give them.”

On Duop Reath‘s performance…
“ … I thought he was pleased that his effectiveness on both ends of the floor … He did a great job of running plays down there and he had four blocks on the night, two of them he had to run down because guys were beaten off the bounce and I thought he did a good job of recovering and getting to the basket and defending it. I think on the offensive end the guys got the ball in there to him and were patient enough to get it to him and the plays he made; I thought he was comfortable with that as well. He’s got a lot to offer, and he didn’t need to show it as much in that game but he can really stretch out. I think he’s going to be one of those guys that will be a fan favorite because of the way he plays and the energy he provides to our team.”