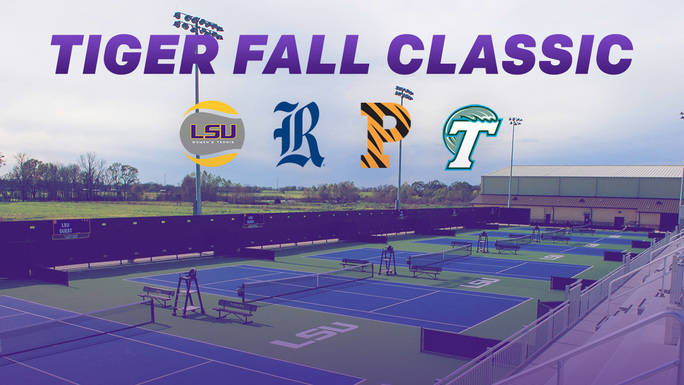 The LSU Tiger Fall Classic, which will also feature players from Rice, Princeton and Tulane, is the first fall invitational that the women’s tennis team has hosted since the completion of the LSU Tennis Complex last fall.

“We are looking forward to hosting these three teams at our beautiful new facility and wrapping up our fall season in a dual match format to get us ready for the spring,” said co-head coach Julia Sell.

LSU has plenty of experience against Tulane over the years, with their most recent victory coming in a 7-0 sweep last season in which seniors Joana Valle Costa, Skylar Holloway and Abby Owens each earned singles victories. Junior Ryann Foster also has experience against the Tulane, defeating Naz Karagoz at the ITA Southern Regional in October.

Foster and Valle Costa also collected singles victories in a 5-2 win over Rice last season and combined for a doubles victory against the Owls.

Day 2 of the invitational begins Saturday at 9 a.m. when LSU takes on Tulane in doubles followed by doubles against Princeton and finally singles against Rice.

The third and final day of the invite will see the Lady Tigers compete against Tulane in singles competition, also beginning Sunday at 9 a.m.

Courts open to the public an hour prior to competition and admission is free. In the event of inclement weather, LSU will play its matches first in the indoor facility.

Princeton vs. LSU
Rice vs. Tulane

Princeton vs. LSU
Rice vs. Tulane

Rice vs. LSU
Princeton vs. Tulane