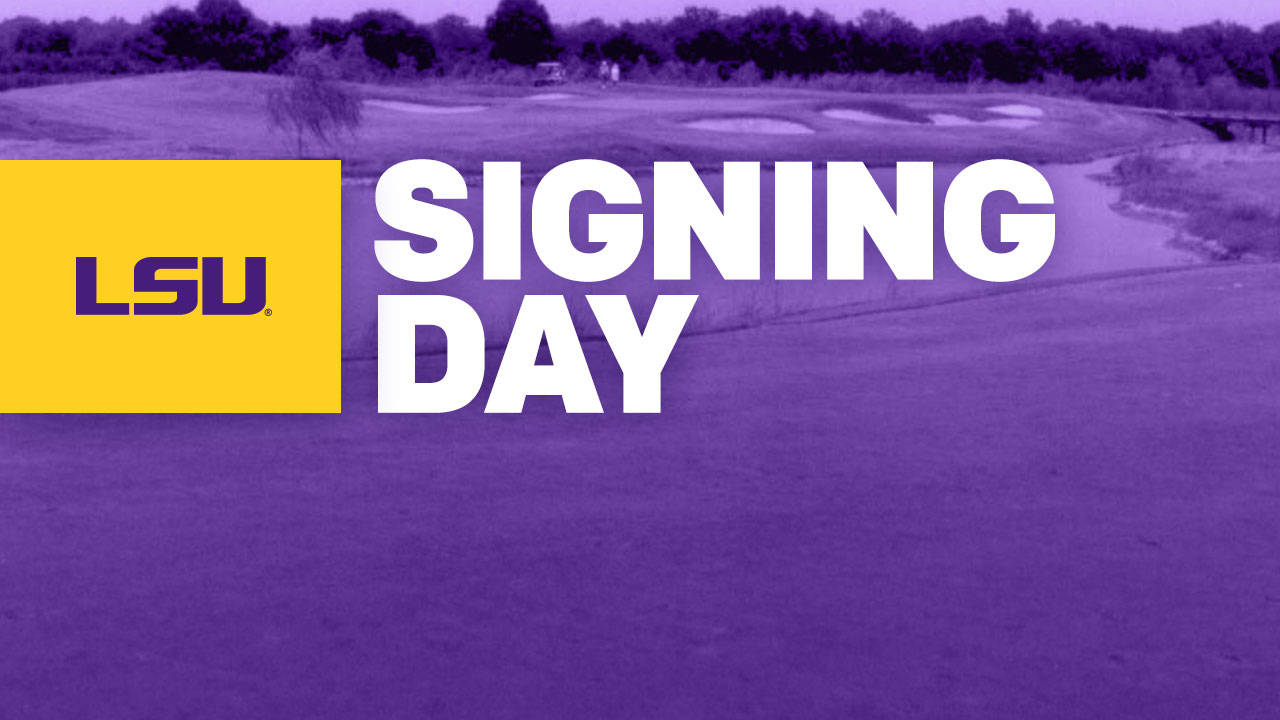 BATON ROUGE – As American citizens took to the polls Tuesday to shape the landscape of their country for the next four years on Election Day, the LSU Men’s Golf program did the same on National Signing Day on Wednesday by signing three of the nation’s top recruits in the Class of 2017 to National Letters of Intent.

Head coach Chuck Winstead did not even have to leave the state of Louisiana to lock up arguably the top-ranked recruiting class nationally as three top-20 national recruits in Shreveport’s Philip Barbaree, Slidell’s Jacob Bergeron and Baton Rouge’s Trey Winstead elected to sign with LSU.

The 2015 NCAA Champions continue to stockpile elite talent as their Class of 2017 joins a roster that already features five players that ranked among the nation’s Top 20 recruits in their signing periods.

“I am excited about these three men joining our program,” Chuck Winstead said of those signed in this year’s class. “They are exactly the type of individuals we’ll look for to represent LSU and our men’s golf program. I believe each one of them will represent LSU in a first-class way both on and off the course.”

In Barbaree, the Tigers will soon welcome arguably the No. 1 prep recruit in the country in this year’s signing class as the C.E. Byrd High School product was crowned the United States Junior Amateur Champion and also the American Junior Golf Association Rolex Junior Player of the Year during his breakout sophomore season in 2015.

It marks the second time in three years in which the Tigers have signed an in-state recruit that has been ranked No. 1 nationwide after also inking now sophomore All-American Sam Burns in their Class of 2015.

“Philip has enjoyed as decorated a junior career as anyone who has ever signed with LSU,” Winstead said of LSU’s latest recruit from Shreveport. “I look forward to his continued growth and feel he will make an impact on our program from the moment he steps on campus.”

Bergeron emerged as one of the elite junior golfers in the country during an outstanding 2016 season in which he was honored as an AJGA Second-Team Rolex Junior All-American while ranking as high as No. 11 across the country in the Class of 2017 in the latest AJGA Polo Junior Golf Rankings. He also ranks No. 12 by Golfweek and No. 14 by the National Junior Golf Scoreboard among the nation’s top recruits this year.

Bergeron’s 2016 season is highlighted by six top-10 finishes in AJGA events, including a tie for fifth place at The Junior PLAYERS Championship presented by TaylorMade-adidas Golf at Sawgrass Country Club and picking up a runner-up finish at the AJGA David Toms Foundation Shreveport Junior. He also won the 2016 Trusted Source Big “I” National Championship in Sacramento, California, with a record score of 18-under par.

While Barbaree captured the nation’s most prestigious junior title at the 2015 U.S. Junior Amateur Championship, Bergeron also competed in the event held at Colleton River Plantation in Bluffton, South Carolina.

“Jacob is very gifted as was evidenced by his breakout summer,” Winstead said. “I believe he has the talent to have a very bright future at LSU and am excited that he is joining our program.”

Winstead is an AJGA Second-Team Rolex Junior All-American in his own right as the nation’s No. 12-ranked player in the Class of 2017 in the Polo Junior Golf Rankings. He was among the contenders in AJGA majors this season while earning a third-place finish at The Junior PLAYERS Championship and tying for seventh place at the Rolex Tournament of Champions. It marked the second-straight season in which Winstead claimed a Top 10 finish at the Rolex Tournament of Champions after also tying for 10th place in 2015.

Winstead won his first career AJGA title during the 2014 season at the AJGA Junior at Southwind presented by True Temper where he fired a winning score of 1-under par 212 in the 54-hole championship.

Also a standout in the high school ranks while playing for University High School in Baton Rouge, Winstead captured back-to-back Division III individual state championships as a sophomore in 2015 and junior in 2016 and helped guide the Cubs to the team crown this past season. He defended his title at the 2016 Sugar Bowl LHSAA State Golf Championships with a winning score of 4-under par.

“It’s obviously a unique situation to have the opportunity to coach your son,” said LSU’s head coach on his son joining the program. “Trey is a tough competitor and has exhibited the type of play on difficult golf courses that should translate to a successful career as a Tiger. I look forward to the impact he can make on our golf program at LSU.”