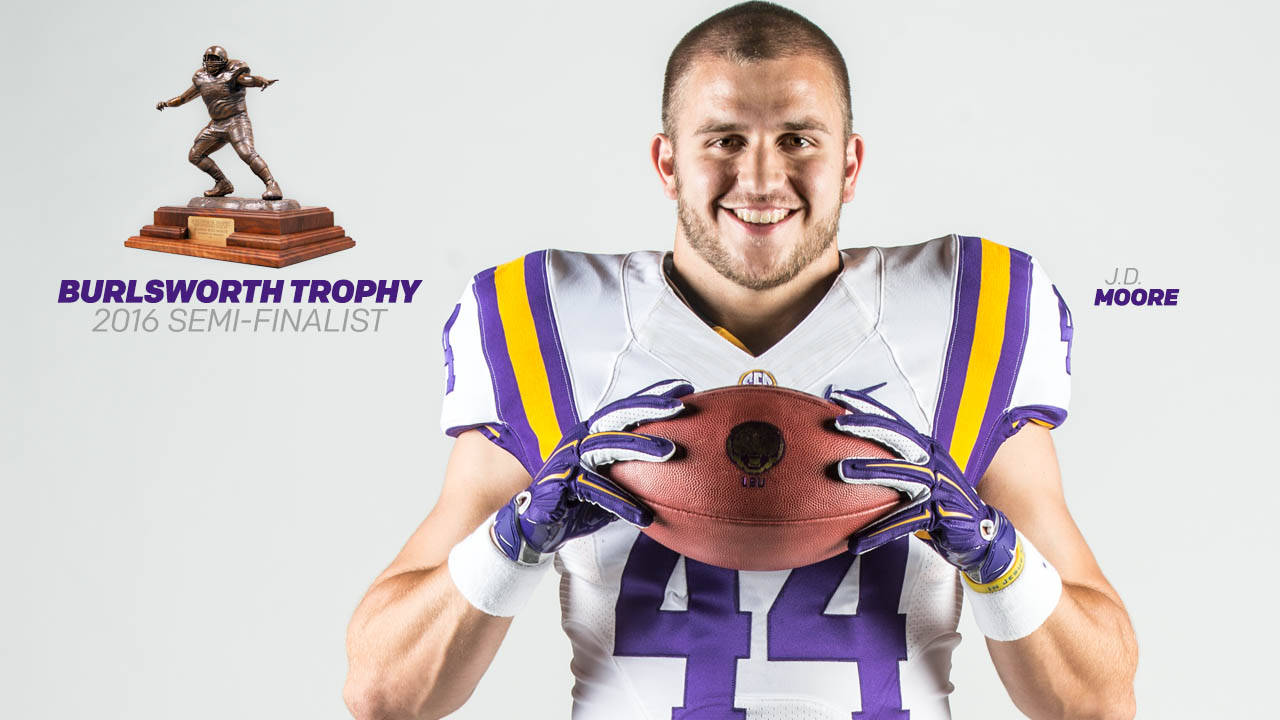 FAYETTEVILLE, Ark. – LSU junior fullback J.D. Moore was announced as one of 10 collegiate football players named a semi-finalist for the Burlsworth Trophy the organization announced on Tuesday.

The Burlsworth Trophy, named after former Arkansas lineman Brandon Burlsworth, is given to the most outstanding football player in America who began his career as a walk-on and has shown outstanding performance on the field.

Moore, a native of Ruston, Louisiana, has played in 22 games in his LSU career, earning six starts during that time as he’s served as an integral part of LSU’s powerful run game. He played in eight games as a freshman, playing in six last season before an injury sidelined him for the remainder of the season.

This year, Moore has been a valuable asset to an LSU ground game that is ranked 34th nationally averaging over 214 yards per game, paced by running backs Leonard Fournette, Derrius Guice and Darrel Williams. Fournette recently broke the LSU single-game rushing mark with 284 yards against Ole Miss, while Guice was the quickest back to 1,000 yards in LSU history and Williams earning his first 100-yard rushing game of his LSU career against Missouri with 130.

Majoring in architecture, Moore began his LSU career as a versatile prospect who trained at tight end in 2013 and most of 2014 before moving to fullback full-time prior to the 2015 season. He has twice been named to the SEC Academic Honor Roll.

Fans will be allowed to vote for their favorite player via the “GREATER” Fan Vote beginning today, Nov. 8 at 2:00 PM CST. Fans are limited to one vote per day, and the voting for the semi-finalist round will conclude on Nov. 13 at midnight CST. Voting can be accessed at www.burlsworthtrophy.com and will begin with the top 10 semi-finalists and continue as the selection committee announces the top three Burlsworth Trophy finalists on Nov. 15th.

The “GREATER” Fan Vote counts as 5 percent during each round of voting, and it is combined with the results from the Selection Committee.

Three finalists will be chosen for the seventh-annual award, with the winner being announced on Dec. 5 at the Springdale (Ark.) Rotary Club.

LSU returns to action this week, hitting the road to take on the Arkansas Razorbacks in Fayetteville.