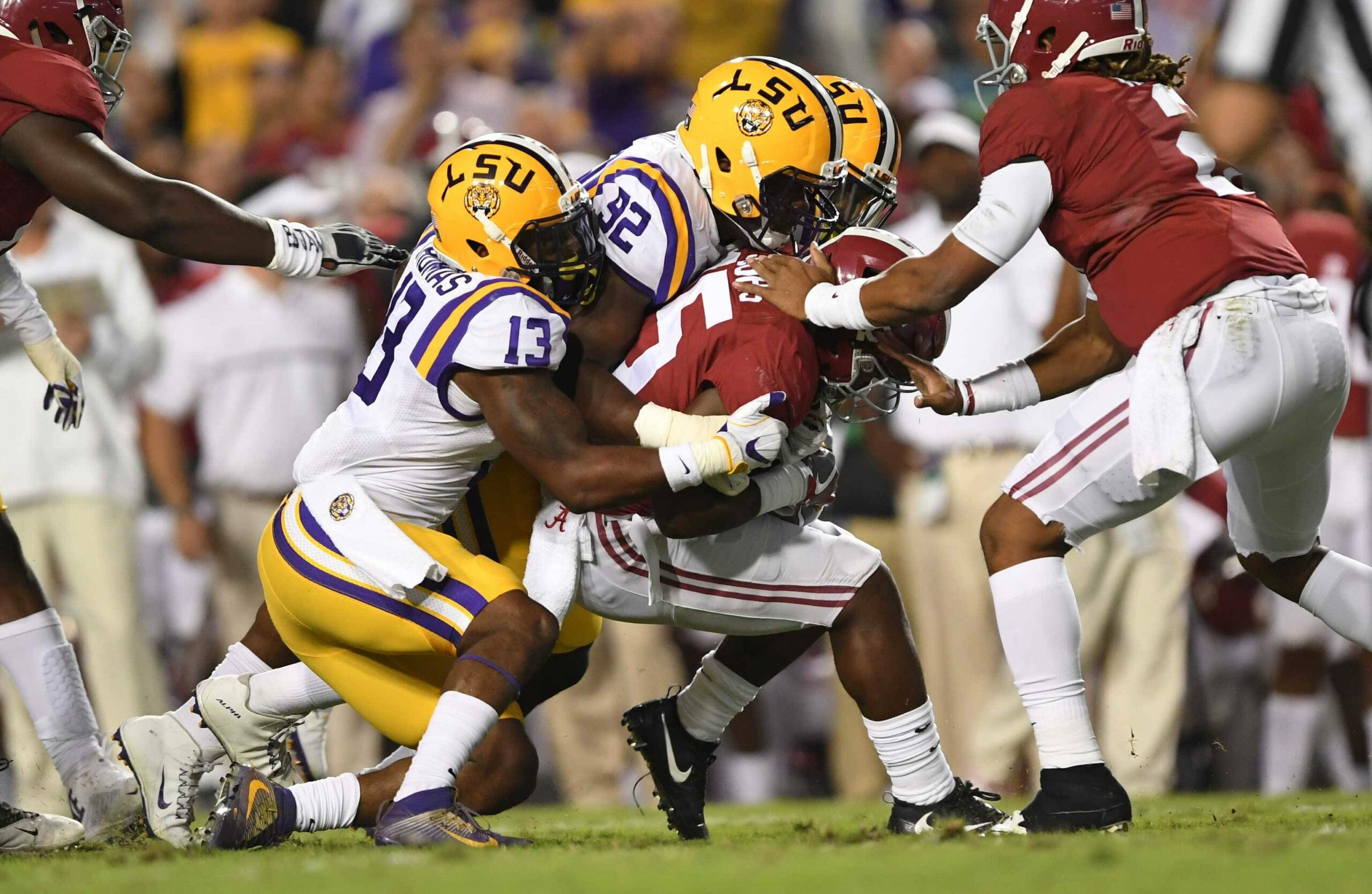 BATON ROUGE — No. 13 LSU played No. 1 Alabama to a scoreless tie through three quarters, but the Tide scored on consecutive fourth-quarter possessions to win 10-0 Saturday night in Tiger Stadium.

Alabama (9-0, 6-0 SEC) was shutout in the first half for the first time in 126 games, but quarterback Jalen Hurts’ shook loose in the final quarter to secure the victory.

Hurts ran for 114 yards and the game’s only touchdown, while passing for 107 yards with an interception. Alabama managed 323 yards of total offense, though the Tide didn’t score until Hurts’ 21-yard run with 13:08 to play.

LSU struggled to move the ball against the Tide defense, managing only 125 yards of total offense.

Quarterback Danny Etling was 11-of-24 passing for 92 yards with an interception. He was sacked five times. Leonard Fournette ran 17 times for 35 net yards.

Both teams missed field goals in the first half.

Kendell Beckwith led LSU with a career-best 16 tackles, while Lewis Neal also added a career-best with 11 to go along with two quarterback hurries.

LSU safety Jamal Adams intercepted Alabama quarterback Jalen Hurts on the Tide’s first drive, giving the Tigers possession at the Alabama 33-yard line. The pick was Adams’ first of the season and the fifth of his career.

The Tigers, however, were not able to capitalize on the opportunity, as Colby Delahoussaye‘s 49-yard field goal attempt was blocked by Alabama defensive back Ronnie Harrison.

Alabama sustained a second-quarter drive to the LSU 24-yard line, but the Tide’s Adam Griffith missed a 42-yard field goal try with 5:52 left in the first half.

The first half finished in a scoreless tie, marking the first time Alabama had been shut out in an opening half since 2007, when Florida State blanked the Tide through the first 30 minutes of play.

Alabama drove to the LSU eight-yard line on its first possession of the second half, but the Tigers’ defense stiffened, throwing Hurts for a five-yard loss on 4th-and-goal at the LSU one.

LSU forced Hurts to fumble on a pass attempt, and the Tigers recovered at the Alabama 42-yard line with 5:42 left in the third quarter. Defensive tackle Frank Herron was credited with the sack, and outside linebacker Arden Key pounced on the football.

The Tigers were unable to capitalize on the turnover, and punter Josh Growden pinned the Tide deep in its own territory with a kick to the 10-yard line.

Alabama responded by driving 90 yards on 12 plays for the game’s first score, as Hurts dashed 21 yards to the end zone with 13:08 remaining in the contest.

After picking up a first down with a 13-yard pass to tight end Colin Jeter, Etling was hit in the pocket by Ryan Anderson and intercepted at the Alabama 43 by Minkah Fitzpatrick.

Hurts again led the Tide into the LSU redzone, rushing seven times for 47 yards. Adam Griffith finished off a nearly 10-minute drive with a 25-yard field goal from the right hash to push Alabama ahead, 10-0, with 2:41 to play.

Attendance was announced as a capacity crowd of 102,321.