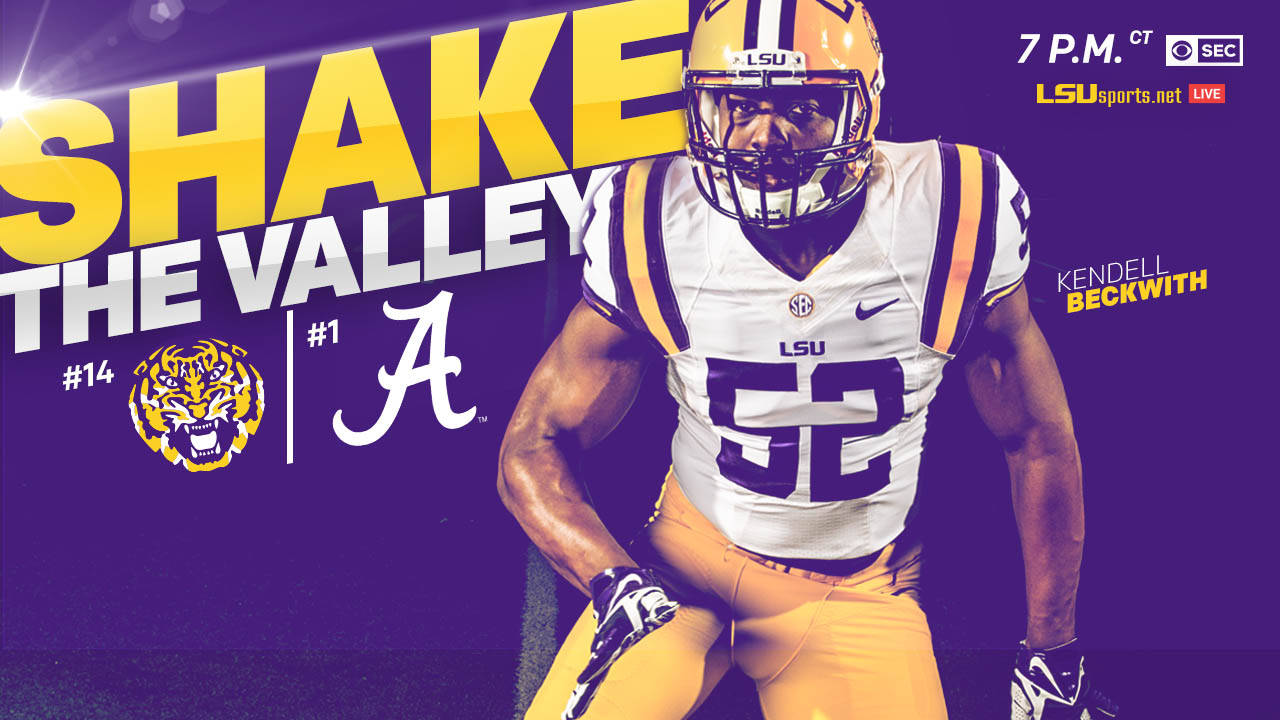 BATON ROUGE – The LSU campus, and in particular Tiger Stadium, will be the epicenter of college football tonight when the 13th-ranked Tigers host top-ranked and undefeated Alabama in a key Southeastern Conference Western Division contest in what has long been a sold out Death Valley.

Kickoff between the Tigers and Crimson Tide is set for 7 p.m. on CBS in what could likely by the last visit to Tiger Stadium for the Voice of SEC Football on CBS Verne Lundquist, who is retiring at the conclusion of the season. Lundquist is on the broadcast by Gary Danielson (analyst) and Allie LaForce (sideline reporter).

LSU, which is coming off an open date, has played its three best games of the season in consecutive weeks, all under new head coach Ed Orgeron. The Tigers have climbed to 5-2 overall and stand at 3-1 in SEC play. LSU used a dominant second half to blow open a tight game on its way to a 38-21 win over Ole Miss in its last outing two weeks ago.

Alabama, winners of 20 in a row dating back to last season, is 8-0 overall and 5-0 in league play. The Crimson Tide has won five straight over LSU, including a 30-16 victory a year ago in Tuscaloosa. LSU’s last win over Alabama came in 2011 when the Tigers posted a 9-6 overtime win at Bryant-Denny Stadium.

LSU’s Defensive Leaders
The Tigers, under first-year coordinator Dave Aranda, are led defensively by a pair of linebackers in Kendell Beckwith (69 tackles, 5.5 tackles for loss) and Duke Riley (59 tackles, 5.0 tackles for loss). Outside linebacker/defensive end Arden Key is among the national leaders in sacks with 8.0 and he’s added 34 total tackles and eight quarterback hurries. Safety Jamal Adams is LSU’s quarterback in the secondary and he’s produced 50 tackles for a Tiger defensive unit that has allowed only eight touchdowns all season, fewest in the nation.

The LSU Offensive Resurgence
LSU, under newly appointed coordinator Steve Ensminger, has thrived on offense, averaging 42 points and 536 yards in its last three games. LSU racked up 634 yards in a win over Missouri and then pounded out 515 yards in its last outing, a 38-21 victory over Ole Miss. One key to LSU’s success has been its ability to spread the field and get the ball in the hands of its playmakers. In its last three games, LSU has scored eight touchdowns of 40 yards or longer. Quarterback Danny Etling is 4-1 as LSU’s starter and he’s the first Tiger quarterback to thrown for 200 yards in three straight games since Zach Mettenberger in 2013. In six games, Etling has connected on 89-of-147 passes for 1,129 yards, seven touchdowns and only three interceptions.

The Fournette Factor
LSU junior running back sensation Leonard Fournette is healthy for the first time all year and he’s coming off a school-record 284-yard performance against Ole Miss two weeks ago. In six games, Fournette has rushed for 670 yards and five touchdowns. He’s averaging 8.1 yards every time he rushes the ball and his per game average stands at 167.5 a contest. Fournette has rushed for 100-yards or more in seven straight games. Fournette, along with Derrius Guice, will get the luxury of running behind an LSU offensive line that is completely healthy for the first time since the season-opener as right tackle Toby Weathersby is expected to return to action tonight.

The O Impact
LSU coach Ed Orgeron has energized both the Tigers and the fans base over the past month, instilling a practice-with-a-purpose approach with a distinct focus each day of the week. The results have been immediate and overwhelming as the Tigers are 3-0 under Orgeron winning each game by at least 17 points. LSU has also outscored its opponents 73-7 in the second half under Coach O and the Tigers have broken at least one offensive school record in each of the three games Orgeron has coached.

What To Watch For From Alabama
The Crimson Tide, with true freshman Jalen Hurts, is explosive on offense, averaging 43.9 points and 498.0 total yards (264.8 rushing, 233.2 passing) per game. Alabama has scored at least 33 points in every game this year and they’ve exceeded the 40-point mark five times. Hurts is a dual-threat quarterback who is averaging 65.1 yards on the ground and another 197.2 yards through the air. He’s accounted for 21 touchdowns (12 passing, 9 rushing). His top target is Calvin Ridley (44 rec., 497 yards, 5 TDs). Defensively, the Crimson Tide have scored 12 non-offensive touchdowns this year and they have racked up 32 sacks, 64 tackles for loss and forced 16 turnovers.

On the week of preparation …
We had a great week of preparation. We understand the tradition here. Guys are coming back. They feel welcome, and it’s very powerful for the LSU family. Obviously we have a tall task at hand. I know there are a lot of things going on out there, but we are in our little cocoon here. We are focusing in on this football game. It’s a big game for our fans, a big game for our team and a big game for our coaching staff. We realize that, but it’s game four of our new season. We are going to take it one game at a time and get after it.”

On their players only meeting Thursday …
“I like it. I’m for it. I didn’t want to be in here. I didn’t want a coach in here.  They wanted it; I gave it to them. It lasted for 15 minutes. I came back and you could hear a pin drop in this room. Those things are great for team bonding. It doesn’t mean you are going to win or going to play better or anything like that, but every once and a while if they feel like they need to have a meeting, I like it. Leadership comes forward.”

On quarterback Danny Etling‘s preparation this week …
“Excellent. Excellent day, excellent week. Protection has been good. We have rushed him as hard as we possibly could to simulate their great rush. He’s going to get hit Saturday night. He’s going to get sacked, but I really believe he will respond.”

“He’s looked great, good, a little rusty at times. Maea (Teuhema) has done a good job for us at right tackle, so that’s an extra bonus, him being ready. I really want to commend Jack (Marucci), our trainer, for getting him ready as fast as they possibly could. He’s done a tremendous job.”