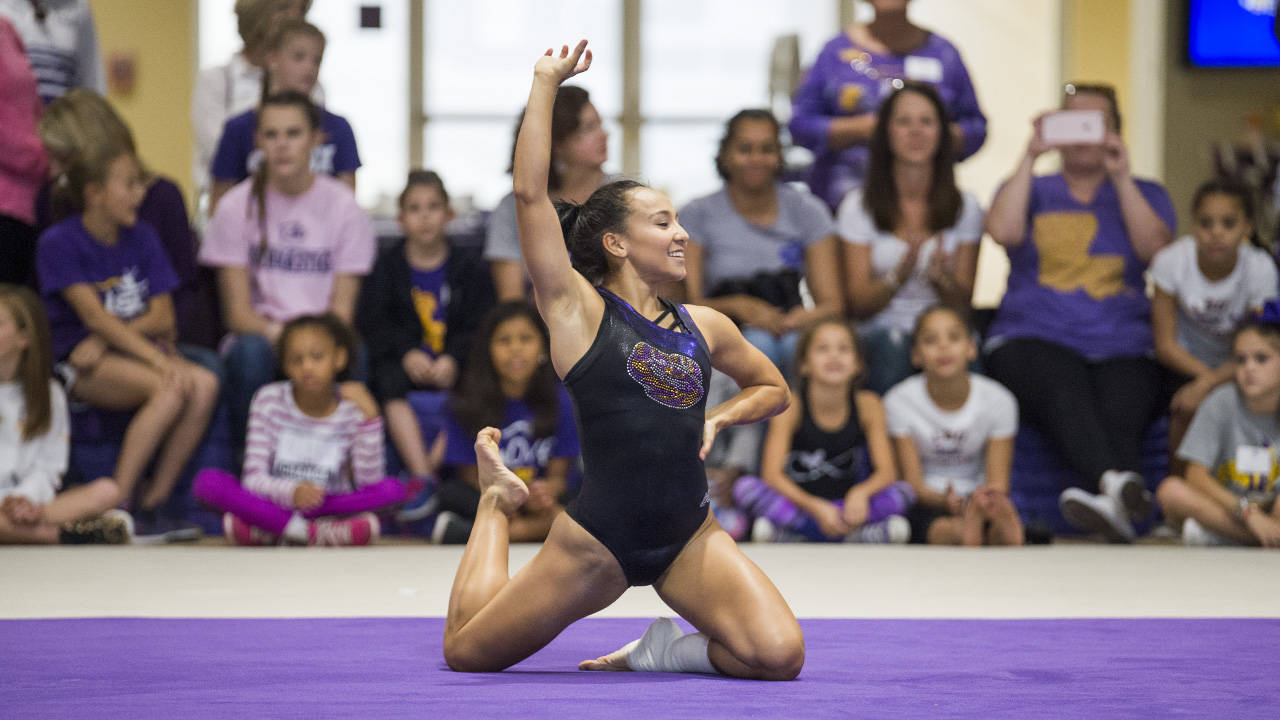 BATON ROUGE – The LSU gymnastics team competed in its second full intrasquad and posted a strong score of mid-197 in front of more than 90 donors, friends and family members Friday afternoon at the Gymnastics Training Facility

“We are in a great place, and I have to give the credit to our incredible facility and staff,” head coach D-D Breaux said. “This team has done all the right things. They have prepared and are on target to be where they need to be. Our target date is Gym 101 but to do what we have been doing is great.”

The squad opened with five scores of 9.90 or better on vault for a total of 49.425. Freshmen Kennedi Edney and Ruby Harrold posted strong scores of 9.90 and 9.85 respectively. Returnees Julianna Cannamela, Myia Hambrick and Sydney Ewing also scored 9.90’s in the opening rotation.

LSU carried the strong start into bars where the lineup posted a 49.575. Lexie Priessman, a second team All-American in 2016, posted the highest score of the rotation with a 9.95. Hambrick filled in the third spot of the rotation and tallied a score of 9.925.

Erin Macadaeg continued her leadoff spot on beam with an outstanding 9.95 as the Tigers posted a 49.450. Finnegan, Ewing and Lauren Li also scored 9.90’s in the beam lineup.

LSU finished off the intrasquad with another exciting lineup of floor routines. With the team’s routines completed just a week ago, the intrasquad marked just the fifth time the Tigers had performed their routine. Hambrick and Ewing led the way in the final event with scores of 9.875.

“Our balance beam was great today and our bars were spectacular,” Breaux said. “Our tumbling was also strong in just the fifth time we have asked our kids to do full floor sets. I think we are in a great place. We have a great amount of depth, and we want to develop it to have nine or 10 people ready to go in an event. I think today was an indication of our team competing for a spot in the lineup.”

Following the intrasquad, the gymnasts, coaches and support staff met with many supporters of the program in a social on the balcony and second floor of the training facility.

“It’s so nice to see so many people here on a Friday afternoon,” Breaux added. “It means that this team is respected and that the community is reaching back out to us. There is so much enthusiasm and excitement about this team. We have to keep the momentum going into final exams and the holidays so that we are ready for January.”

The season ticket request list is free to join and is available now for the upcoming season at www.LSUtix.net. All new seating will be assigned based on LSU priority point ranking as of Oct. 31, 2016.

LSU will host six home meets in the Maravich Center in 2017, starting with Southeastern Conference power Georgia. The Tigers will also take on Texas Woman’s, New Hampshire, Iowa and George Washington along with SEC foes Missouri and Florida.

LSU will offer a free preview of the 2017 team in Gymnastics 101on Monday, Dec. 12 inside the Maravich Center. Labeled a “Gymnastics Showcase,” Gymnastics 101 will provide fans a first look at the 2017 Tigers who will perform routines on all four events.