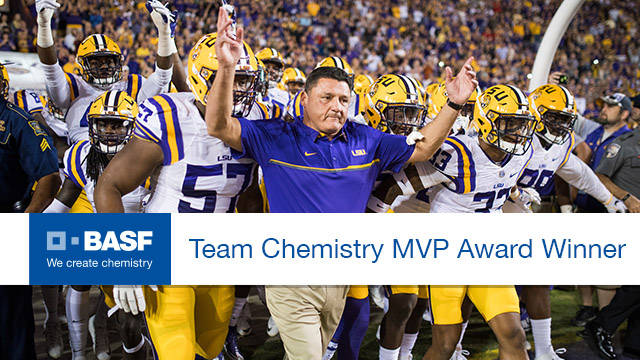 The Tigers, under head coach Ed Orgeron, improved their record to 5-2 overall on the year and 3-1 in the SEC, rising up in the rankings to No. 15 and No. 14 in the Associated Press and Amway Coaches Top 25 Polls. On Wednesday, LSU came in at No. 13 in the first College Football Playoff ranking marking the third consecutive season that the team has featured in the first poll of the year.

In Orgeron’s debut, LSU amassed 634 yards of total offense and dominated Missouri on both sides of the ball to hand the first-time visitors to Tiger Stadium a 42-7 defeat. Orgeron took over as interim head coach following a 2-2 start to the 2016 season. LSU running backs Derrius Guice and Darrel Williams led the Tigers to a school record for total offense in SEC games, previously 630 yards set in 1987 at Ole Miss and 1967 against Mississippi State.

LSU had five touchdown drives of three plays or less, as the quick-strike Tigers shook off an unexpected week of rust to defeat Southern Miss, 45-10, on Saturday in Tiger Stadium. Danny Etling connected on touchdown passes of 80 and 63 yards, while Guice had touchdown runs of 61 and 20 yards in a 28-point third-quarter outburst that ended the Eagles’ upset bid. The Tigers extended a non-conference winning streak to 47 games in Tiger Stadium. Kendell Beckwith led the way with a career-best 15 tackles including two behind the line.

Leonard Fournette set a school record with 284 rushing yards, as LSU pitched a second-half shutout of the Rebels, 38-21, on a late Saturday night in Tiger Stadium. LSU, which was tied 21-21 at the half, dominated the final 30 minutes of play, allowing only 54 yards of total offense in the second half until the game’s final drive. Fournette needed only 16 carries to break Alley Broussard’s 2004 record of 250 yards, which was also set against Ole Miss. He scored on runs of 59, 76 and 78 yards, averaging a school-record 17.8 yards per carry (minimum 15 carries). Duke Riley logged a career-high 15 tackles in the contest. He had five solo stops as well as 1.5 TFL and an interception.

LSU returns to action on Saturday night, hosting the Alabama Crimson Tied at 7 p.m. in Tiger Stadium. The game will be televised by CBS.