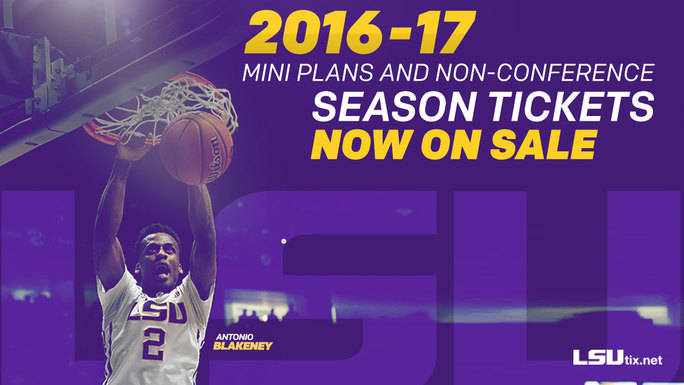 BATON ROUGE – The LSU Athletics Ticket Office has put single-game non-conference tickets and the popular three and five-game mini-plans on sale for the 2016-17 men’s basketball season.

Season tickets as well as group tickets of 10 or more for all games remain on sale for the 16-game home men’s basketball schedule that begins on Saturday, Nov. 12, at 1 p.m. against Wofford. The Tigers will play a free exhibition game on Monday night, Nov. 7, at 7 p.m. against Reinhardt.

The Pick 3 Mini Plan sells for $39 and includes seats for any three games during the non-conference or SEC season, while the Pick 5 Mini-Plan includes five games at any time during the season for $60.

In choosing tickets, fans can go to LSUtix.net to buy their tickets and use the “Pick Your Own Seat” map which allows fans to see exactly what is available for sale. Tickets can also be purchased on weekdays from 8 a.m. to 5 p.m. by phone at 225-578-2184 or 800-960-8587 or in person at the Athletics Administration Building.

League play opens early this year, Dec. 29, with the annual Gold Game and that will be against Vanderbilt. LSU will play such teams at Alabama, Arkansas, Texas A&M and Florida during the league schedule at the Maravich Center. Single game Southeastern Conference game tickets go on sale Nov. 30.