LSU At the Game: Bond Brothers 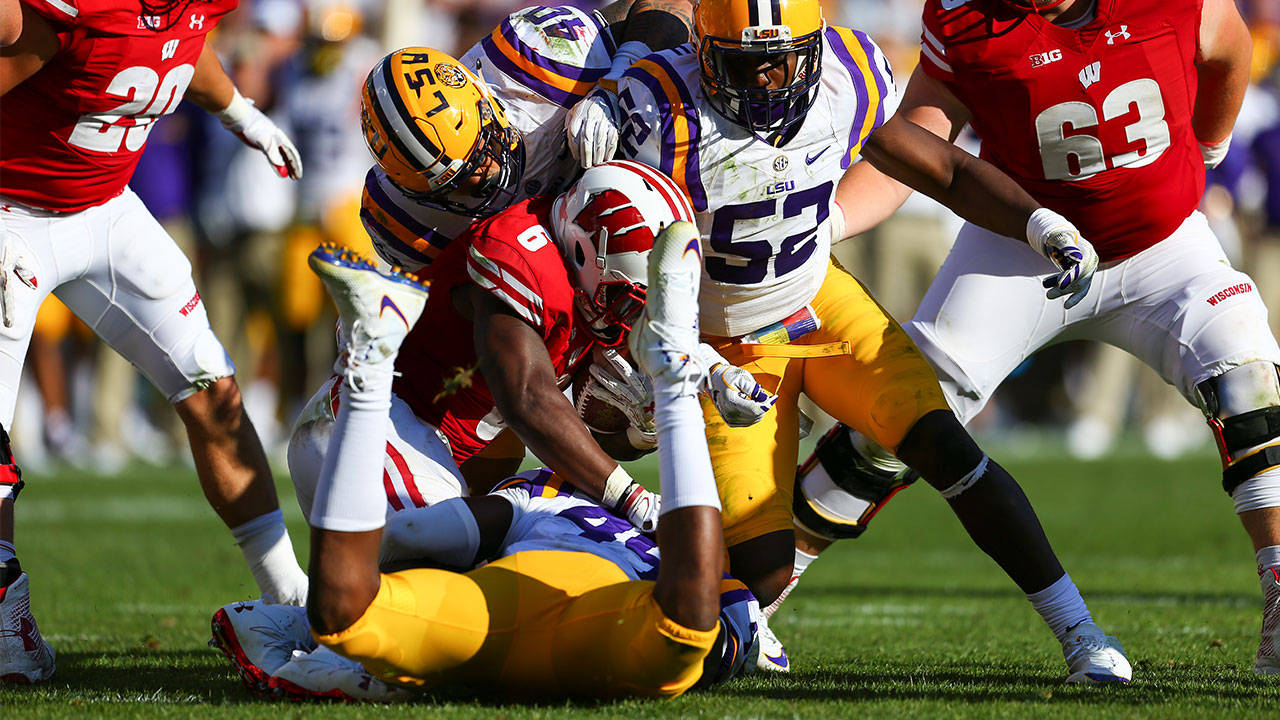 When Duke Riley made his first career interception two weeks ago against Ole Miss, one of the first people there to congratulate him was fellow linebacker Kendell Beckwith.

That can be attributed to the tight bond the two players share. It’s a bond so tight that Riley refers to it as a “James Bond.”

The two Louisiana natives showed up on campus in 2013, both driven to come to LSU due to their close proximity to the school, but their paths to success in purple and gold could not be more different.

On one hand you have Beckwith, a player who came in and excelled very early on. On the other hand, you have Riley, a competitor who has grinded his way from a special teams guy to now being a major piece to the puzzle on the LSU defense.

Beckwith came in as a freshman and began to make an impact very quickly. During the Florida game in the 2013 season, the Clinton, La., native made a strip sack on a 4th down as Florida tried to mount a comeback in the waning minutes. LSU won the game, 17-6.

After that game, Beckwith began to see an increase in playing time. It must be something with playing Florida, because he made his first career start against the Gators in his sophomore season. Beckwith continued his impressive second season by being named the Southeastern Defensive Player of the Week after his 11-tackle performance in a win over No. 3 Ole Miss.

As his career has gone on, Beckwith has continued to improve. Last year, in his junior season, he was named a semifinalist for both the Bednarik and Butkus awards.

Being so successful at a young age could make some players stop working hard, but for Beckwith the desire to get better has never faded.

“Everything starts in practice,” the senior said. “You have to really study your opponent so you are out there reacting and can have a sense of what they are doing so that way you can play fast and make plays.”

At the end of last season many people thought he could put his name into the NFL draft. Despite what some so-called experts were saying, Beckwith personally did not feel like he was ready to take his game into the NFL.

“Personally I felt like I wasn’t ready yet. I felt like I had a lot of things that I still needed to improve on. That’s why I made the ultimate decision to come back to school to try to improve and be more ready,” Beckwith said.

As the season has gone along it seems as though Beckwith has been improving, and he has made his impact known on the field once again.

As the other “Bond Brother,” Riley has had a more difficult road to success. Although he saw sprinkled time in at linebacker, Riley’s main impact in his early LSU career was mostly seen as a member on special teams.

“I knew when I came in here that I’d have to make a name for myself on special teams first before I started playing more,” Riley explained.

“I knew with Deion being gone I had big shoes to fill. I just had to step up to the plate and do my part,” Riley said.

When Riley was being recruited, there were a handful of other schools that wanted him, but there was only one school that he wanted, LSU.

So when that linebacker spot opened up heading into his senior season, Riley was ready to jump on it. In spring practice he excelled, earning multiple team awards, including the Mike Miley Leadership award for outstanding leadership on defense.

Riley carried the momentum he built in the spring into this fall for his most productive season yet. The game last month against Ole Miss may have been his coming-out party.

“Once I step between the lines I’m a completely different person. It’s just ‘see ball, get ball,’” Riley explained in the days leading up the matchup with Ole Miss.

When he said, “see ball get ball,” he really meant it, too. Against Ole Miss, Riley led the LSU defense with 15 tackles and made his first career interception in the third quarter.

Beckwith was so happy for his teammate that he tackled him to the ground during the celebration immediately following the interception. Riley was in such shock that he had to ask Beckwith if that really just happened.

The LSU defense has been stifling this season. Of course, Beckwith and Riley lead the team in tackles, with 69 and 59, respectively.

The Tigers’ ferocious defensive attack, fueled by new defensive coordinator Dave Aranda, is ranked 12th in rushing defense this season. LSU only gives up 104.1 yards per game on the ground.

Riley attributes the success to Aranda saying, “He’s made the defense so simple for us to understand. We’re just getting lined up and playing. It’s basically ‘can you beat the guy in front of you?’ He’s not giving us too much to worry about.”

Aranda came in this season and brought with him a 3-4 scheme, allowing the inside linebackers to roam free. He also brought with him an ability to understand formations and offensive schemes that has allowed this defense to anticipate what will be coming at them on the next play.

“The number one thing is to have awareness of what the offense is trying to accomplish,” Aranda said. “We have to know how they run their top run plays and the formations they present to you. Then you have to have anticipation of this run coming from this formation, or that run is from that formation. When you have those things and that is an understood pre-snap ability, then there is the ability to now anticipate who is blocking you. And then you get down to playing ball.”

Of course, it is the linebackers that lead that rushing defensive attack. Beckwith and Riley take pride in stopping the run, and they know how critical they are in this defense’s success. They also play a critical role in the passing game.

Another player who realizes how crucial the linebackers are in this defense is star defensive back Tre’Davious White.

Whether they are stuffing the run or helping in the pass defense, Beckwith and Riley show up ready to play every game. The relationship that the two share off the field only improves their on-field performance.

“With me and Duke coming into LSU together and growing together, it’s great having somebody like that to line up next to,” Beckwith explained.

The “Bond Brothers” will continue to make plays as Beckwith and Riley look to finish off their LSU careers with a bang.