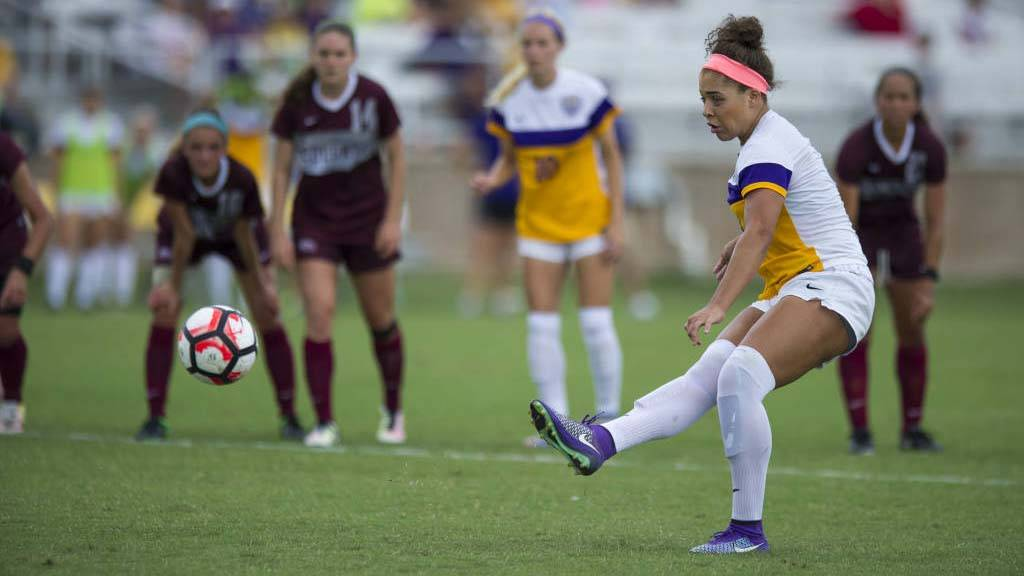 BATON ROUGE – All-SEC striker Jorian Baucom drew LSU level with a penalty kick in the 67th minute for her first goal of the 2016 season, but Abby Sotomayor scored the winner for the visitors just seven minutes later as Colgate took home a 2-1 win over the homestanding Tigers on Sunday afternoon at the LSU Soccer Stadium.

With the Tigers (1-3) trailing 1-0 midway through the second half, Baucom was played into space down the right flank where she faced up the Colgate (1-0-2) left back, dribbled past her defender and raced toward goal seemingly one-on-one with goalkeeper Kelly Chiavaro. Her path to goal was cut short as she was taken down in the area by a recovering defender.

Chiavaro was helpless as Baucom buried the ensuing spot kick to draw the home side level at 1-1 with her first goal of the season and 24th of her career, tying senior Summer Clarke as LSU’s active career leaders.

The Raiders took back the initiative with just over 16 minutes to play in regulation when senior forward Ginny Whitman controlled a floated ball into the right side of the box near the end line and squared to Sotomayor inside the six-yard box for a tap-in finish in the 74th minute of play. Sotomayor’s team-leading second goal of the season proved to be the game-winner as Colgate remained unbeaten in three matches this season.

Junior Eliza Doll, the Patriot League’s Preseason Midfielder of the Year, gave the visitors a 1-0 lead at the break as she curled a 19-yard free kick over LSU’s wall and inside the right post in the 39th minute.

Freshman midfielder Caitlin Cantrill came closest to putting the Tigers on the board in the first half as she forced Chiavaro into action with a shot on target near the spot following Debbie Hahn‘s free kick taken from the right side in the 24th minute. Junior midfielder Zoe Higgins later trapped a floated ball by Baucom eight yards out and fired on frame in the 36th minute before Doll broke the deadlock.

The Tigers continued to push for a late equalizer as they peppered the Raider goal in the dying minutes. Chiavaro made a fine diving save to her right to deny sophomore Alex Thomas an open look from eight yards out just beyond the right side of the six-yard box, and recovered to keep out the rebound by senior forward Delaney Sheehan as the clock reached 10 minutes to play. Clarke then fired a second rebound over the crossbar as the ball rolled into her path at the edge of the penalty area.

Baucom then nearly sent the match into extra time when her close-range header in the 87th minute appeared destined for the top-right corner of the net, but Chiavaro was in position once again to deny the Tigers the equalizer and punched the ball over the crossbar for a late corner kick. Three of Baucom’s four shot attempts in the match found the target as she helped lead the attack going forward.

Baucom, Thomas and Sheehan matched one another with four shots on the afternoon as the Tigers finished the match with 21 total attempts and eight shots on goal along with six corner kick in the 90 minutes.

The Tigers will look to snap their two-game skid while opening up a four-game road swing next weekend as they travel to Bloomington, Indiana, for the Hoosier Challenge Cup where they face tournament host Indiana on Friday and Butler next Sunday, Sept. 4, in a pair of 2 p.m. CT kickoffs. They defeated the Hoosiers by a 4-0 margin in the reverse fixture at the Stomp In The Swamp in Baton Rouge on Sept. 6 of last season.