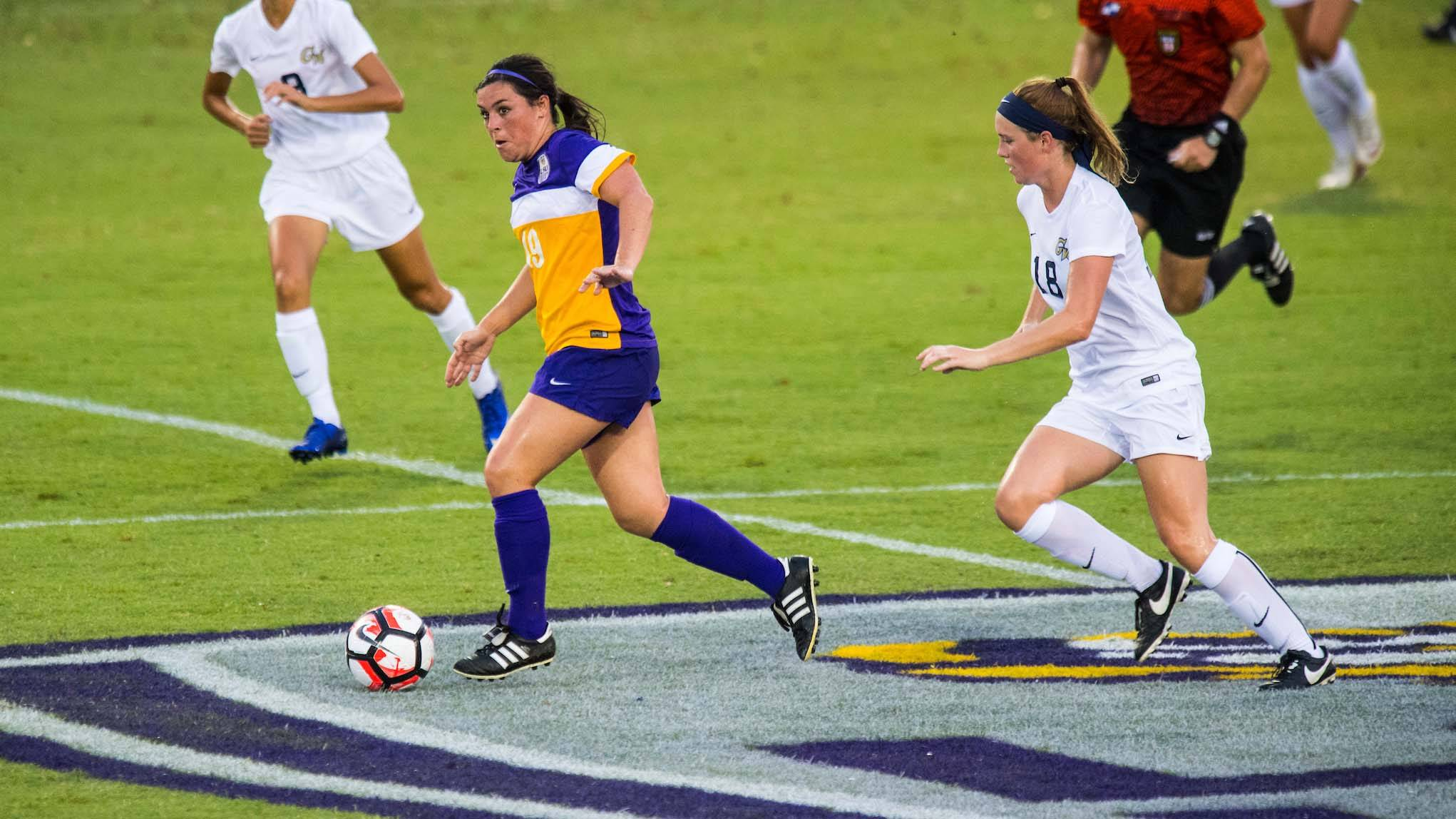 BATON ROUGE – LSU’s junior forward Delaney Sheehan scored her first career goal in the purple and gold with a 12-yard strike five minutes from time, but the Tigers dropped their 2016 home opener to reigning Atlantic 10 Conference champion George Washington by a 3-1 scoreline on Thursday night at the LSU Soccer Stadium.

With the Tigers (1-2) trailing late in the match, Sheehan controlled an entry pass into the box from deep by sophomore defender Alex Thomas, turned and fired a left-footed strike past Colonial goalkeeper Anna Tapen to pull a goal back for the home side in the 85th minute. Sheehan scored her first goal in her fifth career appearance as an LSU Tiger.

Leading scorer and First-Team All-Atlantic 10 striker MacKenzie Cowley and junior forward Brittany Cooper provided the firepower as the Colonials (3-0) earned the victory in the inaugural meeting in the series.

Cowley gave the visitors an early advantage in the 12th minute when she stuffed the rebound into the back of the net from close range off Charley Prevost’s deflected cross into the box from the right side for her third goal of the season. Cowley is off to a flying start to the season with three goals in three games after scoring a career-high 10 goals in her all-conference campaign a year ago.

Cooper scored her first goal of the night just three minutes into the second half with a shot from distance that skimmed the underside of the crossbar for what proved to be the game-winner. She put the match out of reach with her second in the 75th minute after she received possession from teammate Olivia Di Cristofaro in the left side of the area and curled her effort from the top of the box inside the far post for 3-0.

The Tigers were not without their own opportunities on the night as freshman midfielder Caitlin Cantrill nearly opened her account with her first career goal in the 25th minute with George Washington leading 1-0.

With the home side on the attack, senior striker Summer Clarke played Cantrill into space in the right side of the box as the Australian international found herself on a breakaway one-on-one with George Washington’s starting goalkeeper Miranda Horn. Horn was up to the task as she denied Cantrill her first goal of the season from eight yards out with the first of her three saves on the night.

Clarke nearly equalized herself two minutes later when she forced Horn to make a diving save to her right on a shot from 12 yards in the right side of the penalty area. Thomas was later denied the tying goal before the break when she skipped across the top of the box and put a left-footed effort on frame forcing a save in the 41st minute.

Each of Thomas’ two shots on the night found the target as she was certainly a bright spot in the attack throughout the match. She nearly made it a grandstand finish for the Tigers in the final minutes as she forced Tapen, George Washington’s substitute goalkeeper, into action with a slaloming run through the heart of the Colonial defense and an open look on goal from 10th yards in the 88th minute.

LSU finished with 17 total attempts and six shots on target on the night, while the Colonials were efficient with their opportunities as six of their eight shots in the match found the frame over the 90 minutes.

The Tigers wrap up their home-opening weekend Sunday when they welcome the Colgate Raiders to Baton Rouge for a match that is set to kick off at Noon CT at the LSU Soccer Stadium. They open up their four-game road swing with a trip to Bloomington, Indiana, for the Hoosier Challenge Cup where they face Indiana on Sept. 2 and Butler on Sept. 4 in a pair of 2 p.m. CT kickoffs.