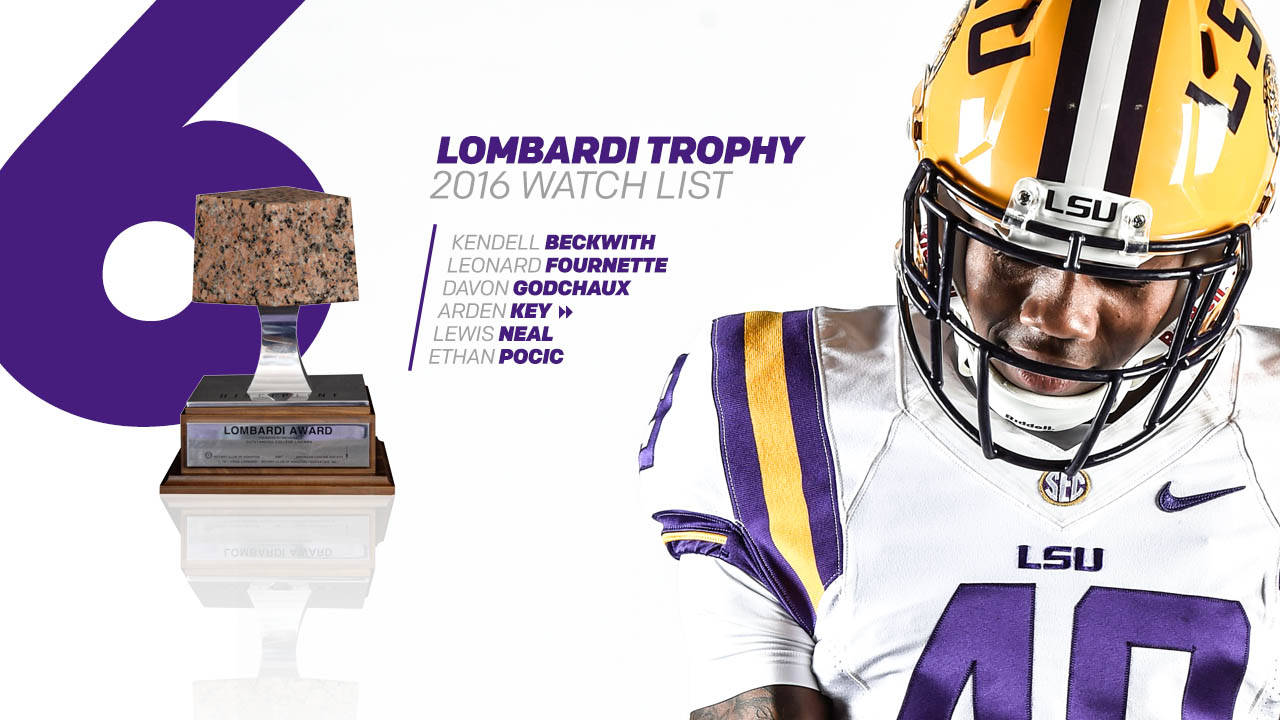 The six LSU football players were among 158 candidates to make the initial list for the award to the player that demonstrates outstanding performance and skill in offensive or defensive positions and best exemplify the discipline, virtue and wisdom that defined Vincent Lombardi’s exceptional brand of leadership.

The players selected for the watch list were chosen by earning All-American honors, being named to their respective all-conference teams, or by receiving 2016 pre-season honors.

Beckwith, on the watch lists for the Butkus, Nagurski and Bednarik awards, returned to LSU for his senior season this year and is coming off of a junior campaign where he finished second on the team in tackles with 84, including have 10.0 tackles for loss and 3.5 sacks.

After setting the single-season record for rushing yards with 1,953, Fournette embarks on his junior season after leading the Southeastern Conference and the nation in rushing a year ago averaging 162.8 yards per carry on the ground and scoring 22 touchdowns, with four of those coming in the Texas Bowl win over Texas Tech in December.

A two-year starter at defensive tackle, Godchaux started 12 games at the position as a sophomore in 2015 in helping LSU have one of the stingiest running defenses in the conference allowing just 122.9 yards per game, earning 6.0 sacks and 9.0 tackles for loss on the year.

Key was named a Freshman All-American by ESPN.com and 247 Sports, along with being named to the SEC All-Freshman Team after he played in all 12 games and starting the last nine last year, collecting 41 tackles, 6.5 tackles for loss and 5.0 sacks.

The second of the senior trio to make the cut includes Neal, currently on the watch list for the Nagurski and Hendricks Awards. Neal’s 8.0 sacks in 2015 tied for the 10th most in a single year for an LSU defender, starting all 12 games at defensive end where he was named the SEC Defensive Player of the Week after registering three sacks against Florida.

The final Tiger to make the cut is Pocic who twice last season was named the SEC’s Offensive Lineman of the Week, making all 12 starts at center in helping LSU’s potent rushing attack rank as high as seventh nationally with over 250 yards per game.

Following the preliminary watch list, a nomination period will open to the internal selection committee to add additional players who meet the skill and leadership standards set forth for the Rotary Lombardi Award. The award ceremony date will be announced later in the football season along with updated lists of award candidates.